Nushupiq Kilabuk wakes up every day in a shack on the shores Frobisher Bay in Iqaluit with only a lantern and a camping stove to keep him warm — but he says he’s one of the lucky ones.

Next to his shack, which he built himself a little over four years ago, there are two abandoned boats. One is a wooden fishing boat with a small front cabin, the other, an overturned canoe. Inside the fishing boat are sleeping bags and a jerrycan. Underneath the overturned canoe is a mat and an empty packet of cigarettes.

People have been sleeping in and under these boats at night — often several people crowded together to escape the elements.

That’s why Kilabuk believes he’s fortunate for his shack.

“I thank God for the abundance of what I have. But the people around me that are sleeping around in the boats … I have warmth. I’m lucky. I feel bad for them,” he said Friday.

“But I feel bad for myself too because I don’t have an apartment or running water or power.”

Kilabuk is one of many homeless Inuit living in dilapidated shacks along Frobisher Bay. Some are families with small children. Some are elders. Some, like Kilabuk, do have jobs and incomes, but simply cannot afford the steep rents for homes and apartments.

A Canada Mortgage and Housing Corporation report published last year found the average monthly rent for a two-bedroom apartment in Iqaluit was $2,648 in 2017.

There is also a major shortage of housing across the vast territory of Nunavut.

The federal government estimates Nunavut needs more than 3,000 units to meet its current housing demand, with over 4,900 individuals on waiting lists.

That’s why Prime Minister Justin Trudeau was keen to call a media conference during his two-day visit to the territory to announce a new housing agreement with Nunavut.

It will provide $290 million over eight years to “protect, renew and expand” social and community housing, as well as repair and build affordable homes across the territory.

“We recognize that this is a big step forward that is going to make a huge difference in creating thousands of homes and we know this is really going to make a tangible impact in the lives of people here in the North,” Trudeau said in Iqaluit.

The newly allocated money will flow to the territory under the Trudeau government’s previously announced, decade-long national housing strategy.

Nunavut Premier Joe Savikataaq and Iqaluit Mayor Madeleine Redfern stood next to Trudeau and expressed gratitude for the federal cash — but both also noted that more is needed.

“It is a housing crisis,” Savikataaq said.

“Nunavut is a cold and harsh environment and it’s no place for anyone to be homeless and we’re happy for this funding. We also need transitional housing and homeless shelter funding.

“This is like the tip of the iceberg, but we are thankful for what we’re getting and we’ll be working with the federal government to come up with a good strategy in terms of how to alleviate more of our housing crisis here.”

In some areas up to 16 people share a two-bedroom house, she said. Many have taken to couch surfing to keep from ending up on the street.

“The fact is, $290 million is going to help … there will be multiplexes built all over the territory and it will alleviate some of the pressure,” she said.

“But as the premier said, we do definitely need to look at finding other solutions to provide affordable housing for our people.”

Qaumariaq Inuqtaqau has been trying to raise public awareness about the plight of the homeless in Iqaluit for the last few years. He is disappointed in the government’s response to date and is skeptical that Trudeau’s funding announcement will make a difference.

He has clashed with the mayor and has become known for his outspoken advocacy, namely though a Facebook page that he manages called “Shame on Canada.”

He said he’s been asked to stop being so vocal in his outrage over the plight of the poverty-stricken and homeless Inuit, but he vows he will not be silenced.

“I’ve already lost too many friends, family, loved ones due to depression, homelessness, poverty. I’m not going to sit there and be quiet.”

After being homeless for many years himself, Inuqtaqau now rents a couch in a friend’s apartment.

He believes part of the problem is that Inuit are not being given adequate access to jobs.

When cold temperatures begin to set in, some are forced to make desperate choices.

“A few of them have no other choice than to commit a crime and go to jail for the winter. They get themselves a criminal record just to stay in a warm place in the winter,” Kilabuk said, shaking his head.

That’s why he’s happy for his shack. Even though several sheds catch fire every year. Many have scorched blotches on their walls and are filled with holes that let ice and snow in.

“Every day, I wake up and think, it’s going to be a good day. A better day than yesterday, even though I still live like this,” Kilabuk said.

“Someday, I’ll get housing. But out here, it’s a good view,” he added, pointing to the blue icebergs dotting the shores of the bay. 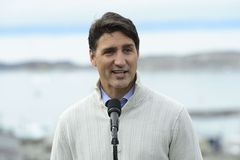