The latest legal action is from the Okanagan Indian Band. Chief Byron Louis credits the government for making “significant progress" nationally. But at his own reserve just west of Vernon, B.C. (known as Okanagan No. 1), only one of its half-dozen water systems has been recently modernized; the others remain little changed from when they were built in the 1970s and 80s. The band’s list of complaints is long: occasional detection of coliforms, water that smells like rotten eggs, chronic shortages and band members forced to buy bottled water.

“What they’ve done is woefully inadequate” at Okanagan No. 1, he said.

This summer, the Okanagan Band sued the Attorney-General of Canada in federal court, seeking an order compelling the government to fund ambitious improvements to its water service. (In 2017, a consultant drafted a plan the band says would have provided safe, adequate service including fire protection throughout the reserve, at an estimated total cost of $45-million.)

The federal Indigenous Services department expressed surprise over the lawsuit and emphasized that the reserve’s water was perfectly safe. The lawsuit is nearly identical to another filed in 2014 by four bands in Alberta: Tsuut’ina Nation, Sucker Creek First Nation, Ermineskin Cree Nation and the Blood Tribe. Although the four bands had effectively agreed to put that suit on hold amid negotiations with the federal government, three of the bands said in a joint statement on Sept. 19 that they’ve decided to end that ceasefire "because we have been unable to achieve a meaningful resolution to the protracted crisis of unsafe drinking water on our reserves.” (The fourth, Tsuut’ina Nation, declined to comment.)

The government said that water quality and infrastructure on those four reserves met federal guidelines, in a written response to The Globe and Mail on Sept. 25. It added that it had invested $28.4-million on improvements since 2014.

These lawsuits highlight the chasm between the water service many First Nations want and what Ottawa is willing to provide.

Since Mr. Trudeau issued his promise during the 2015 election campaign, his government has focused on eliminating "long-term” drinking-water advisories on reserves. (An advisory is a public warning about hazards in drinking water; the most common variety is a boil water advisory, issued when boiling will eliminate the hazard. The government considers an advisory to be long-term if it lasts longer than one year.) Federal data show his government has nearly halved the number of such advisories from the 105 in progress as of early 2016, often by building new water-treatment plants or by repairing and upgrading existing ones.

The thrust of the lawsuits is that simply ending advisories won’t cut it, and that the federal government is legally obliged to provide reserves with water service equivalent to that enjoyed by Canadians living off reserves. “We should be able to turn on the taps and get the same assurances that the water coming out is safe, just like Vernon, just like Kelowna,” Chief Louis said. “We want to enjoy what other Canadians take for granted," Chief Jim Badger of Sucker Creek First Nation said.

The government has yet to file a defence to the Okanagan Band’s claim. In response to the earlier 2014 lawsuit, the government stated: “In answer to the claim as a whole, Canada denies it has any obligation or duty to the plaintiffs, as alleged or at all.” 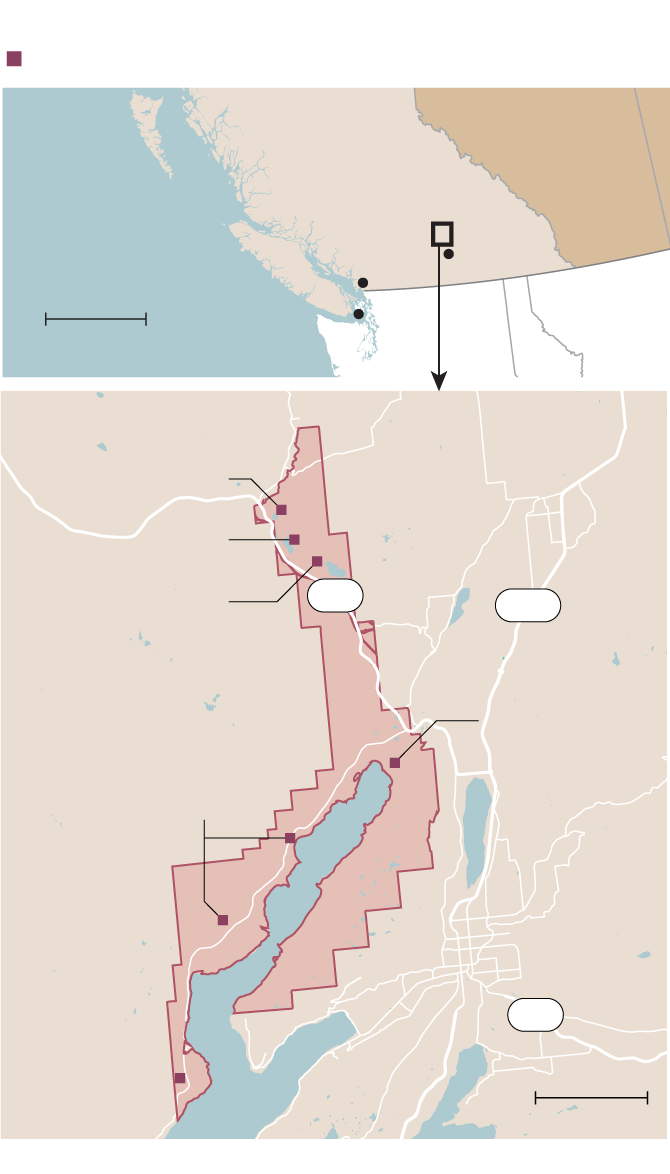 THE GLOBE AND MAIL, SOURCE: GOVERNMENT OF CANADA 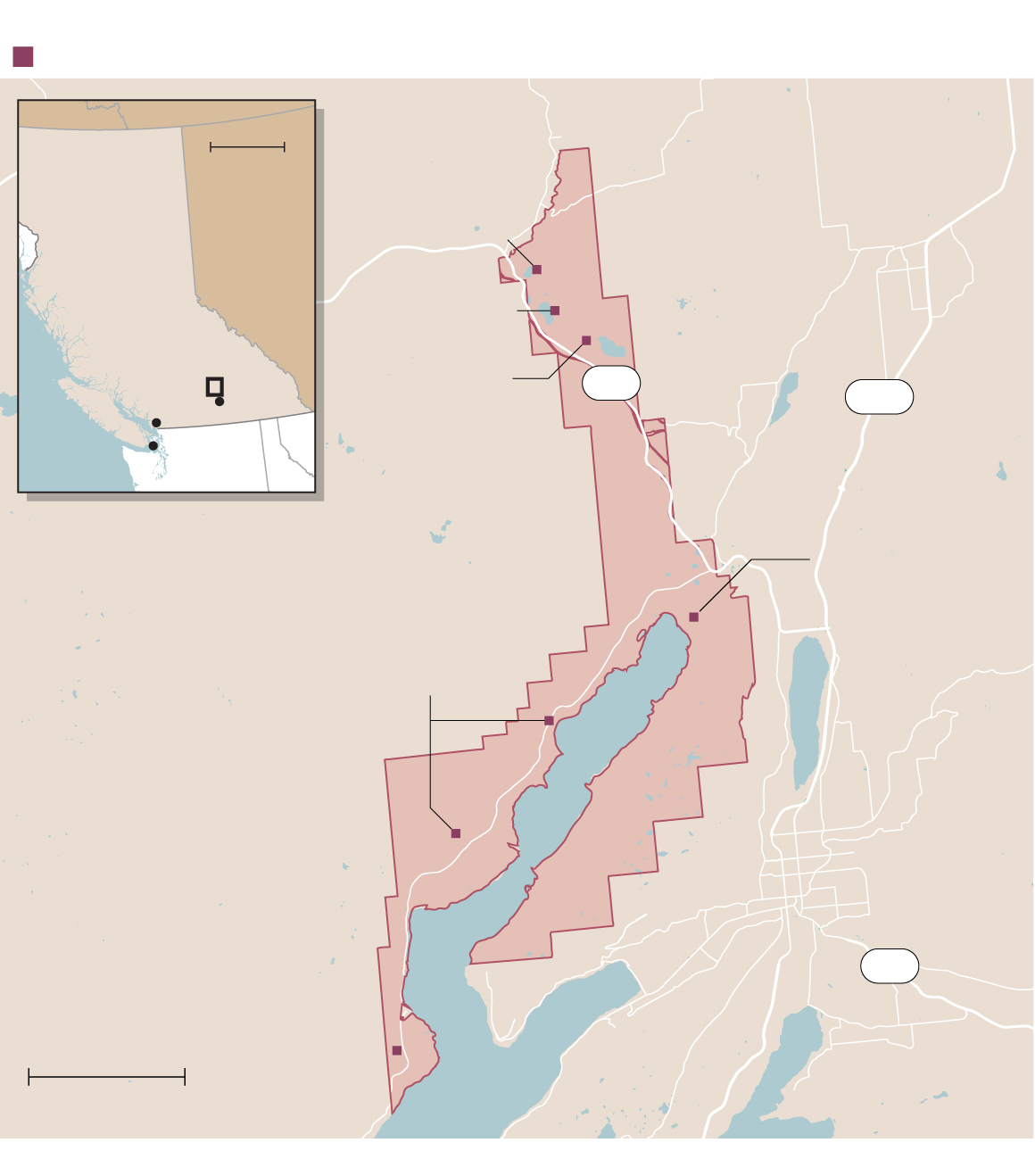 THE GLOBE AND MAIL, SOURCE: GOVERNMENT OF CANADA

The notion that First Nations deserve the same quality of water service as everybody else isn’t new. A federal cabinet decision in 1977 envisioned providing reserves with physical infrastructure “similar to that available in neighbouring, non-Indian communities or comparable locations." Given the small size and remoteness of many reserves, however, achieving equality would be expensive, particularly on a per-home basis.

That reality is evident on Okanagan No. 1. Much of the reserve is undeveloped, but there are several small clusters of homes dispersed across its lands, mostly along the shores of Okanagan Lake. Each small community is served by its own small centralized water system serving at most a few hundred homes.

When water consultant Bill Berzins toured those systems in May, he concluded the community’s wells were at risk of contamination. Above what is known as the Head of Lake system, for example, there were homes with septic systems. There’s also a nearby golf course, which Mr. Berzins suspected might be applying fertilizer. There were cattle and dairy farms upstream, and unusually high water demand suggested leaky pipes.

Moreover, the community’s water wasn’t being disinfected between the wells and residents’ taps. “In any small communities or, rural subdivision – in most communities in Canada – you would see some level of disinfection because it’s not costly to do,” Mr. Berzins said. “It requires the installation of a simple system.”

Disinfection isn’t optional in nearby Vernon or Kelowna. “If you take each one of Okanagan’s centralized systems and placed it off reserve, immediately adjacent to the reserve, they would all require chlorination under provincial law," said Clayton Leonard, the band’s lawyer – a contention confirmed in an interview with Interior Health, the provincial authority regulating drinking water in those non-Indigenous communities.

Federal records show the government has known since at least 2009 that Okanagan No. 1′s systems didn’t meet its own drinking-water guidelines. However, “systems that are not capable of providing safe drinking water would normally be subject to a drinking-water advisory,” the Indigenous Services department said, asserting there were no advisories in progress on Okanagan No. 1.

In fact, there have been several “do not consume” advisories in progress since May, owing to manganese levels above federal guidelines. The First Nations Health Authority (FNHA), which recommends advisories on First Nations lands in B.C. and tracks ones already in progress, does not include that advisory on its official list because it covers only pregnant or breastfeeding women and infants.

But that doesn’t mean the FNHA believes Okanagan No. 1′s water is safe. The band provided The Globe reports produced after FNHA inspections of Okanagan No. 1′s systems. Those documents revealed that since 2014 the FNHA has repeatedly warned the band of contamination and public-health risks, and has recommended installation of chlorination systems.

The federal government’s preoccupation with ending drinking-water advisories ultimately influenced what it did in Okanagan No. 1. Between 2012 and 2016, it provided $4.1-million to replace the one system that had been experiencing a lengthy advisory. The Bradley Creek and Six Mile water systems were joined to a new well, reservoir and water-treatment plant that included disinfection. The advisory was lifted in 2015, but many of the reserve’s other water-quality problems were not addressed.

Indigenous Services Canada asserts that bands are responsible for designing, constructing and operating their water infrastructure; the department confines its own role to providing funding and advice, in amounts that have never been clearly defined.

The Sucker Creek 150A reserve near High Prairie, Alta., faces different challenges. Roughly 80 per cent of residents draw their water from cisterns filled with water from the reserve’s treatment plant. Chief Badger said the reserve regularly experiences advisories and that he and many other locals buy bottled water. But it’s not on the federal government’s list of systems experiencing long-term advisories and Chief Badger said little has changed since the band filed its lawsuit in 2014.

“Whenever I look into my own cistern, at any given time I would find three or four mice floating inside,” he said. “I can go to Slave Lake and get a cup of water from the local hotel there and take a drink. I wouldn’t dare take a drink of the water here."