Nine-month-old Madeline is crawling around the laminate flooring, a little too close to the neatly trimmed hole cut in the floor for fishing. Her mom, Lesley, scoops her up and stands next to her husband, Chris, as the evening sun pours in. Their other child, Hunter, 2½, is outside playing.

The Dells’ ice hut on Lac Des Mille Lacs near Thunder Bay looks like a miniature family home, with cereal boxes on a shelf above the sink and toys tucked into nooks and crannies. The family spends their days ice fishing or exploring the frozen lake by snowmobile, their nights sleeping in their vinyl-clad hut made of studded walls and warmed by a small wood stove.

“Maybe COVID had something to do with slowing the world down and doing more family stuff, instead of the hard grind of what we used to do,” reflects Chris Dell, who works as a mechanical contractor in Thunder Bay.

Every winter Lac Des Mille Lacs, two hours west of Thunder Bay, transforms into an ice hut village nestled among a maze of islands and deep bays. But this winter has been busier than ever as the COVID-19 pandemic forced people to stay close to home and connect with their local natural wonders.

Lac Des Mille Lacs is the largest ice hut community in Northern Ontario. Ken Wing is the groundskeeper of Shacks Landing, a large clearing at the lake’s northeastern corner where ice huts are stored for the summer. He figures more than 150 shacks are on the lake, which visitors reach by a 12-kilometre winter road that he helps maintain.

Before ice hut culture took off here, anglers used to head onto lakes equipped with tarps, sticks and a small pail for a fire. It was a simple solution to block the wind, stay warm and try for a feed of fish to bring home to their family. Archie Hoogsteen changed that.

A bricklayer laid off in the winters, Mr. Hoogsteen wanted to spend his days on the lake with his young children while his wife, Corinne, worked at a bank in Kakabeka Falls, outside of Thunder Bay. So he built a small ice hut out of prefabricated wooden walls nearly 40 years ago, skidded it onto the lake, and before long someone wanted to rent it. That’s how his business, Sugar Shack Rentals, was born. He now has a cluster of eight red huts, renting for a weekend at prices similar to an average hotel room.

Mr. Hoogsteen, 66, feels a sense of pride when he drives through the village and sees hundreds of people out enjoying their local beauty during the pandemic. Despite this being his best season ever for rentals, Mr. Hoogsteen has listed Sugar Shack for sale because he wants to spend more time with his seven grandchildren.

Handling the dynamic complexities of an industry built on ice hasn’t always been easy. He recalls years where sudden thaws would lead to trucks and shacks being stranded on the lake or vehicles that went through the ice and had to be pulled out.

For now, though, the spring thaw is still weeks away.

Sitting in a luxurious red leather barber chair with Smokey, the neighbour’s cat who visits on occasion, Carolean Marshall looks as if she’s at home, not out on a frozen lake. In the corner of her hut, a wood stove crackles and piping hot brownies sit atop the range. The bedroom, equipped with bunk beds and a queen-sized mattress, has snowshoes hanging on the wall. Smokey jumps on the bunk and sprawls out. “This is winter camping, we’re not roughing it out here,” laughs Ms. Marshall.

She and her partner, Jeff, work jobs affected differently by the pandemic. He is a heavy-machine salesman; she owns a small hairdressing salon in Thunder Bay. Mr. Marshall, whose business has gone largely unaffected owing to booming logging and gold industries, points out that Ms. Marshall’s salon has been shut down half the year.

While the two have been coming to Lac Des Mille Lacs for seven winters with a smaller hut, this is their first winter with an overnight hut, and they feel it’s been the perfect year to spend so much time on the lake to escape the city. Their getaway, dubbed the Marshall Lounge, is the place they’ve been happiest all winter. Since the COVID-19 pandemic, Mr. Marshall feels that “people are reconnecting with nature, they’re reconnecting with the basics of life, with what’s important and what’s not.”

Others are newcomers. Dave Lorenston decided this would be the year he and his friend, Neil Sproule, would buy an ice shack and bring it on the lake. The two have been alternating nights with their families at the hut every weekend all season so they aren’t staying together, abiding by pandemic rules.

As the two watch the sunset glow, the lake silhouetted with ice huts, Mr. Lorenston drops his beer when his rod almost goes down the fishing hole. Minutes later, he’s posing for Mr. Sproule’s camera with the biggest walleye he’s ever caught. It’s this action that has kept the ice-fishing culture alive, the thrill of the bite, and walleye, colloquially known as pickerel, are the target species. While not everyone will wet a line, most people will leave with a stringer of the desired fish, which make excellent table fare.

In a year marked by uncertain times, drops in employment and an identity crisis for those with the lust to wander the globe, the lure of Lac Des Mille Lacs beats stronger than ever. 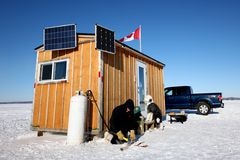 In photos: Father-daughter ice fishing on the Bay of Quinte a cherished tradition
February 14, 2021 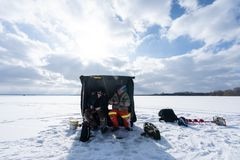