The nightmares have stopped for Aymen Derbali. He no longer hears the screams of his friends falling to a shooter’s bullets. Instead, Mr. Derbali now has a recurring dream.

“In my dream, I can walk,” he says from his wheelchair. “I don’t remember the dream, but in it, I am the way I was before.”

Mr. Derbali sits in the January light of his spacious bungalow, purchased through the kindness of 4,800 strangers. His wife and three children surround him. He can watch soccer on TV with his older son and uses his pinky finger to type messages on his iPhone.

Walking again may just be a dream: bullet fragments lodged in his spinal cord mean his legs remain paralyzed. But the fact Mr. Derbali has made it this far, with the help of so many, is a small symbol of triumph over the violence inflicted by a gunman at the Islamic Cultural Centre in Quebec City. Two years after the attack that left six Muslim men dead, Mr. Derbali has returned to family life in a new home and a broken, but healing, body.

“Sometimes I have to fight the sorrow I feel, but I compare my situation to how I was in hospital and it comforts me,” he says. “I came out of a coma and I couldn’t eat or drink. I couldn’t speak. I’ve come a long way.”

Two milestones now approach: the anniversary of the Jan. 29 attack, followed by the sentencing of shooter Alexandre Bissonnette 10 days later. Mr. Derbali, 42, knows he might not have survived to witness them.

On that frigid night in 2017, he was carried out of the mosque and into an ambulance with seven bullets in his body and such a massive amount of blood loss that his family prepared for the worst. “I said that for sure, my father is dead,” his now 10-year-old son, Ayoub, recalls. “I was sad.”

Doctors put him into an artificial coma. At one point, they told his wife she could consider taking him off life support, she says.

“They said there was no hope,” Nedra Zahouani says. “A bullet has exploded in his spine. They said he wouldn’t be able to move his four limbs, and it would be hard to live at home, or even in the hospital.”

She refused. She vowed to her husband she would remain by his side, even as he lay in a coma. “You’ll stay with us and as long as you go down this road, I’ll be with you,” she told him. “Even if you never come to live at home with us, I’ll always stay with you. I’ll take you as you are.”

Seven days later, her husband moved his hand, a flutter that became a miracle in her eyes.

He woke up after two months and only then discovered the massacre’s horrific toll. In all, he spent six months in hospital and another year in a rehabilitation centre, fighting to regain some control over his wounded body. Medical staff said he couldn’t return to the family’s fourth-floor apartment because it wasn’t adapted for his wheelchair: The family would need a new home.

His story prompted a Toronto group, DawaNet, to launch a fundraising campaign that collected more than $400,000. Last August, a year and a half after he fell to the mosque floor and prepared to die, Mr. Derbali rolled his wheelchair into the family’s newly bought home in the Quebec City suburb of Sainte-Foy. Its rooms and doorways are wide enough to accommodate his motorized wheelchair, which he can propel by moving the joystick with his nerve-damaged right hand.

His days bring new rewards. For months, he feared he would never be able to hold his children again. Now, the couple’s two younger children – two-year-old Maryem and six-year-old Youssouf – clamber onto his lap. With fragile hands, he lightly strokes their hair.

He is grateful to those who made contributions from the four corners of the world. Donations came from across Quebec and Canada and as far away as Ireland, Germany and Kuwait.

“People of all religions gave – Jews, Christians, Buddhists,” Mr. Derbali says. “It proves that deep down, most people want good, and evil is marginal. A lot of people have good hearts.”

Mr. Derbali was a forceful presence during Mr. Bissonnette’s trial at the Quebec City courthouse last year, an embodiment of the mosque tragedy and the human cost of hatred. After Mr. Derbali testified from his wheelchair at Mr. Bissonnette’s sentencing hearing, Superior Court Justice François Huot praised him for his “incredible demonstration of courage” during the shooting. Mr. Derbali had deliberately stood in the line of fire to try to distract the gunman, saying he preferred to be paralyzed for life than to flee.

Now, Mr. Derbali is eager for the court case to close, ending what prosecutor Thomas Jacques called one of the worst hate crimes in Canadian legal history. Mr. Bissonnette pleaded guilty to six counts of first-degree murder and is awaiting a sentence that could reach an unprecedented 150 years in jail.

“We’re eager to move on so we can stop talking about it,” Mr. Derbali says.

An IT specialist with two master’s degrees from Laval University, Mr. Derbali has had some job offers and hopes to return to work part-time. He would also welcome the chance to speak to students about the dangers of extremism. He worries about the presence of far-right groups in Quebec City, even if he knows they are marginal.

Statistics Canada reported that hate crimes against Muslims nearly tripled in Quebec in 2017, peaking the month after the mosque shooting. Mr. Derbali says he’s troubled by anti-Muslim invectives spread through social media. Yet he insists he will not leave Quebec City, the place he came to from Tunisia 18 years ago.

“We’re talking about a very small minority,” he says. “The proof is that I didn’t think of moving.”

Mostly, Mr. Derbali wants to continue to bear witness. He wants to speak for the six men who have been silenced. On the 29th, he will return to the mosque in a personal act of defiance. He’ll see the reminder of his own brush with death: A square of carpeting has been removed from the mosque prayer space and replaced. The carpet was thoroughly cleaned after the massacre, but some stubborn spots wouldn’t come out. One of them was the stain of Mr. Derbali’s blood.

“I want to send a message to the extremists on the right: We’re not worried about returning where we were killed and injured. I’m returning to say that maybe [the shooter] succeeded in injuring me, but he didn’t succeed in weakening my faith,” he says.

The visit will also be a marker on his path to recovery. “I’m returning to the mosque to say that, mentally, I’m getting over it,” he says. “It’s not causing me nightmares any more.”

Opinion
The pick-and-choose problem with the U.K.’s efforts to protect persecuted Christians
December 31, 2018 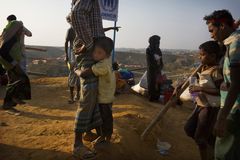 Opinion
To right-wingers,the Global Compact for Migration motion is a sign the sky is falling again
December 5, 2018 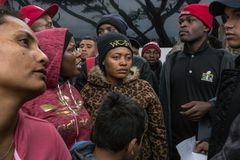 Opinion
The culture war has been won, so now we fight about words
November 9, 2018 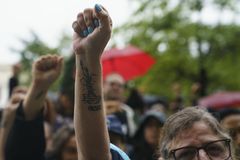