An Oshawa judge is left to decide the fates of an off-duty Toronto police officer and his brother, who are accused of assaulting a young black man.

Crown prosecutors and defence lawyers made their closing arguments Wednesday to Ontario Superior Court Justice Joseph Di Luca in the high-profile, judge-only trial of Michael Theriault and Christian Theriault. The brothers are jointly charged with aggravated assault against Dafonte Miller, who was beaten so severely in December, 2016, he lost an eye. They are also separately charged with obstruction of justice for misleading investigators.

Justice Di Luca is expected to release his judgment April 9.

The case hinges on whose account of the altercation is more credible: Mr. Miller’s or Michael Theriault’s.

Mr. Miller told court he was walking with friends in a residential Whitby neighbourhood when he encountered the Theriault brothers, who demanded to know where they lived and what they were doing. Then, unprompted, they chased him and proceeded to punch, kick and beat him with a metal pipe, he said.

Michael Theriault, meanwhile, testified that he and his brother caught Mr. Miller and a friend attempting to break into their father’s truck and chased him. He claims Mr. Miller struck them with a pipe and they hit him in self-defence while trying to disarm him.

During the two-week trial, which started in late October, 2019, evidence was also given by Durham Regional Police officers who attended the scene, a homeowner who witnessed part of the altercation and called 911 and two men Mr. Miller was with on the night in question, among others.

When police responded to the scene that morning, an officer arrested Mr. Miller for allegedly breaking into the Theriaults’ father’s vehicle and allowed Michael Theriault, who was holding down Mr. Miller at the time on the driveway, to handcuff Mr. Miller. After a bloodied Mr. Miller was taken to hospital, the Theriaults were questioned about what happened.

But a few months later, all charges against Mr. Miller were dropped and the Theriault brothers were charged.

In his closing arguments, defence lawyer Michael Lacy repeatedly characterized Mr. Miller as "a perjurer.” He pointed to inconsistencies in what Mr. Miller told investigators, what he testified during the preliminary hearing and then what he said from the witness box in November. He also pointed out that other Crown witnesses – in particular, one of the men who was with Mr. Miller the night of the altercation – presented evidence that supported Michael Theriault’s story: that Mr. Miller and his friends were entering unlocked vehicles that evening to steal valuables.

“[Mr. Miller] is a young man who has lost touch with the reality of what happened. Maybe he even believes what he’s saying. None of it is true, though,” Mr. Lacy told the court.

In the Crown’s closing arguments, prosecutor Linda Shin argued that it didn’t matter whether the judge believed the reason Mr. Miller was on the street that night – there was independent evidence that backed up Mr. Miller’s account.

The front door of a house where Mr. Miller sought help in the midst of his beating was stained with blood, as was the ground in front of it where he stood, which Ms. Shin said is evidence of Mr. Miller being struck in the face with the pipe, which caused the injury to his eye. The fact that neither of the Theriaults had Mr. Miller’s blood on them suggests the bloody injuries Mr. Miller received were not caused by the Theriaults’ hands alone, she told court.

The defence said only a blood-spatter expert could draw such conclusions, and the Crown did not call one to testify.

“We ask that you accept evidence after the chase began, which is all supported by independent evidence,” Ms. Shin said. “A retreating Dafonte Miller was the victim of a vicious, two-on-one assault by Michael and Christian Theriault that left him with life-altering injuries.”

The case has garnered national attention and has sparked discussions about violent confrontations between police and black people. Mr. Lacy acknowledged the scrutiny Justice Di Luca will face when he makes his judgment.

“The community is not entitled to a particular verdict,” he said. “They are entitled, just like these defendants, to have your honour objectively review the evidence … holding the Crown to the strict burden of proof, always mindful of the presumption of innocence." 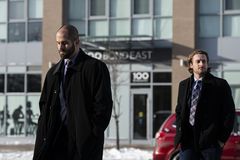 Dafonte Miller tells court of pipe assault allegedly carried out by off-duty Toronto police officer and brother that made his eye 'burst’
November 7, 2019 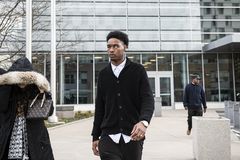