A prosecutor’s use of LinkedIn to conduct background checks on jurors is raising new questions about improper vetting after a second jury in a week was dismissed in Atlantic Canada over the issue.

Both cases – a murder trial, and one of criminal negligence causing death – are now being tried by judge alone after the prosecution was obliged to drop its earlier objection to defence requests for such a trial.

The newest instance came on Thursday in an important case in Nova Scotia – the first in that province under a federal Criminal Code provision drafted after the 1992 Westray methane explosion that killed 26 miners in Plymouth, N.S. Elie Hoyeck, the owner of an auto-repair shop, is charged with criminal negligence causing the death of an employee, Peter Kempton, in a 2013 vehicle fire. The 2004 “Westray law” says that anyone who directs another person in a task must take reasonable steps to ensure the person’s safety.

The earlier instance was revealed in a ruling on Monday in a high-profile case in New Brunswick – the retrial of Dennis Oland, charged with second-degree murder of his wealthy father, Richard. He had been found guilty in 2015, but an appeal court set aside the conviction and ordered a new trial in 2016. A police officer conducted checks in a local police database with information on all police contacts (as a witness, complainant, or suspect), and did not share the information with Mr. Oland’s defence team. A judge dismissed the jury and declared a mistrial; a new trial started Tuesday.

Vancouver lawyer Eric Gottardi, the past chair of the Canadian Bar Association’s criminal-justice section, said that even one or two such cases are concerning.

“You have to think it’s like the tip of an iceberg just because of how unlikely it is that these practices would come to light,” he said in an interview.

It is not a new area of law, and the message is clear to police and prosecutors about what they may and may not do. In 2012, the Supreme Court of Canada ruled that prosecutors and police must share with defence lawyers anything they find inadvertently when checking whether potential jurors have criminal records. It made a similar ruling in 1997. The idea is that the prosecution should not have an advantage over the defence, or interfere with jurors’ privacy.

Today, state authorities have easier access to information on social media than when the Supreme Court made those rulings.

“We’ve become so used to having all information at our fingertips that Crowns or police might end up doing this without even thinking about it,” Stephen Coughlan, who teaches criminal law at Schulich Law School in Halifax, said in an e-mail.

In fact, Nova Scotia prosecutor Alex Keaveny told Justice James Chipman in the Nova Scotia Supreme Court on Thursday that his actions had been inadvertent. He said that some jurors had not fully filled out their information forms, and so he went on LinkedIn – which sent notifications to the jurors he checked. One juror sent a note to the judge asking about the appropriateness of the checks.

Justice Chipman ruled that the appearance of fairness had been compromised, much as Justice Terrence Morrison of the New Brunswick Court of Queen’s Bench found in the Oland case. 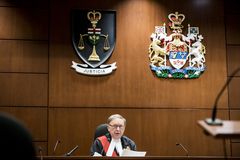