Lawyer Raymond Doray argued against a 2018 Quebec Superior Court decision authorizing the lawsuit on allegations of harassment and sexual misconduct.

Mr. Rozon denies the allegations by a group of women calling themselves “Les Courageuses,” which date between 1982 and 2016.

The accusations have not been tested by the courts.

In the Quebec Court of Appeal on Thursday, Mr. Doray argued that Superior Court Justice Donald Bisson was attempting to facilitate the denouncing of sexual assaults – a “commendable” goal but one that he said doesn’t fall within the criteria for a class action.

Mr. Doray argued that while the class action was born in the wake of the #MeToo movement, the fact it’s a “collective movement” doesn’t justify a “collective action.”

He argued that there were other avenues for lawsuits against Mr. Rozon, but a class action wasn’t one of them.

Mr. Doray said there’s no common link between the allegations, nor the women bringing them.

That means there is no way to look at them as a group and each case will have to be analyzed separately, and each woman will have to testify to her particular situation and lack of consent before a judge can conclude whether there is fault or not, he said.

Actress Patricia Tulasne, who represents the group, is the only one publicly identified. The other women’s identities are protected by a publication ban.

“Where is the error?” he asked the high court on Thursday.

“There are few areas where class action are as useful,” Mr. Johnston said of sexual assault. “It’s often the difference between recourse and … no recourse.”

The Court of Appeal will rule at a later date. 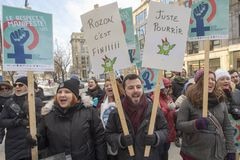