You have to wonder about the merits of a business deal that gives your competitor an unexpected windfall. That’s what happened in Montreal this week, as the sale of Gilbert Rozon’s majority share in the Just For Laughs (JFL) comedy empire drove a major sponsor of its bilingual Montreal festival into the arms of its newborn rival, the Grand Montréal Comédie Fest (GMCF).

Rozon’s stake in the Just for Laughs Group was bought for an undisclosed sum by a group of U.S.-based investors that includes ICM Partners and Canadian-born comedian Howie Mandel. One of the deal’s hidden costs was a messy divorce from media conglomerate Quebecor, which gave $45-million in sponsorships to the JFL festival during the past five years, and which broadcast JFL shows through its TVA network.

No more. On Monday, a couple of days before the expected sale of Rozon’s stake to the American group was confirmed, the break-away comics who launched GMCF last November revealed that Quebecor’s Vidéotron division had moved to their corner as a founding partner. The defection would “prove the seriousness of what we’re doing and speed up our operations,” the festival said in a statement.

Everything about the way the JFL sale was conducted was offensive to Quebecor, which believed it had contractual rights of first refusal that Rozon and his agents didn’t honour. It pursued its presumed right in Quebec Superior Court, where lawyers for Rozon’s side accused the company of acting in bad faith in an effort to try to grab JFL for cheap.

As in personal relationships where one quarrel often leads to another, Quebecor also sued Just for Laughs Group for $1.1-million for various services. TVA abruptly broke off negotiations to extend its broadcast agreement with the comedy festival.

The court eventually affirmed a limited first-refusal right for Quebecor, to buy Rozon’s stake for whatever price another suitor was willing to offer. Quebecor declined that opportunity a week ago, making the sale to the Americans inevitable.

JFL’s new majority owners say they will preserve the not-for-profit festival and the company’s base in Montreal. Their arrival also removes barriers put up after Rozon was forced to sell following allegations of sexual impropriety, which he has denied and have not been proven in court. Quebec’s Minister of Tourism, for example, said that the 2018 festival’s $1.5-million tourism grant, which had been suspended while Rozon was “in the picture,” could now go ahead.

The new owners bought a controlling share in Just for Laughs Group’s profitable enterprises – mainly in TV production and distribution, and live-performance production. Just for Laughs Group runs the Montreal festival, but as a not-for-profit entity reliant on government grants, that part of the operation is no more saleable than, say, the Stratford Festival.

ICM Partners is a talent and literary agency, which represents comedians such as Chris Rock, Ellen DeGeneres and Mandel. It surely understands the value of a festival that is also a showcase for young comedians, and which has a synergistic relationship with JFL’s profitable enterprises. But ICM doesn’t represent any francophone comedians and doesn’t run any other not-for-profit festivals. It may eventually wonder why it needs to run this one.

It could spin off the festival at a later date. Several commentators in Montreal were sighing this week about the loss to American investors of another pillar of Quebec’s entertainment industry (after Cirque du Soleil in 2015). The presentation of “le Torontois” Mandel as the face of the deal didn’t do much to soften the blow. Repatriation of the festival as a stand-alone, all-Quebec entity could play well in this town.

At the moment, however, the smaller GMCF may have gained a more solid claim to be the home team. Its founders are 50 francophone comedians. It is being run as a local co-operative, not as an arm of a branch of a larger foreign company. Whether or not it can wrangle grants for its inaugural year, its founding was warmly received by francophone leaders at all levels of government. And it now has the strong backing of Vidéotron, whose ultimate boss is Pierre Karl Péladeau, a man not known to be shy about taking the fight to his opponents.

Whether or not things could have been handled differently, JFL Group should already be ruing the day relations began to sour between its now-former owner and Péladeau’s Quebecor media empire, which includes newpapers such as Le Journal de Montréal. Rozon could have made any number of parting gifts to the festival he founded in 1983 and to the money-spinning businesses he built around it. Making a powerful enemy for the JFL comedy fest should not have been one of them.

Just For Laughs sold to group including Howie Mandel
March 21, 2018 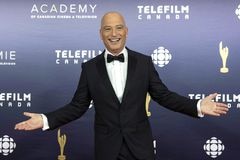 Quebecor will not meet competitor’s bid in Just For Laughs sale
March 15, 2018
Just for Laughs to be sold after reaching deal with group of investors
March 3, 2018
Follow Robert Everett-Green on Twitter @RobertEG_
Report an error Editorial code of conduct
Due to technical reasons, we have temporarily removed commenting from our articles. We hope to have this fixed soon. Thank you for your patience. If you are looking to give feedback on our new site, please send it along to feedback@globeandmail.com. If you want to write a letter to the editor, please forward to letters@globeandmail.com.
Comments are closed