Thirty years after the proposed expansion of a golf course sparked a 78-day standoff between Quebec Mohawks and Canadian soldiers, the land claims at the heart of the Oka crisis remain unresolved, Indigenous leaders and elders say.

Serge Simon, the current Grand Chief of Kanesatake, vividly remembers the events of July 11, 1990, when Quebec provincial police moved in on a barricade erected by Mohawks who were protesting the planned development of what they claim as ancestral land in Oka, about 50 kilometres northwest of Montreal.

“I saw the tactical squad come out of their vehicles and start following this cube van up the hill and I thought, ‘Oh no, they’re going to kill everybody,”’ Simon recalled in an interview this week.

“All of a sudden you just heard a popping sound and it just went crazy,” he said. “You just heard automatic gunfire coming from both sides, that was the beginning.”

Cpl. Marcel Lemay died in the gunfire, felled by a bullet whose source was never determined.

The army sent in some 800 soldiers, encircling the community with barbed wire and sparking months of negotiations that culminated in a deal: the barricades of dirt and mangled police vehicles were to come down in return for the cancellation of the golf course expansion.

The conflict inspired Indigenous movements across the country and led to the Royal Commission of Aboriginal Peoples, which helped usher in a greater awareness of the need to settle land claims.

But three decades later, the underlying land disputes at the heart of the crisis remain unresolved, and the Kanesatake community is deeply divided on how to move forward.

“It’s gotten worse since 1990, 30 years ago,” said Walter David, an elder in the community. He says Kanesatake has continued to lose land to developers who have cut down trees and started housing projects on disputed territory.

“There’s been a lot of secrecy about what’s been going on, lots of money thrown at band council for these negotiations from the federal government, and just no results back to the people.”

David says the events of 1990 are “blotchy” in his mind, likely due to the post-traumatic stress he’s suffered. But he says the event remains an example of police violence, and the extent to which governments will go to refuse talking about land.

“We wanted to disrupt the expansion of the golf, and do it peacefully, and it was peaceful,” he maintained. “Up until we got assaulted twice,” he said, referring to police raids and alleged attacks by non-Indigenous citizens.

David says the aggressive law enforcement response to Indigenous pipeline protests in North Dakota and British Columbia bring back painful memories, and show that police attitudes have yet to change.

Watching conflicts between Black Lives Matters demonstrators and police triggered by the death of George Floyd at the hands of Minneapolis police has once again “set off little triggers” inside him, he said.

David and Simon were on the same side of the Oka events, and both express similar concerns over issues in the community and a desire to reclaim disputed land. But they stand at opposite sides of a divide that has pitted elected band councils against Mohawk traditionalists and the Longhouse, who are fiercely critical of the process underway and of Simon’s leadership.

David says Simon has carried out land negotiations with the federal government behind closed doors and has not been transparent with the community on this or many other matters.

“Band councils are funded by the federal government, so there’s kind of a conflict of interest for them to be funded for their own negotiations,” he said.

Recently, members of the community sent a 16-page document of questions to Simon, demanding answers to everything from the status of negotiations to band council expenditures.

Simon, on the other hand, says that while he is bound by nondisclosure agreements when it comes to land negotiations, he has tried to keep the community informed.

He also fiercely resents being branded a “sellout” or an arm of the federal government for trying to negotiate a peaceful repatriation of the land.

The divide became clearer last year when a local developer offered to donate 60 hectares of the land to Kanesatake as an “ecological gift” and said he was prepared to discuss the sale of an additional 150 hectares he owns in Oka to the federal government to transfer to the Mohawk community.

While Simon believes the offer would serve the community by protecting Mohawk land from development, David and members of the traditional Longhouse government balk at the idea that the land would come with strings attached, including limits on its use.

The issue, which is still being examined by lawyers, also renewed tensions with Oka’s mayor, who raised concerns that becoming encircled by Kanesatake could lead to declining property values, illegal garbage dumping and an expansion of cannabis and cigarette merchants.

While by some measures things have improved in the community since 1990, Simon says many problems remain, including illegal dumping on environmentally sensitive lands, the lack of an Indigenous police force to bring stability and the need for better jobs and housing.

While he tries to remain positive, he admits his optimism is “pretty shaky these days” in the face of resistance from his own community, Oka’s mayor and other actors, including a federal government that “has to be brought kicking and screaming” to recognize aboriginal title, he said.

At age 70, David says he’s tired of fighting. He stopped attending 1990 commemorative events long ago, preferring to focus on his garden and his coffee-roasting business.

He feels that if there’s hope, it’s in the young people there, who he says are beginning to do “great things” for the community and the land.

“We are going to be there, watch them and help them and get them going, be there for them as a support mechanism, and then turn the key over to them and say, ‘It’s yours,”’ he said. 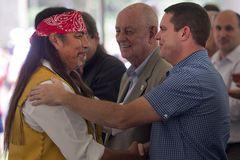 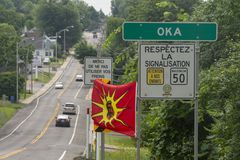