Indigenous Services Canada Minister Marc Miller said his department is aware of 232 active cases in Kashechewan and that a majority of those cases are among children under 12, those who aren’t yet eligible for the vaccine, and children 18 and under who have had either a first dose or none.

At a COVID-19 update Wednesday morning, Mr. Miller called the outbreak in Kashechewan an “increasingly alarming situation,” with its case count making up ¼ of all 889 active cases in First Nations across the country.

The Minister said ISC continues to work with Chief Leo Friday and other partners to provide the necessary supports, including four three-bedroom isolation units.

A COVID-19 outbreak has infected 138 children in Kashechewan, a remote First Nation along the James Bay coast, prompting calls for emergency shelters to facilitate isolation in the community, which has long suffered severe housing challenges.

Among those who have tested positive are two infants, one seven weeks old and another four months old. About 65 per cent of the community’s active infections are among children under 17.

How many coronavirus cases are there in Canada, by province, and worldwide?

Chief Friday said about 74 per cent of adults in the community are fully vaccinated, having received doses in February and March as part of Operation Remote Immunity, which held vaccination clinics in 31 remote First Nations in Northern Ontario. But, he said, the 26 per cent of adults who haven’t been vaccinated, as well as those under 17 who were ineligible for vaccination, are now getting infected.

Kashechewan has endured decades of annual evacuations because of the risk of flooding from the nearby Albany River each spring. Chief Friday said overcrowding is a challenge, and that 300 new permanent homes are required to accommodate the community’s needs.

He added that some Kashechewan residents live in households with up to 20 people, making isolation nearly impossible. He condemned the federal government for its inaction, saying he believes building emergency isolation shelters as soon as possible is critical.

“We need to move with the plan quickly,” he said. “There is a complete lockdown since Saturday and it seems that it’s getting worse.”

“Everybody is now scared that they will have [COVID-19].”

Contractors were in the community Monday working on the foundations for new isolation units, which will consist of six to eight dome structures. But Chief Friday called this another band-aid solution from governments that haven’t addressed Kashechewan’s long-term housing needs. Addressing those needs, he said, could have prevented this outbreak.

According to a statement from Indigenous Services Canada on Sunday, the agency has spent $8-million to date on pandemic relief in Kashechewan, including $453,000 from the Indigenous Community Support Fund.

Chief Friday said the community used pandemic grants to run a program that worked well to protect them at the beginning of the pandemic. They used the money to secure resources to co-ordinate travel restrictions, build isolation accommodations and ramp up security, but they eventually ran out of funds. 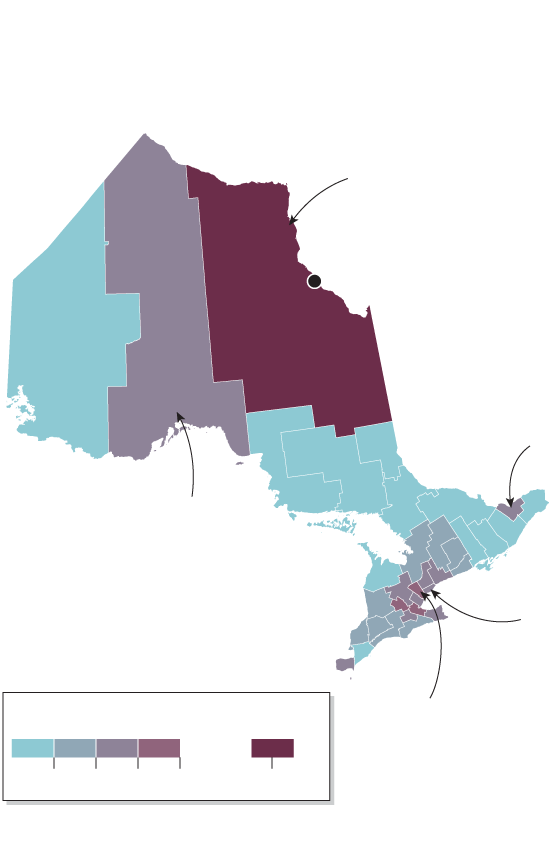 the past 14 days, by public health unit 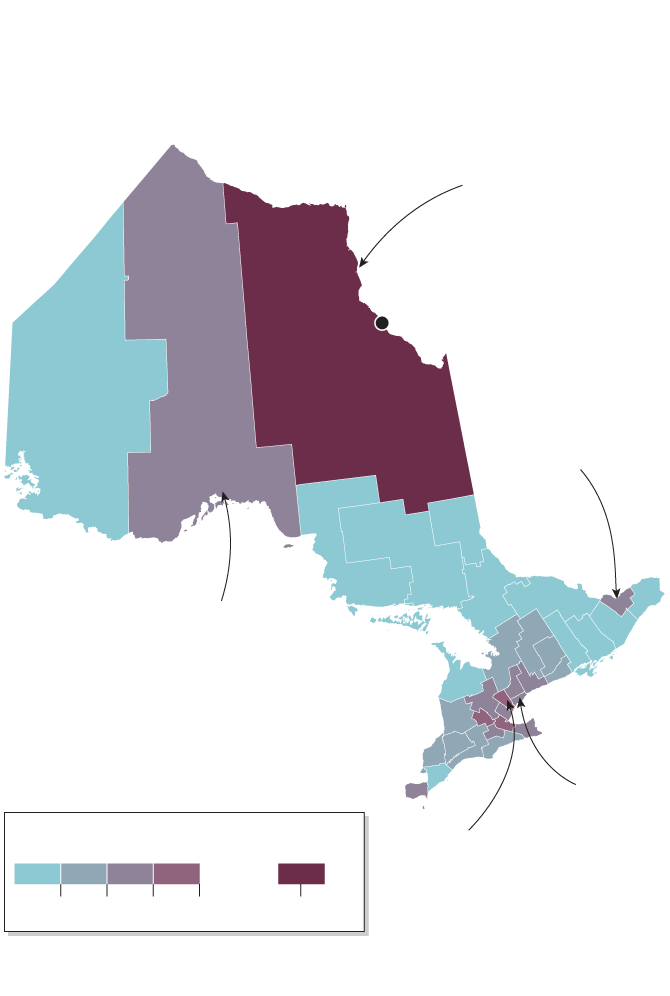 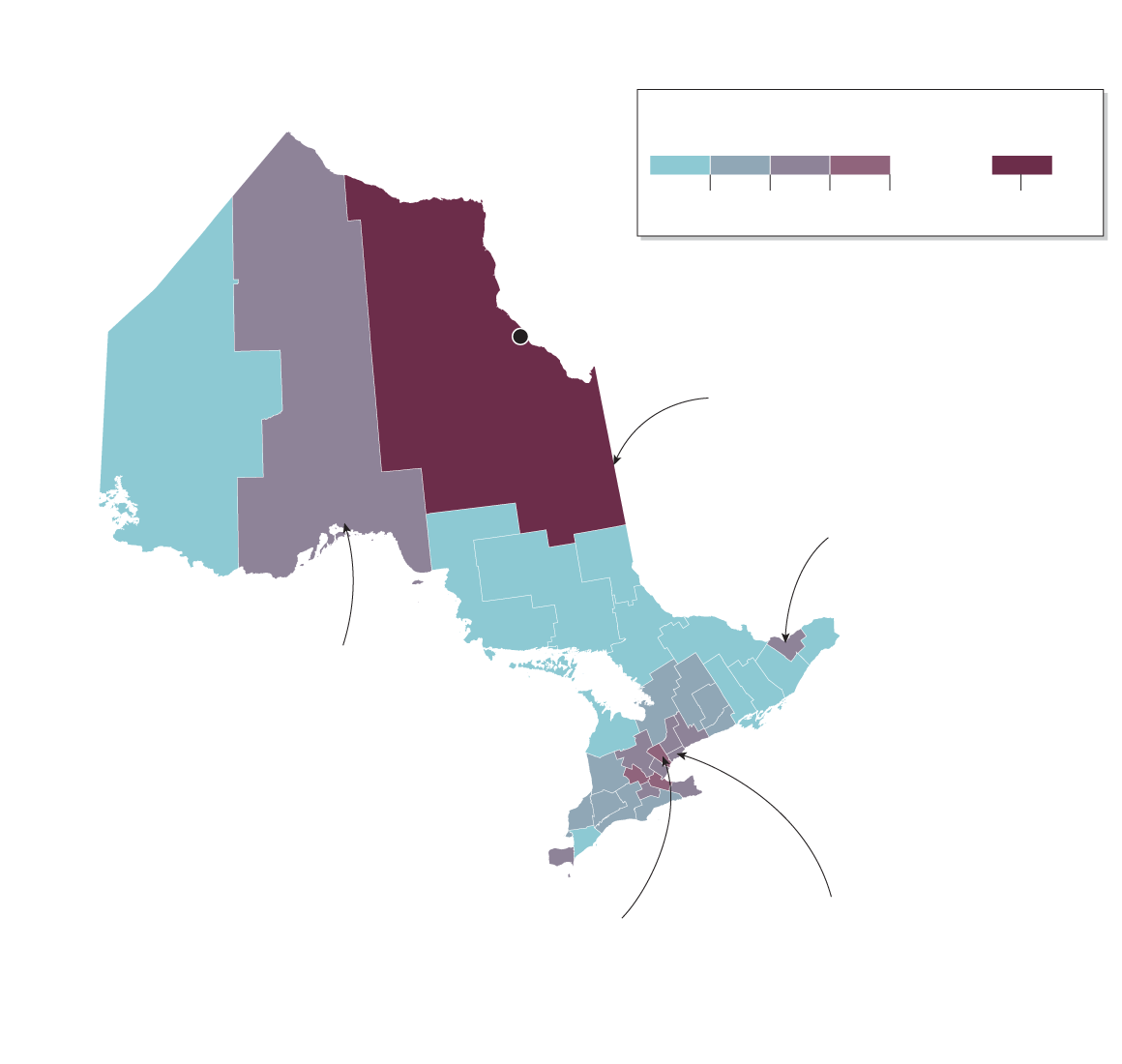 COVID-19 case rates for the past 14 days, by public health unit

Ontario Health Minister Christine Elliott told reporters that government assistance is ongoing. “We are making sure that we get the resources that we need either to treat them on site, or if they need hospitalization to make sure that they can get into hospitalization,” she said.

Kashechewan is one of six communities served by the Weeneebayko Area Health Authority (WAHA), which has been assisting with COVID-19 case management. On Monday, WAHA reported a total of 262 active cases in the six communities, including Kashechewan, which accounts for over 80 per cent of the total.

In a previous interview with the Globe and Mail, Lynne Innes, the president and CEO of WAHA, said patients were being flown almost 1,000 kilometres south to a Kingston hospital as part of an agreement to provide COVID-19 care and treatment there.

Chief Friday said there were at least six community members in hospital in Kingston, including a 12-year-old. A couple of the nation’s members, he said, are in the intensive care unit.

In a media call Tuesday, Porcupine Health Unit Medical Officer of Health Lianne Catton, whose jurisdiction includes Kashechewan, said the region is seeing higher infection rates in younger individuals and a decrease in cases among older people. It’s not a surprising pattern, she said, since local vaccination rates are around 95 per cent for people over the age of 75.

Dr. Catton said lab testing has confirmed 12 cases of the more-infectious Delta variant in the Porcupine area, which she said explains the dramatic spread the Northern Ontario region is seeing in this third wave of the pandemic.

She added that this is an opportunity to move forward with vaccination efforts, and that there have to be sustained increases in vaccination rates, particularly among people under 30, before the region can consider reopening.

Ms. Elliott said the government is working with First Nations leaders on the second phase of Operation Remote Immunity, which is led by the Ornge air and land ambulance service.

Operation Remote Immunity 2.0 launched on May 31. The program’s objective is to vaccinate about 6,000 youths aged 12 to 17 in 31 Ontario fly-in First Nations communities and Moosonee. The vaccine program initially administered over 25,000 doses to adults in February and March.

Premier Doug Ford on Tuesday said most people who had received their initial vaccine doses as part of Operation Remote Immunity have now also received second doses, and the service is returning to vaccinate youth and anyone else who might have been missed.

“We’re going to be up there, we’re going to support them any way we can,” he said during an announcement about funding for investigating residential school burial sites.

Chief Friday said community members have been hired to help Canadian Rangers and the Canadian Red Cross, who are on the ground helping deliver food to households.

Indigenous Services Canada said in a statement last weekend that in addition to the 15 Canadian Rangers, six additional nurses and two physicians are in the community.

Editor’s note: An earlier version of this story featured an incorrect image identifying Chief Leo Friday. This version has been corrected.