After spending her adult life in anonymity, Kay MacBeth’s final months included a dizzying array of honours. She was portrayed in a Heritage Minute, feted at a Toronto Raptors basketball game and inducted into Canada’s Sports Hall of Fame.

She was the last living member of the legendary Edmonton Grads, a squad that in the opinion of Canadian-born James Naismith, who invented the sport, was “the finest basketball team that ever stepped out on a floor.”

Over the years, as the roster of surviving players dwindled, it fell to Ms. MacBeth, who has died in Toronto at 96, to tell the stories of departed legends. It was not always a welcome responsibility.

“When anyone phones me, I feel stupid because I don’t know what happened way back in the Twenties,” she lamented six years ago. “They expect me to know all that.”

In retirement on Vancouver Island, she drove her own car as a nonagenarian and played organ at her church, piano at the Celtic Club and baritone ukulele for the Heartstrings, a seniors string band. She moved to Toronto to be closer to her family.

A slim and lithe 17-year-old rookie when she made the Grads in 1939, the 5-foot-4 guard displayed a confidence beyond her years on the parquet.

“I was fast and I was a better dribbler than most,” she said. “I called myself the Court Master. I’d rather make a pass than take a shot.”

As aggressive as she was on the court, she was quiet and respectful off it, deferring to older players, including such stars as Noel MacDonald. Ms. MacBeth was the youngest and penultimate player of only 38 to have ever worn a Grads’ wool singlet in the team’s quarter-century history.

Kathleen Jean MacRitchie was born on Jan. 22, 1922, at Saskatoon to the former Isabella MacLeod and Malcolm MacRitchie, who were Scottish immigrants. Her father operated grain elevators and young Kay grew up in a home of middle-class comforts during the Depression.

She played dodge ball in elementary school and never held a basketball until she was a teenager attending Westmount High in Edmonton. Bill Tait, who coached the Gradettes, the primary feeder team for the Grads, was teaching the high schoolers how to make a lay-up shot. Young Kay showed immediate promise and she learned the game by playing for a junior team called the Wasps.

She then led the Edmonton Cubs to the intermediate provincial championship and, when Muriel (Babe) Daniel retired, she became a Grad. She was the only player to make the roster without first doing an apprenticeship with the Gradettes, according to M. Ann Hall, a retired professor whose 2011 book, The Grads are Playing Tonight!, is the definitive work on the team.

The team was founded by J. Percy Page, a high school principal who transformed his graduating 1915 girls’ basketball team at McDougall Commercial High into the Grads. A benevolent disciplinarian, Mr. Page developed a series of plays that he had his players practice again and again.

When this latest recruit joined the Grads, he insisted she abandon her style of shooting with one hand, successful though it was, which he considered unladylike. The rookie didn’t like to shoot with two hands and decided instead to concentrate on setting up her teammates.

“Because of her size, she learned to deke, dribble and fake,” Mr. Hall said.

In her two seasons with the team, she won two Dominion championships, as well as two Underwood International titles in competition against American rivals. The Grads were also considered world champions during her tenure.

With the war escalating, audiences shrinking, travel more difficult, the home arena to become a depot for the air force and Mr. Page newly elected to the Alberta legislature, the decision was made to disband the team for the duration.

The Grads played their final home game on June 5, 1940, before 6,200 raucous fans at the Edmonton Arena. The hometown side defeated the Queen Anne Aces of Chicago by 62-52.

“What I hated about it was all the girls were getting married, the fellows were in the war, everybody was going away,” Ms. MacBeth told the Edmonton Journal in 1991. “The worst part was I was going to lose all these buddies. I never played on a team with such camaraderie.”

The Grads were credited with 502 victories in 522 games, an extraordinary winning percentage for any team in any sport.

She joined the team on a goodwill tour that summer, enjoying a respite in the Alberta resorts of Banff and Jasper before playing an exhibition softball game in Prince Rupert, B.C. They also visited Stewart, Victoria and the Lower Mainland.

In 1941, the MacRitchie family moved to Vancouver and Kay, by now working as a stenographer, joined the Hedlunds, one of several sports teams sponsored by an export company. The team claimed the Western Canadian championship in 1942 by defeating the Altomahs in Winnipeg.

“Sterling defensively, Miss MacRitchie was a nifty dribbler and started many scoring plays with her fast breaks and fine playmaking,” the Winnipeg Tribune reported.

In 1946, she married Ross MacBeth, an old beau with whom she had broken up with before the war. He spent four years overseas as a pilot in the Royal Canadian Air Force before they renewed their romance. The couple later settled in Comox on Vancouver Island, where they raised a family.

Ms. MacBeth became the sole surviving Grad on the death of Edith (née Sutton) Stone, who died in Edmonton six years ago at the age of 102.

Ms. MacBeth, who died on July 22, was a worthy representative for her great team, bringing to her recollections a no-nonsense spirit as well as a jaunty feistiness. At a news conference nine months ago for inductees into Canada’s Sports Hall of Fame, she insisted from her wheelchair in front of the cameras that retired hockey star Lanny McDonald, a dashing figure known for his bushy red moustache, give her a kiss. 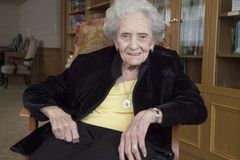