Supreme Court Chief Justice Richard Wagner says a 50-year embargo on public access to certain case files was intended to protect the secrecy of judges’ discussions, while saving the documents from destruction.

Last June, the court announced an agreement with Library and Archives Canada, little noticed at the time, in which it would transfer “collegial documents” – discussions between the judges arising from a case – for safekeeping with the proviso they are to be made public after 50 years.

The half-century embargo has been criticized by some retired Supreme Court judges and historians as decades too long to be useful. But Chief Justice Wagner, in his first public explanation of the rationale, stressed the importance of deliberative secrecy, calling it “part of our law in Canada.”

“So that a judge could never disclose or discuss in public the reasons why he would go one way compared to another way, to discuss why he changed his mind or that type of thing, because we want to protect the integrity of the process of releasing judgments,” he told a news conference in Ottawa. “That’s for the public interest.”

The news conference, in which the Chief Justice fielded questions from reporters for 50 minutes, is a new wrinkle from the court, and expected to be held yearly. Chief Justice Wagner said he sees it as part of the court’s attempt to better explain itself to Canadians. His predecessor, Beverley McLachlin, also took reporters’ questions, but in a “scrum” after an annual legal conference in August. (She also held a news conference when she retired in December.)

Chief Justice Wagner, who was appointed in December, decried the country’s high rate of Indigenous incarceration and stressed the value of dissent on the court. He described Canada as a “superpower” in its “moral values,” and criticized countries and leaders that “pretend to be democratic.”

“Right now, we see outside Canada that some of our basic values, fundamental values and moral values, are seriously attacked by other countries, leaders of other countries, who pretend to be democratic,” he said, without specifying which countries or leaders.

He also said the court is considering whether to hold a hearing outside Ottawa.

At one time, individual Supreme Court judges could decide what to do with documents that reveal their discussions with their colleagues. That changed in 2005, when the court took control of all collegial documents, a practice it revealed this spring to The Globe and Mail. Chief Justice Wagner had declined until now, however, to explain the rationale behind the 50-year embargo.

In the United States, bestsellers such as Jeffrey Toobin’s The Nine have been based in part on judges’ archives made public after their retirement or death. The U.S. rule is much the same as the Canadian rule used to be: Judges decide what should be done with their communications with other colleagues, after they retire or die.

Chief Justice Wagner waved off the practice of the U.S. Supreme Court. “I don’t know about the Americans, and I would prefer to follow the Canadian way of doing things.”

However, he pointed to some European countries to illustrate how seriously deliberative secrecy is viewed. “In certain countries like the Netherlands, the records would be kept for 75 years. In France, there’s no record. And it would be, of course, a crime for a judge to discuss even what was discussed during the deliberation … Same thing in Belgium.”

Chief Justice Wagner also said that before the 2017 agreement with Library and Archives Canada took effect, the collegial documents were “destroyed.” The court later clarified that he was referring to an informal but widespread practice.

James Phillips, a University of Toronto law professor and editor-in-chief of the Osgoode Society for Canadian Legal History, said 50 years is too long to withhold the papers – even for historians.

“Historians are not people who want to be able to access records ‘hot off the press.’ We know that some period of closure is likely to make the record more honest, and we want that.”

Cabinet documents in most countries, he said, are revealed after 30 years. “Why is a court different?” He suggested a shorter time frame, in most cases, than 30 years: the date of departure from the court of the last judge who was on the court with the judge whose notes are at issue.

Editor’s note: An earlier version of this article incorrectly said Supreme Court Chief Justice Richard Wagner confirmed that the court will hold a hearing outside of Ottawa. In fact, the court is still considering whether to do so. 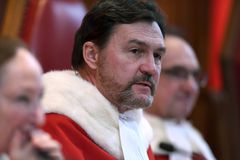