Members and observers of Canada’s law enforcement community say scrutiny of mental health interactions will not be complete without considerations of language diversity across the country.

They say police agencies have historically been ill-equipped to respond to crisis situations in languages other than English or French.

A recent, tragic example played out west of Toronto over the weekend with the death of Ejaz Choudry, a man living with schizophrenia shot dead during an interaction with Peel Regional Police.

Choudry’s family alleges one of the factors at play in his death, which is being probed by Ontario’s Special Investigations Unit, was the fact that police interacted with him in English despite the presence of a Punjabi interpreter.

Some police services say they’ve begun working on the issue by partnering with community services and drawing upon language skills from staff members across their forces.

But all acknowledge language gaps need to be addressed in order to better serve Canadians of all backgrounds.

“Historically … (police education and training on language considerations) hasn’t been common,” said Terry Coleman, a long-time officer with the Calgary Police Service and retired chief of the force in Moose Jaw, Sask. “I don’t think a lot of attention was paid to that.”

Choudry’s family, who has been calling for a public inquiry into his death, have said language barriers played a role in the events that led to his death on Saturday.

Relatives said the 62-year-old was in the middle of a mental health crisis when family members called the non-emergency line for help around 5 p.m. Three hours later, Peel Regional Police officers stormed Choudry’s apartment in Malton, Ont., fired multiple shots and killed him.

Choudry’s relatives alleged police did not make use of the interpreter or who was on the scene, instead shouting at him in English – a language he did not understand. It’s one of many issues family members have said is at the heart of their call for wholesale changes to the way police handle mental health calls.

“We want to create a system that is meant to be there for us,” said Choudry’s nephew, Hassan Choudhary.

Peel police issued a statement saying its board is working on a new plan that will ensure mental health calls, public health and safety, and community relations are considered in “a more holistic way.”

Coleman said he hopes language considerations factor into any pending reviews, especially in ethnically diverse regions such as Peel.

He said language barriers were relatively infrequent during his own career, which was spent in largely English-speaking jurisdictions, but said he did encounter situations when police were unable to communicate with people in crises who spoke French – Canada’s second official language. According to Statistics Canada’s 2016 census, 14 per cent of the country’s population report speaking a language other than English or French as their mother tongue.

Coleman said mental health crises that include communication challenges can quickly become risky for all concerned, noting patients shouldn’t have to navigate language barriers as they work through feelings of fear or distress. Families and friends who may be able to translate on the spot are not necessarily emotionally able to do so, he said.

Investigators struggle to do their jobs in such cases too, he said, adding it’s difficult to gather information on an evolving situation without the right communication tools. He said officers must also be wary of relying too much on translation services provided by people close to the person in crisis, citing situations in which domestic violence or other types of abuse may be a factor.

Coleman said some forces have begun to take the issue more seriously, but said services should have the matter on their radar. He suggested, for instance, keeping lists of language resources at dispatch stations for prompt use in evolving situations.

The Vancouver Police Department said it is already using this approach.

“A large percentage of our members speak second languages (50+ languages),” the force said in a statement. “In instances where there is a language barrier, mental health related or not, we are able to broadcast over our police radios for officers who are fluent in the language required to help responding members.”

He said new recruits spent half a day of their roughly 24-week training course with English-language learners at a regional college, where he said they work on navigating communication barriers.

The force also taps into in-house language resources and has access to a real-time telephone translation service as needed, but Hatchette said the issue still requires more attention.

“We solve problems as police officers, but a lot of times our solutions … potentially aren’t good for the community or aren’t supported by the community because we think we know how to do business best,” Hatchette said. “We’ve included community members in the solution.”

Roger Wilkie, co-chair of the Diversity, Equity and Inclusion Committee with the Canadian Association of Chiefs of Police, said Canada’s law enforcement community is committed to improving how it addresses mental health calls.

Communication barriers of all kinds are a consideration, he said, noting forces without direct access to language resources should know where to go to find what they need.

“Dedicated units that navigate mental health crisis calls will never be equipped to personally navigate all languages,” said Wilkie, who is also the deputy chief of Ontario’s Halton Regional Police Service. “What is expected, however, is that our officers know what resources are available to them to navigate language barriers to provide the best service they possibly can in the circumstance.” 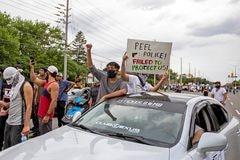 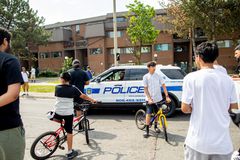 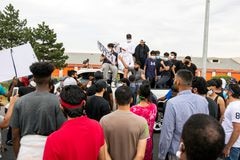