After his discharge from the U.S. Army in 1946, Levi Oakes returned home from the Pacific theatre and, like many men in the Mohawk communities of eastern Canada, became an iron worker.

He shared little about his overseas experience with his family. Sometimes, if a war movie was aired on television, he might remark that “I was there,” but did not elaborate, his daughter Dora remembered.

Then, around six years ago, he finally revealed what he had done in the jungles of New Guinea and the Philippines. He was a Code Talker, one of the Indigenous servicemen who used their native languages to stymie the enemy’s attempts to eavesdrop on their units’ communications.

He had been sworn to secrecy, so he kept it confidential for seven decades. “It was top secret,” he told his children.

Mr. Oakes, who was the last survivor of the men identified as Mohawk Code Talkers, died Tuesday night at home with his family at his side, Dora said. He was 94.

Like many Mohawks, he moved freely across the U.S.-Canada border and enlisted in the American military. He was among the 17 Mohawk speakers recognized under the Code Talkers Recognition Act, an American law that granted Congressional Medals to First Nations and individuals who participated in those programs.

"He served a unique role in fighting to protect this land, his homeland, and he’s an exemplary reminder of the many First Nations men and women who served this country with bravery and distinction,” Perry Bellegarde, National Chief of the Assembly of First Nations, said in a statement.

"These were immense contributions by Indigenous people to the war effort,” Liberal MP Marc Miller, the parliamentary secretary to the minister of Crown-Indigenous Relations, said.

“We’ve lost a hero. We’ve lost someone who selflessly served.”

Mr. Bellegarde and Mr. Miller were among the people who in recent years paid tribute to Mr. Oakes. In 2016, he received the Congressional Silver Medal. Last December, he was introduced in the House of Commons, met Prime Minister Justin Trudeau and was honoured at a meeting of the Assembly of First Nations.

Mr. Oakes is the third Indigenous Code Talker to pass away in the past few weeks. Earlier this month, two former Navajo Code Talkers died in the United States. Fleming Begaye Sr., 97, had served with the Marines who captured the atoll of Tarawa and the island of Tinian from the Japanese. John Pinto, 94, also trained as a Code Talker, but the war ended before he was deployed.

In a 2016 paper for the American Indian Culture and Research Journal, William Meadows, a Missouri State University anthropologist, noted that the American military first experimented with the use of native-language transmissions during the First World War after discovering that the Germans could monitor their telephone lines.

The success of that initial tactic led to an expanded use of Code Talkers in the Second World War. The Marine Corps program became the most prominent, Prof. Meadows wrote, because it was the largest, with 420 Navajo men.

But Indigenous servicemen speaking 33 different languages were used as Code Talkers by other branches of the U.S. military during the Second World War – including Comanche, Choctaw, Hopi and Mohawk.

After the Navajo Code Talkers started gaining public recognition, there was a push to acknowledge other nations, leading to the adoption of the Code Talkers Recognition Act in 2008.

It was only at that time that Mr. Oakes felt he could go public with his wartime activities, Dora said.

Louis Levi Oakes was born on Jan. 23, 1925, on the Canadian side of Akwesasne, the Mohawk community that straddles Quebec, Ontario and New York State. He was the second of the five children of Angus Oakes and Mary Porke.

He left school early and went to work in a steel plant in Buffalo, N.Y.

In a video interview with the U.S. Congress’s Veterans History Project, Mr. Oakes recalled that after the war started, he never considered serving with the Canadian army. He said that was because one of his brothers had been handcuffed and roughed up by Canadian police.

Instead, U.S. military records show that Mr. Oakes signed up in January, 1944, shortly after he turned 19. “I didn’t mind it, I was young,” he said in the video.

"They found out I was a Mohawk," he recalled. "The top commander gave me a piece of paper I had to translate to Mohawk."

That steered him towards the signals branch and a Code Talker position. As a result, before he boarded a troopship in San Francisco, he took the secrecy oath that he would heed for seven decades.

He was assigned to the 442nd Signal Heavy Construction Battalion and first deployed in Western New Guinea, then to Luzon, the largest island in the Philippines.

He described having to use a compass to navigate in the jungle, while he carried his field pack with telephone lines. Sometimes, he had bodyguards watching over him, to protect him from Japanese soldiers hiding in the mountains.

His brother Sam also served in the Pacific. After exchanging letters, he realized they were once posted only a few kilometres apart.

Mr. Oakes didn’t tell his family much about life at the front lines. One observation he made, which he also told Mr. Miller, was his bemusement at hearing the hero in a war movie instructing his men to wait until they could see the whites of their enemies’ eyes before shooting.

In his experience, he said, just the sound of a snapped twig would have been enough to unleash gunfire.

Following Japan’s surrender in August, 1945, Mr. Oakes spent four months there with the occupation forces. Eventually, his unit was disbanded, he was sent to the Philippines island of Leyte before shipping back to San Francisco.

Back home, he married Annabelle Mitchell and they raised seven sons and three daughters.

Like many other Mohawk men, he became an iron worker, commuting to construction sites in the United States to erect the metal skeletons of bridges and skyscrapers. He said he worked on bridges in Buffalo and New York.

Mr. Oakes was predeceased by his wife, Ms. Mitchell, and three of his sons, Gatlin, Lawrence and Charles. He is survived by his children Diane, Louis, Raymond, Wally, Dora, Debbie and Joseph. 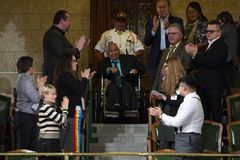