Ever since the Ontario election campaign started, Doug Ford’s campaign team has spent much of its time putting out fires – some inherited when he abruptly took over the Progressive Conservatives this winter, others he lit himself.

Three days before election day, the Tories were saddled with one more – one that uniquely threatened to send Mr. Ford’s appeal among voters up in smoke.

The $16.25-million lawsuit filed Monday against the PC Leader by Renata Ford, the widow of former Toronto mayor Rob Ford, is impossible to judge yet on its legal merits. Mr. Ford denies its many allegations, which include mismanaging the family business founded by his late father and failing to meet financial obligations to his late brother’s family. He also suggested that the suit is the culmination of efforts to extract money from him while he’s campaigning.

But politics isn’t about perfectly litigated verdicts – especially when something both sensational and highly complex comes onto voters’ radars right before they head to the polls. And because of the many ways it could reflect on Mr. Ford, this 11th-hour surprise has the potential to be a breaking point for voters who have been struggling with how many warning signs they can look past.

There has been a lot already in this race to put off people who were initially prepared to support his party, which explains why the PCs’ big lead at the start has eroded into an apparent tie for popular support with the NDP. But amid all that – the lack of a real platform, obvious ignorance about how the provincial government works, allegations he was an active player in the corruption of his party’s internal operations under his scandal-plagued predecessor, Patrick Brown – Mr. Ford maintained some basic pillars of his appeal to his support base.

One of those had to do with his family, which for all its well-documented troubles is nothing if not larger than life. Mr. Ford launched his campaign for the PC leadership in his mother’s basement. He gets a catch in his throat when he invokes his brother up in the heavens and gives the impression that the one thing he absolutely won’t stand is anyone messing with people he cares about. The idea that he is someone who will stop at nothing to defend his own has a certain appeal, if you figure that when he’s premier you might fit that bill, too.

Another, probably more important part of his appeal has been that he’s a successful businessman. Not knowing the ins and outs of the provincial bureaucracy, or how a bill becomes a law, was cast as less a bug than a feature of someone who would be able to bring his no-nonsense, back-to-basics private-sector expertise – the sort he’d proven in building up Deco Labels, the family business – to Queen’s Park.

Probably there is something that could simultaneously complicate both these pitches, as businessman and family man, more than his beloved brother’s widow claiming that she’s been left to fend for herself while Mr. Ford (and his other brother, Randy) ran Deco into the ground – paying themselves overly generous salaries while amassing $5-million in losses over a seven-year period. But it doesn’t readily spring to mind.

Of course, there are plenty of people planning to vote for the PCs not because of Mr. Ford’s characteristics as a leader, but in spite of them. It’s probably not a coincidence that the Tories’ support seemed to stabilize and stop bleeding about a week ago, when they finally began to showcase other high-profile candidates as much as him.

But yet another potential consequence of Monday’s news is that it threatens to remind those voters of how difficult it could be for the team around Mr. Ford to bring normalcy to his government.

Rob Ford’s time as mayor, lest anyone forget amid the solemn remembrances, was bedlam. Doug Ford is more composed than his troubled brother was. But even for those who might be skeptical of Ms. Ford’s lawsuit and its timing, its mere existence is a reminder of the chaos that follows this family.

Maybe it will prove too late, with too many votes already determined, for that to matter. Maybe it should be, given the complexity of what is alleged.

But the last thing the Tories needed, at this point, was another reason for Ontarians to consider what they may be getting themselves into. 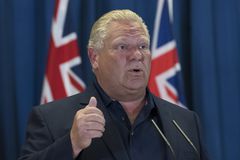