Laurentian University fired dozens of professors and slashed its program offerings in an unprecedented round of cuts on Monday aimed at tackling the university’s insolvency.

The Sudbury school announced the elimination of 58 undergraduate and 11 graduate programs, which make up about a third of its course offerings.

It also laid off a large number of professors, at least 80, according to faculty members, or somewhere between a quarter and a third of full-time staff, although an official tally was not released by either the faculty union or the university.

Laurentian announced in February that it was seeking creditor protection under legislation usually used by private corporations. The university had accumulated debts of nearly $100-million and was running consistent deficits when – after spending research money to keep the lights on – it revealed it was weeks from being unable to meet its payroll.

The job and program cuts are key aspects of the restructuring, the first of its kind for a publicly funded university, which has been negotiated behind closed doors over the past two months.

President Robert Haché said in a statement that the changes are difficult but necessary, and will require a period of “profound adjustment.”

Professors and other staff received e-mails inviting them to group video calls on Monday morning in which they were told their jobs had been eliminated.

Nadia Verrelli, a professor of political science, said it was devastating to learn the tenured job she worked so long to earn was gone in a moment. The call lasted just 15 minutes, as an administrator and then a human resources person read prepared statements. It was cold, she said. Her colleagues are hurt and trying to support one another. Many are apprehensive as they contemplate leaving the community or switching careers relatively late in life.

“It feels like the rug has been pulled out from under you,” Prof. Verrelli said. “It’s not easy to get tenure, and when you do it’s such a relief. But today shows it doesn’t mean anything. They can just cut you, cut the program.”

Political science, philosophy, physics, environmental science and entrepreneurship were among the programs axed, along with many others.

Fabrice Colin, president of the Laurentian Faculty Association, said it was a sad and distressing day for members. Many regard their work as much more than a job, he said.

“It was such a horrible process. It was not human, it was cruel,” Prof. Colin said.

The group that represents Ontario faculty associations called on Ontario’s Minister of Colleges and Universities, Ross Romano, to resign, saying the government knew the depths of Laurentian’s financial difficulties for months and refused to act.

A spokesman for Mr. Romano, Scott Clark, said it was regrettable that Laurentian had to take drastic measures to get its finances in order.

The process has upset students whose programs of study have disappeared and whose professors have lost their jobs. Some faculty said on Monday they were getting e-mails from students asking what the changes would mean.

The university said it expected about 10 per cent of undergraduates, or about 600 of the 6,000 enrolled at Laurentian, to be affected. Many more would have taken electives in areas that have been eliminated.

The Canadian Federation of Students accused the university of using the court’s insolvency process to avoid public scrutiny and consultation, calling it a “manufactured crisis” that the government chose not to stop.

Jean-Charles Cachon, a professor of entrepreneurship, was among those who lost their jobs. He said most of the people in the group video call he attended were older members of faculty. One person asked a university representative if they were targeted due to their age. The question did not receive a response.

Prof. Cachon said he fears the long-term impact of these cuts on Sudbury, where the university is the third-largest employer and a source of future workers.

“There’s going to be a compounding effect,” he said. “We might have introduced a structural breakup that will induce an exodus of young people from Sudbury and the North.” 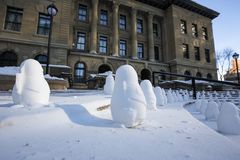