A British Columbia Supreme Court judge suggested Thursday he will consider new options to address the future of an injunction against blockades by people opposed to logging old-growth trees on part of Vancouver Island.

Justice Douglas Thompson expressed concern about the situation that’s unfolding in the Fairy Creek area north of Port Renfrew after hearing from lawyers representing protesters and the RCMP.

B.C. forestry company Teal Cedar Products Ltd. has applied to the court to extend by one year the injunction order against protest blockades. The injunction expires on Sept. 26.

“Perhaps, the only thing everybody agrees upon right now is what’s being done is not working,” said Thompson, who instructed lawyers to come to court Friday prepared to discuss the structure of the injunction.

He said he will not deliver a decision Friday on the company’s application and his ruling will come after Sept. 26.

About 1,000 people have been arrested in the Fairy Creek area since May when the RCMP started to enforce an earlier B.C. Supreme Court injunction against blockades erected in several areas near logging sites.

The court heard from lawyers representing the protesters who argued people from all walks of life with environmental concerns are being treated like terrorists by police and the company.

A lawyer for the Mounties said police are being tasked with enforcing a court injunction under increasingly difficult circumstances.

“My overall point will be that there is nothing here to lead this court to the conclusion that there is a general problem with the way the RCMP is enforcing this injunction,” said lawyer Donnaree Nygard, who represents the Mounties on behalf of the Attorney General of Canada.

She said a video that shows an RCMP officer stomping on a protester’s guitar was “probably unnecessary,” but throughout the injunction period there is not enough information “to find or imply the RCMP acted inappropriately in those situations.”

Nygard cited a court affidavit filed by RCMP Chief Supt. John Brewer, who is a senior officer at Fairy Creek, saying “this is the most complex operation he has been involved in. He says the ground shifts every day.”

Lawyer Elizabeth Strain showed the court videos and photographs of police allegedly unsafely removing protesters from trees and ditches, and pulling off face masks of people at the blockades before dousing them with pepper spray.

The protesters include youth, teachers, retired scientists, doctors, lawyers and students with fears about climate change who want to protect the trees. They are being treated like terrorists, she said.

“These people are not terrorists,” said Strain. “They are regular people who have come down to protest. These are people who are terrified for the future. They are being met with militarized police force.”

Thompson told Strain the videos “rankled” him at times because the protesters appear to be employing tactics purposely designed to make enforcement of the injunction more difficult.

But he later expressed concern to Nygard about seeing video of police removing a young woman’s face mask and spraying her with pepper spray.

“At some level, don’t I have to reach a conclusion about the way they are enforcing the court order?” Thompson asked.

Teal Cedar lawyer Dean Dalke told the court Tuesday the blockades are impeding the company’s legal rights to harvest timber and alleged the actions of the protesters pose dangers to employees and the RCMP.

Editor’s note: In a Sept. 16 story on a court application to extend an injunction in the Fairy Creek area of British Columbia, The Canadian Press erroneously reported that lawyer Matthew Nefstead said granting the extension should be denied because it could be viewed by the police as granting them further powers. In fact, he made the argument in opposing a separate application on behalf of the RCMP that asked the court to give the police more powers. 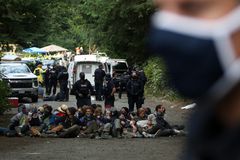 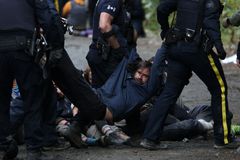 At Fairy Creek, a war in the woods as police seek more power to clear blockades
September 13, 2021 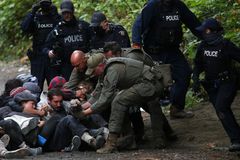