Back in Toronto observing a 14-day quarantine, with an eye toward being on the ice with teammates for the start of training camp July 10, the Maple Leafs goalie knows its crunch time to decide whether or not the pandemic-hit 2019-20 season can actually resume.

“It seems like it’s the 11th hour here,” Andersen said on a conference call Tuesday. “Hopefully things will progress a little bit in the next week.”

The NHL and NHL Players’ Association continue to negotiate a number of issues related to its return-to-play protocol, including heath and safety measures, the location of two hub cities poised to play host to 12 teams each in fan-less arenas, and an extension to the collective bargaining agreement for a league that has already lost boatloads of money since the schedule was paused March 12.

The NHLPA’s rank and file will have to sign off on whatever plan emerges – a simple majority will get it over the line – but echoing comments made by Montreal Canadiens netminder Carey Price last week, Andersen said he needs more information before deciding which way to lean.

That date could be pushed back a few days, but the league aims to resume under its 24-team format at the end of July or early August with players isolated away from the general population in so-called “bubbles” in hopes of keeping COVID-19 at bay.

Still, there are questions that need answering.

“I’m not quite 100 per cent confident yet,” Andersen said on whether the season can be completed safely. “The league is very adamant of working towards that. Once we get to the hub cities, I think everyone will have to be confident and the league will have a good setup.

“But it’s a matter of getting there.”

Andersen spent a large chunk of the hiatus isolating with teammate Auston Matthews at the star centre’s house in Arizona.

The pair posted videos and pictures on social media of their time together in the desert sun, including an impressive alley-oop dunk off a pass from the roof of the sprawling mansion into a net attached to a sun-drenched pool.

“We tried to share some of the fun we had,” Andersen said. “We get along great. Just trying to make the best of it … very lucky to be able to go down there.”

He was also probably lucky to leave when he did.

Andersen said he’d travelled to California to work with his personal skills coach by the time Arizona saw its novel coronavirus infection rates start to spike in mid-June. The Dane added he and Matthews had parted ways by the time the 22-year-old reportedly tested positive for COVID-19. The Leafs have declined to comment on the story first published June 19 by The Toronto Sun, citing NHL protocol related to the virus.

Andersen, who skated with Matthews down south, also wouldn’t touch a question related to his teammate’s health Wednesday, but Toronto’s No. 1 goalie said he’s been back in Toronto “for quite a bit now” and has returned to ice at the team’s practice facility during his quarantine.

“I’ve been able to go to the rink and work out a little bit, so it’s not been that boring,” he said. “But I’ve been locked up besides that.”

Andersen was 29-13-7 with a .909 save percentage and a 2.85 goals-against average in 52 starts – his worst statistical performance with the Leafs since being acquired from Anaheim in 2016, although he was hung out to dry by suspect defensive play on numerous occasions – when the 2019-20 season was halted.

He suffered a neck injury in early February, which came in the middle of an 12-game stretch where his save percentage dipped to .871, but was 5-1-1 with a .931 mark in seven starts before the pause.

If the season does resume, Toronto will need Andersen at or near his best to get past the Columbus Blue Jackets in the best-of-five qualifying round leading into the usual 16-team playoff format.

But there’s still plenty of ground to cover before the games can actually begin.

“I want to play,” Andersen said. “I don’t want to just sit and waste the summer and the season.” 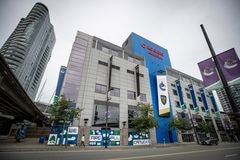