The pants were the first to go.

As people around the globe settle in to self-isolation, working from home, and, in some cases, quarantine, how – and whether – we dress for our days is also in flux.

“I don’t know if anybody is really putting on pants,” said Toronto resident Will Sydney, though noting that he did, at that moment, have pants on because he had recently ventured outside for groceries.

Meanwhile, beards are growing wild, bras going unworn. Executives are calling into video meetings in grubby T-shirts, and it may be only the beginning of a process that will continue as Botox-less foreheads furrow, nail extensions grow out and eyelash extensions shed in the weeks to come.

As Edmonton resident Elena Porter said on Twitter, “My natural hair colour and I are going to get reacquainted.”

Others describe forgoing makeup, cutting their partner’s or kids’ hair, or taking the scissors to their own bangs.

Cathryn Naiker, a Toronto-based comedian, is among the legions of women taking solace/rejoicing in not wearing a bra as part of their at-home attire.

“If I’m social distancing and I’m not going out anywhere, then it’s immediately like, what’s the point?" Ms. Naiker said.

Ms. Naiker, who describes herself as a formerly “prominent bra-wearer,” says the bra isn’t the only thing to go in her new social-distancing life, and that she hasn’t been wearing makeup and is letting her nail polish chip away.

“I think I just have enough to worry about, and I’m not motivated to keep up with certain appearances when it’s just me,” she said.

Tracey Lindeman, a freelance writer based in Ottawa, has been working at home for almost five years, and says she’s gotten a good system down, including establishing different wardrobes for relaxing time and work time.

“Never in my life did I think that staying inside for days at a time would prepare me for anything," she said, by phone from Ottawa.

“I think there’s no rules except the rules that you make for yourself, so just do what feels comfortable to you …” she said. “If you want to wear sweatpants and you’re just as productive as if you were wearing jeans or a suit, do that. You’re allowed to be comfortable in your house. … Just do what you need to do.”

For some, especially right now, that means not doing a lot. Mr. Sydney, a server who was laid off in recent days, says his self-isolation look was based on a decision to grow out his beard, which he would never normally do.

“It’s so bad and patchy, I literally never let it grow in my whole adult life, because it gets so gross,” he said, adding it seemed like the right move at a time when it could be done with a “complete lack of social and economic consequences. “

The 32-year-old has been documenting his facial hair on Instagram, where people seem to be enjoying the joke.

“At this point, people are looking for any source of entertainment,” he says.

Mr. Sydney says he usually dresses casually in a T-shirt and jeans, but even that feels dressy at the moment. Then again, he speculates that maybe it isn’t a bad thing. With so many other things to consider, he says maybe looking presentable can be one less thing to think or worry about.

“Yeah, we all look bad. The social contract is sort of tenuous right now. The deal that we’re supposed to look our best is kind of out the window," he said. “It’s something nice to think about, that people are letting things fall by the wayside that are not important.” 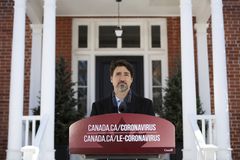 When does social distancing end? These graphs show where we’re heading and why
March 23, 2020 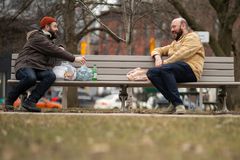