Premier Brian Gallant will convene a new session of the New Brunswick legislature on Oct. 23, but there are increasing signs his government may not be able to hold on to power.

Gallant’s Liberals won 21 seats in last month’s provincial election – one fewer than the Progressive Conservatives – with the Green Party and the People’s Alliance each winning three seats.

Green Leader David Coon said Wednesday that after discussions with both the Liberals and Tories it became clear the conditions for a formal agreement are not present.

Coon said his party has drafted a declaration of intent to find solutions to co-operate in the legislature, and is asking all MLAs to consider endorsing it.

“The results of the election of Sept. 24 are unprecedented in our provincial history. The seat distribution challenges all elected representatives to find a way to work together in the best interest of all citizens,” Coon said.

The declaration asks members to agree to such principles as the right to a healthy environment, Indigenous rights and linguistic equality.

Gallant called a news conference about an hour later to say he’d had a conference call with his caucus members and all would sign the Green’s declaration.

“With the three Green party MLAs all indicating a willingness to vote in favour of a progressive throne speech that would be aligned with their declaration of intent, we believe we have a clear path to earn at least 24 votes,” Gallant said.

But 24 votes would still be one shy of the 25 required to win a majority vote in the 49-seat legislature, and no party has yet offered up a member to act as Speaker.

Gallant appeared to repeat his earlier call for disgruntled Tories to find a way to support the Liberals, saying they’d heard from some MLAs who felt uneasy at the prospect of a Progressive Conservative government propped up by a third party.

“We are hoping that other progressive MLAs will take action to allow for a progressive agenda to move forward here in New Brunswick or someone who wants to stop Blaine Higgs’ blatant attempt to seize power to govern with 22 members, like Stephen Harper did, will take action,” Gallant said.

Coon said he’s not willing to say at this point if the Greens will support the throne speech – it will depend on its content.

Officials with the Progressive Conservative Party said leader Blaine Higgs was in meetings Wednesday afternoon and would not be offering any comments. On Tuesday, Higgs repeated his call for Gallant to resign and make way for a Tory government.

People’s Alliance Leader Kris Austin – who previously said his party would be willing to prop up the Tories for a time – is making it clear he has no intention to sign the Green’s declaration or support a Liberal throne speech.

Austin said he was uncomfortable with some items in the Green declaration, but wouldn’t give specifics.

“I think it’s pretty broad based and open to interpretation, so I’m hesitant to sign on,” he said.

Austin said Gallant made it clear on election night he had no intention of working with the People’s Alliance, so at this point, his three member caucus would vote against the throne speech.

If all the Tories were to do the same, it would be enough to topple the government.

“I’m confident our caucus is firm on what we’re doing. Mr. Gallant still needs that one more vote to appear from somewhere and I’m not sure where he’s going to get it,” Austin said.

“I think in the best interest of New Brunswickers he’s got to see the writing on the wall and resign so we can move on,” he said.

The Liberals have announced an updated cabinet, while the Tories say they’re forming a cabinet in preparation to form government.

Gallant said the minority situation represents a historic opportunity to do things differently and better by working together.

Coon said voters have asked for something different.

“No one won the election. We all want the citizens of New Brunswick to be the winners. For them to be winners, we need to be able to collaborate in the house across party lines,” he said. 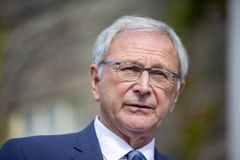 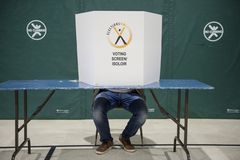