If the devil is in the lofty details, then Wednesday’s Throne Speech seems positively angelic.

The Liberal government made a dizzying number of health-related promises in the spendthrift action plan, but the commitments were so vague, you could almost see them float away like clouds as soon as the words were uttered by Governor-General Julie Payette.

In the 2019 Throne Speech, Prime Minister Justin Trudeau’s government said: “Pharmacare is the key missing piece of universal health care in this country. The government will take steps to introduce and implement national pharmacare so that Canadians have the drug coverage they need.”

One re-election and one year later, this is the promise in the 2020 Throne Speech: “The government remains committed to a national, universal pharmacare program and will accelerate steps to achieve this system.”

Accelerate? When you’ve been sitting on your hands for years, it’s not possible to go any more slowly.

This time there is at least a scintilla of specificity. The Liberals have promised a rare-disease strategy, and a national formulary. They also vow to work “with the provinces and territories willing to move forward without delay,” which, at last count, is approximately zero, and will remain so until there is some cash on the table.

Similarly, there was a grandiose vow to ensure every Canadian has access to a family doctor or primary-care team. Never mind that Ottawa has zero ability to make that happen.

There is also a promise of “significant, long-term, sustained investment” in child care, which is probably the single most exciting vague semi-commitment made in the Throne Speech. Child care is not strictly speaking a health issue, but is a key determinant of health for children and parents alike.

The key missing piece of the puzzle though is: How much money? And when the Liberals say they will “learn from the Quebec model,” does that mean parents will be guaranteed child care at an affordable flat rate? (In Quebec, subsidized daycare is $8.35 a day, but there is a dire shortage of spots.)

The promise of a Canadian Disability Benefit is, well, promising. But, when we’re told it will be “modelled after the Guaranteed Income Supplement for seniors,” does that mean it will have the same income cutoff points (i.e. you are only eligible if your income is less than $18,600)? And how will Ottawa ensure that the money isn’t clawed back by provincial disability plans? Those details matter mightily.

The government also pledged a “better process to determine eligibility for government disability programs and benefits.” Again, that’s setting the bar pretty low because the process now is often humiliating and illogical – for example, making people with permanent disabilities demonstrate, over and over again, that they have not been miraculously cured.

There are welcome vows to develop national standards for long-term care homes to better protect institutionalized elders who have suffered massively during COVID-19. But when have we ever agreed to national health standards for anything? The reading of the speech was barely done when the provinces were caterwauling about intrusions into provincial jurisdiction.

What the provinces want is money, money, money. Health care dollars with no strings attached. They didn’t get any, and just as well, because they haven’t made any concrete promises either.

Of course, the Throne Speech was largely about COVID-19, the “insidious enemy.” But the focus was almost exclusively on the economic fallout of the pandemic.

When it comes to dealing with the coronavirus itself, “the most serious public-health crisis Canada has ever faced” and “priority number one,” again the plans were remarkably hazy.

There was far more detail on what the federal government has done – $19-billion for bolstering health-system capacity and $2-billion for the “safe return to school fund” – than what it plans to do to attenuate the second wave.

Ottawa will give personal support workers a wage top-up, but we don’t know the amount. It will ensure that every Canadian will get a coronavirus vaccine. How? By “exploring a full range of options.”

Ramping up testing is yet another priority. All we need, apparently, is another committee, the Testing Assistance Response Team (think Mr. T., but brandishing a cotton swab instead of his fists) to supplement the Immunity Task Force and Vaccine Task Force. 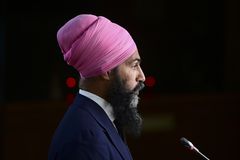