Coronavirus information
The Zero Canada Project provides resources to help you make the most of staying home.
Visit the hub
Jeff GrayQueen's Park Reporter
Kelly GrantHealth reporter
Published May 27, 2020 Updated May 28, 2020
Comments
Please log in to listen to this story. Also available in French and Mandarin. Log In Create Free Account

Ontario’s local medical officers of health are calling for more detailed benchmarks before reopening more of the province’s economy, while urging Queen’s Park to allow areas harder-hit by COVID-19 to open up at their own pace.

Documents obtained by The Globe and Mail detail a proposal from the province’s 34 regional medical officers of health that lists specific potential targets for infection rates and other criteria submitted to the province’s Chief Medical Officer of Health, David Williams.

Unlike the reopening framework unveiled by Premier Doug Ford last month, which includes few concrete numerical targets, the proposal calls for an array of exacting benchmarks to be hit before any further lifting of COVID-19 restrictions.

Among them are a sustained decrease in the 14-day moving average of cases found in the community and a decrease in the proportion of hospitalized cases over 14 days. The proposal also says individual regions must achieve an effective reproductive number of less than one – meaning that each new case is infecting on average fewer than one other person.

Other proposed benchmarks include targets for hospitals to be met in each local health unit, such as keeping the occupation rate of acute-care beds below 85-per-cent capacity.

The proposal also calls for a regional approach in which some parts of the province could reopen more slowly. In a letter addressed to Dr. Williams, Lawrence Loh, the Medical Officer of Health for Peel Region, west of Toronto, notes the higher concentration of novel coronavirus infections in the Greater Toronto Area, as well as in Windsor and Ottawa.

“You’ll certainly agree that the data are clear: COVID-19 has unfolded differently in many different parts of the province,” Dr. Loh writes.

According to provincial data, the GTA has more than 75 per cent of active COVID-19 cases, with the bulk of these in the City of Toronto and Peel Region.

Dr. Loh also calls for more resources to meet goals that provincial officials have previously said Ontario had either achieved or was close to achieving, such as contacting 90 per cent of new positive cases within 24 hours.

Ontario’s current reopening framework calls for “a consistent two- to four-week decrease in the number of new daily COVID‑19 cases” – a test Ontario failed recently with a steady rise in new infections last week. However, it reported just 292 new cases on Wednesday, the second day in a row below 300.

While both Quebec and Alberta have moved to limit reopening measures in areas still seeing larger numbers of new cases, Mr. Ford has been cool to the idea. While he said on Wednesday the province’s health legislation currently allows local medical officers of health to make their own decisions on lifting restrictions in their regions, he added dividing the province up would be logistically difficult.

His Health Minister, Christine Elliott, said her officials were listening to local medical officers of health as the province looks to its next stage of reopening.

Dr. Williams, who has also previously warned against a patchwork reopening, said local medical officers of health have been advising on metrics the province should be using as it looks toward the next stage. He said these benchmarks build on the province’s existing framework, and would allow for regional breakdowns to guide local medical officers of health in harder-hit areas if they decide to slow reopening measures.

“I saw it more as a positive thing,” Dr. Williams said. “My approach [is] it’s a good thing they are doing, and they are keeping me advised of it.”

Charles Gardner, the Medical Officer of Health for the Simcoe Muskoka District Health Unit, said it makes sense to allow regional flexibility in reopening plans because the coronavirus is pummelling some parts of the province and sparing others. His health unit, which includes Barrie, Orillia and a swath of Ontario’s cottage country, reported just one new case Wednesday.

That’s a dramatically different picture from some parts of the Greater Toronto Area, where the seven-day moving average number of cases is still rising.

“[The GTA] health units are still very, very busy in responding to case and contact follow-up,” Dr. Gardner said. “They had concerns that a further relaxation, if done too quickly, could exacerbate that and could make control of the pandemic more difficult.”

Not only does the virus appear to be hitting the Toronto area much harder than the rest of the province, it is hitting certain neighbourhoods in Ontario’s largest city harder than others. Toronto’s Medical Officer of Health, Eileen de Villa, released detailed data on Wednesday showing where the city was seeing most of its COVID-19 cases.

While the numbers show cases in every corner of the city, poorer neighbourhoods in Etobicoke, in the city’s northwest, and in Scarborough, in the northeast, were faring the worst.

Mayor John Tory said he was not surprised, given that many in these areas live in small apartments with extended families and may have been to workplaces where the virus can spread: "I think this represents a huge opportunity for us to support people better, to help educate people better.” 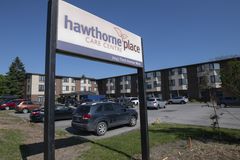 Follow Jeff Gray and Kelly Grant on Twitter @jeffreybgray @kellygrant1
Report an error Editorial code of conduct
Due to technical reasons, we have temporarily removed commenting from our articles. We hope to have this fixed soon. Thank you for your patience. If you are looking to give feedback on our new site, please send it along to feedback@globeandmail.com. If you want to write a letter to the editor, please forward to letters@globeandmail.com.
Comments