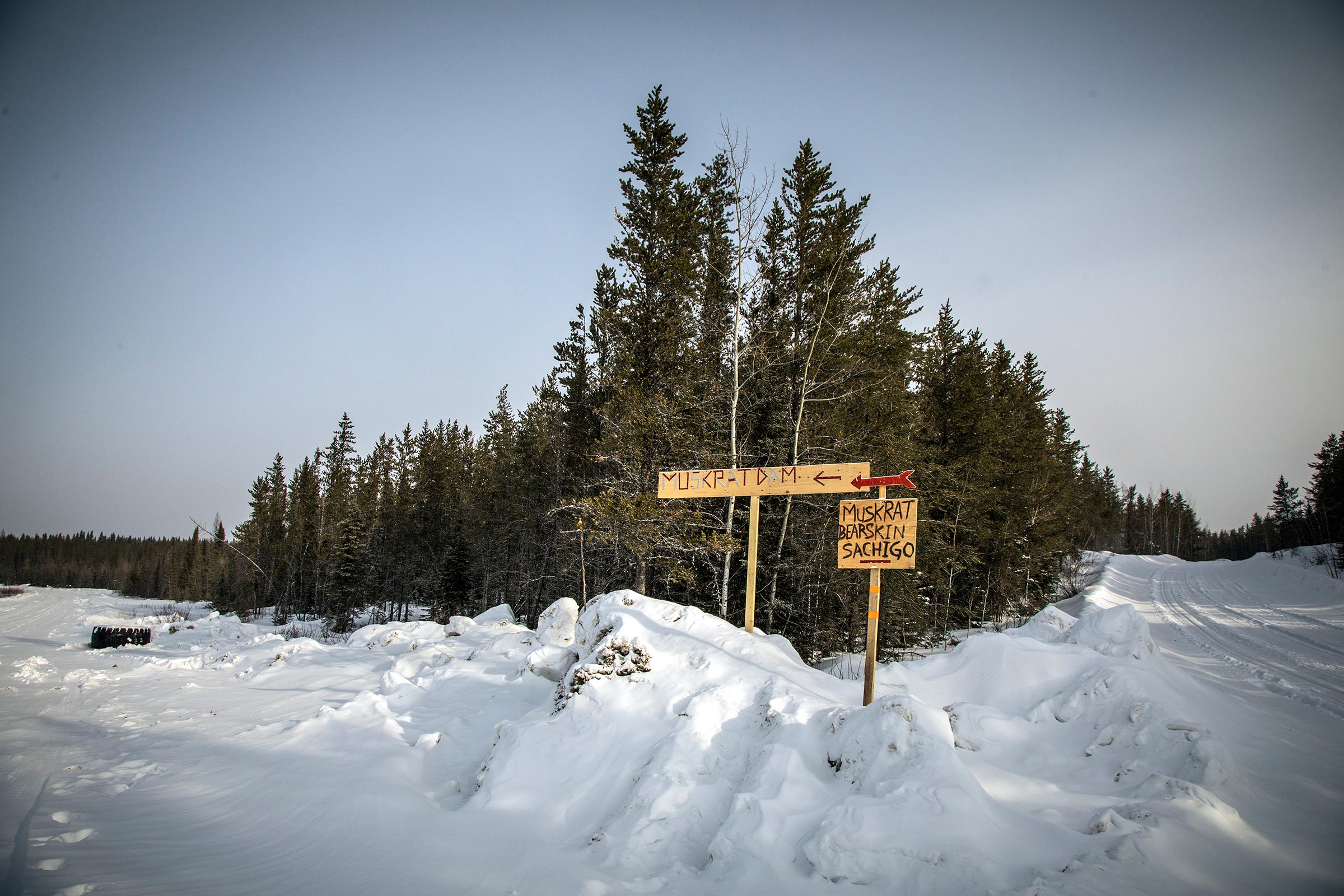 The Globe in Thunder Bay

For many Northwestern Ontario students, going to high school means leaving their First Nation communities and families for Thunder Bay. This is their journey back

Nearly every year, the halls of Dennis Franklin Cromarty High School in Thunder Bay empty for a few days in late winter as a handful of students, teachers and the principal head out for an epic road trip to one of the 23 First Nations that make up the school’s community.

The Indigenous children of Northern Ontario, from places such as Bearskin Lake, Poplar Hill, Pikangikum, Fort Severn and Keewaywin, have travelled a fraught path for generations. It was a forced passage once, as First Nations youth were torn from their families and sent to church-run residential schools to unlearn their culture, traditions and language.

Today, the decision to leave their community is a chosen one – but it is still one of the only options available to high-school-age kids in fly-in communities. Dennis Franklin Cromarty, a First Nations institution run by the Northern Nishnawbe Education Council, is one of two secondary schools servicing all these communities in Northern Ontario. The other is in Sioux Lookout.

Each year, the school picks a different NNEC community to visit, to reconnect students with family who are able to meet them there. It’s also an incentive for kids who perform well, academically. This year, the kids travelled 920 kilometres to Muskrat Dam, an Oji-Cree reserve. In addition to seeing loved ones, they offered advice to the next wave of students who will, one day, also have to leave home for school.

The odyssey is an emotional one for the kids and for their parents and caregivers alike. Thunder Bay is a city with a reputation for being dangerous for young Indigenous people. And kids are billeted by strangers, during teen years, some of the most turbulent in a lifespan. Between 2000 and 2011, six students died; their deaths and one other were subsequently the subject of a coroner’s inquest. In the intervening years, the school has added services to help students who are struggling with loneliness, addiction issues and depression.

Mike Kompon, athletic co-ordinator at Dennis Franklin Cromarty High School, says some students bounce among multiple billets during their stay. He hopes for better facilities. “We are really trying to fight to get a student living centre so that they all can live together, because they’re all scattered.”

While the students are encouraged to think of the school as their second home, the winter road trip is a homecoming for students, even if they aren't in their own community. The visit is a chance for them to feel close to their roots.

On a frigid Thunder Bay morning, 10 faculty and 13 students arrive at Dennis Franklin Cromarty High School with duffle bags, suitcases and pillows. It’s about 6:30 a.m. and the sun isn’t out yet. The students are groggy. Teacher Scott Vis and athletic co-ordinator Mike Kompon are in the parking lot, preparing three pickups and two SUVs for the long trip to Muskrat Dam.

Student Hayden Morris Grey (right) is looking forward to reuniting with his aunties and uncles, who he hasn’t seen in about six months. He usually spends his summers in Muskrat Dam, pitching in wherever help is needed.

Ethan Mamakwa, 17, is in Grade 11 at Dennis Franklin Cromarty.

“I was pretty nervous. I was nervous about what people would say about me. I didn’t know if there would be any other Native kids, but I was told that there would. I wasn’t sure about making friends, but thankfully the first day, some people actually came and said hi to me when I was like 10 years old.”

Robyn Chikane is from Weagamow Lake and is an exceptional visual artist. She's quiet, but her powerful art speaks volumes. Recently, her work was featured on stage with author and journalist Tanya Talaga during Ms. Talaga’s Massey Lectures.

Pickle Lake is the last town on Highway 599. North of this, drivers must take a gravel road that meets a “winter road” – bog and muskeg, impassable by vehicles in summer, is paved with ice in sub-zero temperatures. As the cars creep northwards, the terrain gets more treacherous, and cell service disappears. From here, students and faculty will travel in a convoy, to ensure everyone’s safety.

Ernie Harper, a counsellor for Keewaytinook Okimakanak Secondary School Services, leads the five-car convoy. He left Muskrat Dam with his children in September, 2018, after his wife died. He says his son, Brennan, who has a learning disability, has thrived at Dennis Franklin Cromarty.

“We should have moved to Thunder Bay a long time ago. All the resources that the school has to offer have been quite tremendous.” His daughter, Aaliyah, 16, attends another high school in the city.

The winter road begins at Weagamow Lake. Air transport is costly, so the road is a vital tool for getting supplies into remote communities.

At North Caribou Lake First Nation, sewage from a burst lagoon has frozen into a treacherous slick, threatening the community’s water supply and making the road nearly impassable.

Chief Dinah Kanate, of Weagamow Lake, guides the group through.

Northern communities are “dry” and checkpoints do inspections for contraband.

With five vehicles and temperatures below -33 C, Chief Kanate allowed the DFC convoy to pass through without inspection.

After an exhausting drive, the last few kilometres of which proceeded at a crawl, the convoy arrives at 1 a.m. at the Muskrat Dam Band Hall, the community centre for the town. The tired crew has sandwiches and tea, then drives to the school, where they will sleep for the duration of the stay.

Student Adrienne Mamakwa clasps her pillow as she searches for a place to sleep inside the school gymnasium. It’s been a long day -- 16 hours of driving, including the gruelling passage of the snow-covered winter road amid semi trucks hauling supplies.

Ethan Mamakwa "didn't mind staying inside the gym, having a bunch of roommates."

Over the four days of the visit, the school is a hub of activity. The younger kids and the visiting students bond over sports. Parents and relatives occasionally stop by. The community overall is energized by the presence of the new influx of kids, who have a chance to tell their younger counterparts about their experience in the city.

“Family is so important to everyone,” says Mike Kompon (centre), athletic co-ordinator at Dennis Franklin Cromarty. “They’ve got to live their life without their family during adolescence. They are going through their first boyfriends, their girlfriends and puberty. A lot of us turned to our parents.”

Sharon Angeconeb, the school principal, says the trip offers her and her staff a chance to talk with parents and First Nations community leaders to reassure them that their children will receive support while living in Thunder Bay. “There is a lot of fear in terms of Thunder Bay," she says. “Parents want to know if they’re going to send their child to Thunder Bay that they’re being looked after, that they’re safe, that if they need something, someone will make sure that they are taken care of.”

Connecting with elders is an important part of the homecoming trips. Here, Adrienne Mamakwa (left) and Kelsey Peters deliver a blanket to Roderick Fiddler. “It’s been a long and cold winter,” Mr. Fiddler says in Oji-Cree. “This blanket will keep me warm."

Ms. Fiddler has been going to school in Thunder Bay for about a year and misses her mom, grandparents and siblings, who live in Sandy Lake First Nation. Her favourite school memory so far is travelling to Toronto with seven other students to attend a conference and listen to a motivational speaker. Her advice to future students of Dennis Franklin Cromarty: “Be safe. Don’t get into the bad stuff.”

Students head to the hockey arena.

A major part of the winter road trip is to bring sports equipment up to the community. Many of the students have never seen broomball sticks.

As the trip winds down, the students’ relatives take their leave. Rachel E. Beardy tearfully says goodbye to her family. She says she had fun on the trip and encourages other students to get involved in sports.

After Ms. Beardy's family depart, Scott Vis and Sean Spenrath, both DFC faculty, remind the student that she can think of them as her other family.

For the staff of Dennis Franklin Cromarty, the trip offers an opportunity to understand the challenges their students face.

“It’s a reminder of where these students come from. Of how hard it is to try and get an education when you live in Thunder Bay and your parents are away,” says Ms. Angeconeb.

David Jackson is a freelance photographer covering stories near his home in Northwestern Ontario, and beyond.

Hate and hope in Thunder Bay: A city grapples with racism against indigenous people 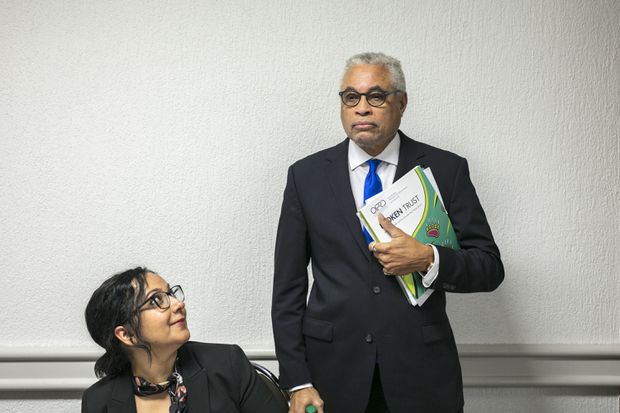