Days before she was about to fly home to Canada, Meenu Kanda was told her Air India flight from New Delhi to Toronto had been cancelled. After the federal government placed a ban on direct flights to and from India, Ms. Kanda was stranded in the midst of India’s devastating second wave of COVID-19 infections. It would be another four months before she would find a way back.

Ms. Kanda is one of many Canadian citizens and permanent residents of Indian origin who have had to take long and circuitous journeys home since late April, when Transport Canada issued a Notice to Airmen (NOTAM) restricting all commercial and private flights between the two countries. Those who wanted to return to Canada would have to travel via a third country. They would also need a negative RT-PCR test report from that third country. The restrictions were tentatively introduced for a month, subject to periodic reviews.

But five months later, the ban still stands. As Canada counts down to its Sept. 20 election, the country’s Indian diaspora is also looking anxiously at Sept. 21 – the date the travel ban is set to be reviewed.

Ms. Kanda, 36, travelled to India after her father passed away. When she wanted to get back to her home in Caledon, Ont., she found the travel ban kept getting extended. “I was getting desperate, I knew there had to be a way,” Ms. Kanda, a Canadian national, said. She connected with other stranded Indian-origin Canadians.

She flew from New Delhi to Doha and from there to Athens. It took 24 hours for her COVID-19 test report to come back in Athens. Not able to afford the €300 hotel room, she slept in the airport lounge. On Aug. 12, she finally arrived in Montreal, on home soil. In pre-pandemic times, a one-way ticket from India would cost around $1,000. Ms. Kanda paid $2,700.

“Travel is so uncertain, I don’t know when I will be able to see my mother next,” she said.

In November last year, Aditi Sheoran received a document called Confirmation of Permanent Residence, or COPR. It wasn’t until July that she was cleared to travel, but by then there were no direct flights to Canada.

In August this year, she took an eight-hour flight from Delhi to Paris, had a five-hour layover and then flew for 12 hours to Mexico. After waiting in Mexico for a day, she finally caught a flight to Toronto.

India is one of two countries, the other being Morocco, which currently has no direct flights to Canada. Ms. Sheoran, a lawyer based in Brampton, Ont., said singling out India is unfair. The highly transmissible Delta variant may have first been detected in India, but has now spread to more than 130 countries.

“Some of us aren’t travelling for leisure, we’re travelling because it’s important. The travel ban doesn’t serve much purpose. Those of us who have to travel are travelling anyway,” she said.

Ms. Sheoran’s experience is consistent with data from the Canada Border Services Agency. In May, the month after the travel ban, the number of Indian nationals entering Canada fell from more than 8,000 to 602. However, this figure more than tripled in June to more than 1,900.

“For the first month or so, nobody knew how to travel. People were still figuring things out. By May, we had figured out that it was possible to travel legally if you follow the rules and get tested in a transit country.”

A combination of streamlined testing, easier visa norms for Canadians and lax quarantine rules has made Mexico a popular transit point for Indians over the past five months. Other locations include Serbia, Ethiopia and the Maldives. Travel agents have managed to create and sell packages that include multiple flights, the cost of testing and hotel accommodation in transit countries.

“The average cost now is two to three times higher than the pre-pandemic cost, which used to be around $1,000. The highest package I’ve booked for someone has been $5,200. In 2019, this price would have been unthinkable,” Mr. Sagoo said.

This also has also created an opportunity cost for coming international students. The ban’s deadline being pushed from Aug. 21 to Sept. 21 means many international students from India won’t be able to join their cohorts for in-person classes. For many, this will be a second consecutive year of online learning, as classes began earlier this month.

While the testing requirement has complicated travel from India to Canada, those travelling to India have also been hit by the ban on direct flights. Nitin Rana, a Brampton resident, was worried about his parents’ trip to India in August. His father, 74, is immunocompromised because of a kidney condition.

“If it wasn’t necessary, we wouldn’t let him travel. Thankfully, my sister lives in England. So my parents quarantined at her house in London before leaving for India,” he said.

Maryse Durette, a spokesperson for Health Canada, told The Globe and Mail in an e-mail that India’s low rate of vaccination is among the causes for the travel ban. She cited the fact that India is still among the top countries for absolute number of cases reported. India is a long way down from its single-day peak of 400,000 cases in May. It is also far below the United States’ weekly average of 160,000 cases in August. However, the country still had a seven-day average of more than 42,000 cases at the end of August.

Ms. Durette added that Health Canada was continuing to monitor the situation in India and looking to safely lift the restrictions.

Ms. Kanda, who will be voting in the coming federal election, said the travel ban will weigh on her mind when she heads to the polls.

“I understand the need for travel restrictions, but they should have at least thought of citizens and permanent residents. Canada is our home, we should be able to get back easily.” 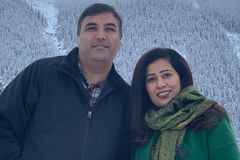 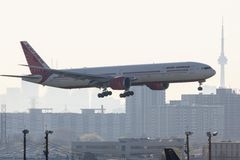