Evgeni Malkin scored his 400th career goal for the Pittsburgh Penguins in a 4-1 win over the Calgary Flames on Tuesday.

The centre joined Mario Lemieux (690), Sidney Crosby (451) and Jaromir Jagr (439) as the only players in franchise history to score 400-plus goals.

“Every goal is special,” the 33-year-old Russian said. “It’s a good number for sure. It’s a huge number, but I want more for sure.

“I hope I play five, six more years with Penguins and we see what’s going on after.”

Malkin returned to Pittsburgh’s lineup Tuesday after sitting out a pair of games because of illness.

“I don’t care how you get it. Four hundred goals is an awful lot of goals in this league,” Penguins head coach Mike Sullivan said.

“I think it’s a testament to the type of player that he is and what he’s accomplished in the time that he’s been here.

“I think he’s been one of the best players of his generation without a doubt.”

The Pens have been minus Crosby for 17 games since his Nov. 14 surgery on a core muscle injury. Pittsburgh is 10-4-3 without the captain this season.

Bryan Rust and John Marino each contributed a goal and an assist in Pittsburgh’s third straight win to open a three-game swing through Alberta and B.C.

Johnny Gaudreau countered for the Flames (18-14-4), who have lost back-to-back games following a seven-win streak.

“We’re generating enough offensively, but the thing you have to remember in this game is, it’s not what you make all the time. It’s what you leave.

“We left a little bit out there that they were able to take advantage of and cash.”

The Flames are 7-2-0 since Ward’s promotion from assistant to interim head coach.

Bill Peters resigned in November following accusations he directed racial slurs at a Nigerian-born player in the minor leagues a decade ago.

Penguins goaltender Tristan Jarry made 33 saves for his fifth win in six starts for Pittsburgh.

“He’s seeing the puck,” Sullivan said. “His rebound control is great. He plays the puck really well. Every aspect of his game, he’s locked in.”

Calgary’s Cam Talbot stopped 29 shots in the loss in his ninth start this season (3-6-0).

Trailing 1-0 and outshot 17-6 after the first period, the Penguins struck twice within two minutes starting at 12:13 of the second.

“There’s nothing really that I can think of that can prepare you for that,” Jarry said of two undefended skaters bearing down on him.

“I’ve had two in the last three games and I think every one I’ve played differently at this point.

“It’s just making sure I’m playing the shot and getting over there as quick as I can when they pass it.”

Forward Sam Bennett was back in Calgary’s lineup after 13 games sidelined with an upper-body injury.

Calgary is at home to the Montreal Canadiens on Thursday. The Penguins are in Edmonton to face the Oilers on Friday.

Rust’s goal was his third in four games and Gaudreau’s was his fourth in four . . . Pittsburgh improved to 2-0 against the Flames this season after a 3-2 OT win at home Nov. 25 . . . Atlanta Braves pitcher and Calgary-native Mike Soroka attended the game.

Calgary Flames have their mojo back after slogging through disappointment and chaos
December 13, 2019 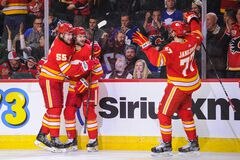