A man accused of killing his two children last fall made a brief court appearance today in Quebec City.

Michael Chicoine is charged with two counts of second-degree murder.

Chicoine is accused of killing his sons Olivier, 5, and Alex, 2, during the night of Oct. 10 to Oct. 11 at a home in Wendake, a Huron-Wendat First Nation territory near Quebec City.

The 30-year-old turned himself in to Quebec City police the same night.

He appeared via video from the Quebec City detention centre as Crown prosecutor Thomas Jacques said he has provided the bulk of the evidence to defence lawyer Pierre Gagnon.

Jacques says there is still some evidence that needs to be divulged, and he expects that to be done when the case returns to court on March 30. 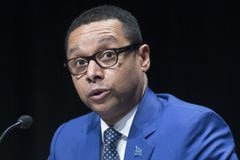 Mother of two boys found dead in Wendake, Que., says youth protection failed her family
Subscriber content
November 16, 2020
Quebec commission launches investigation into deaths of two boys in Wendake
Subscriber content
October 14, 2020
Report an error
Due to technical reasons, we have temporarily removed commenting from our articles. We hope to have this fixed soon. Thank you for your patience. If you are looking to give feedback on our new site, please send it along to feedback@globeandmail.com. If you want to write a letter to the editor, please forward to letters@globeandmail.com.
Comments are closed