When the Kentner family buried Barbara in July, 2017, they collected red prayer ties from those who attended her funeral, a traditional Anishinaabe custom that involves wrapping tobacco, or sema, in fabric as an offering to the Creator and spirits. Three and half years later, the family lit a sacred fire in an empty Thunder Bay parking lot for a ceremony and Barbara Kentner’s three sisters – Melissa, Connie and Cheryl – placed the red prayer ties in the fire as they prepared for the verdict against a young man accused of killing her.

“It’s time to let these go,” Melissa said after placing the ties in the fire.

Hours later, the family sat in a Thunder Bay courtroom as Superior Court Justice Helen Pierce delivered a guilty verdict against Brayden Bushby for the charge of manslaughter.

Brayden Bushby’s guilty verdict was a relief for Indigenous women, but it was also deeply imperfect

Justice Pierce told the court Monday afternoon she was satisfied the prosecution had proved beyond a reasonable doubt the elements required for a conviction, including Mr. Bushby’s admission that he threw the trailer hitch that struck Ms. Kentner in the stomach, and that the trailer hitch caused her small intestine to burst and that complications from the injury led to her death.

Mr. Bushby, now 21, was dressed in a black suit and tie, with his mother and grandparents seated behind him.

Ms. Kentner’s sisters sat with members of their extended family and supporters from Thunder Bay and Wabigoon Lake Ojibway Nation. Ms. Kentner was an Anishinaabe woman from Wabigoon Lake and mother to teenage daughter Serena.

Tears flowed as the family heard the verdict.

“I just started crying because I was just happy he was found guilty,” Melissa said after leaving the courtroom.

“A lot of people were doubting [the outcome].”

The Thunder Bay case was being closely watched by many across the country who felt Ms. Kentner’s death echoed the killings of Tina Fontaine in Manitoba and Colten Boushie in Saskatchewan. The men accused of killing 15-year-old Ms. Fontaine and 22-year-old Colten Boushie were both acquitted, sparking outrage across the country against a justice system that many say doesn’t value Indigenous lives.

The manslaughter trial of Mr. Bushby took place over four days in November.

Ms. Kentner died six months after she was struck by the trailer hitch on Jan. 28, 2017. Mr. Bushby was charged with second-degree murder and a trial by jury was scheduled for earlier this year in January.

The trial was delayed partly because of COVID-19 restrictions and in September, Crown attorney Andrew Sadler announced he was dropping the second-degree murder charge against Mr. Bushby and proceeding with a trial for manslaughter in front of a judge only. He reasoned jury selection and seating could not proceed safely because of the pandemic and delaying the prosecution any further was not in the best interest of the public.

Preliminary-hearing testimonies from Jordan Crupi and Nathan Antoniszyn, the two passengers in the vehicle with Mr. Bushby that night, paint a picture of a young man who spent the day drinking whiskey and ice fishing with friends before cruising the streets of Thunder Bay to “yell at hookers.”

At one point, Mr. Bushby jumped out of the car and returned with a trailer hitch. His friends testified Mr. Bushby then sat on the opened window sill of the front passenger seat and hurled the weighted trailer hitch at Barbara and Melissa, who were walking down a street. He then laughed about it.

Both women said they heard him yell, “I got one!” as the vehicle sped away.

The trailer hitch hit Barbara in the stomach and ruptured her small intestine. She required emergency surgery to repair it. Barbara, who had also been diagnosed with end-stage liver disease, suffered from complications after the surgery and died in a Thunder Bay hospice.

The forensic pathologist who performed the autopsy said while her liver disease was a contributing factor to her death, Barbara died from complications of the blunt force trauma, including pneumonia and peritonitis, and would not have died when she did had she not been injured.

During the trial however, Mr. Bushby’s defence counsel George Joseph questioned pathologist Toby Rose’s findings, suggesting that Barbara’s death was imminent because of her liver disease. Mr. Joseph also argued that Melissa delayed taking her sister to the emergency department because it violated Melissa’s probation curfew orders, ultimately leading to the complications of her injury.

In her decision, Justice Pierce said any question of the delay in Barbara getting hospital treatment was speculative and that the timing of the late-night attack could have prevented immediate treatment. Justice Pierce said she was satisfied with Barbara’s previous medical history and postmortem report from the forensic pathologist who determined she would not have died if she hadn’t been injured.

The defence also told the court that the attack on Ms. Kentner was not racially motivated.

For decades, Indigenous people in Thunder Bay have shared their experiences of having items like garbage and pop cans thrown at them from people driving by in vehicles, as they walk down city streets, often in busy, public places and in broad daylight.

For many, Barbara Kentner’s death is an example of the blatant and systemic racism that plays out on the streets of Thunder Bay.

The attack against Ms. Kentner heightened racial tensions in Thunder Bay during a time when families were testifying in hearings for the National Inquiry into Missing and Murdered Indigenous Women and Girls and when the city’s police and its board were being investigated for systemic racism against Indigenous people. The reports from the Office of the Independent Police Review Director and the Ontario Civilian Police Commission both concluded systemic racism was engrained among the ranks of both the police service and board.

Outside the courthouse after the verdict, supporters hugged the Kentner sisters and each other, with some semblance of relief and justice.

While Melissa says she is happy with the verdict, she’s furious Mr. Bushby continues to walk free and that he will get to spend Christmas with his family.

Mr. Bushby was remanded until Feb. 9 for sentencing and remains out of custody on conditions. 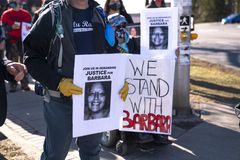 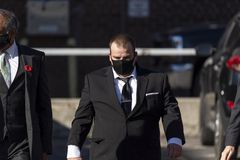 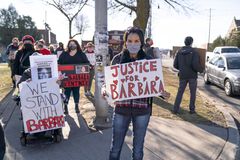