Nearly three years after he deliberately ran down pedestrians on Toronto’s busy Yonge Street, killing 10 people and injuring many others, a 28-year-old man has been convicted of carrying out the deadliest mass killing in the city’s history.

After a seven-week trial held virtually last fall as a result of the COVID-19 pandemic, a judge on Wednesday found Alek Minassian guilty on 10 charges of first-degree murder and 16 of attempted murder.

As she delivered her ruling, Superior Court Justice Anne Molloy said that she would avoid using the killer’s name, referring to him instead as “John Doe.”

Notoriety, she stressed, “is exactly what this man sought.”

She took a moment to read the names of each victim, carefully noting the lives lost and the catastrophic injuries suffered on April 23, 2018, in the attack, which he admitted planning and carrying out.

His defence, as argued by lawyer Boris Bytensky, was that his autism spectrum disorder (ASD) made him unable to understand on a rational level that what he was doing was wrong. As a result, he said, his client should be found not criminally responsible (NCR).

The not criminally responsible defence has traditionally applied to people with psychosis.

In her ruling, Justice Molloy concluded that the choice to carry out the attack was conscious and deliberate.

“He knew death was irreversible. He knew their families would grieve. At various times, during his assessments by various experts, he described his actions as being ‘devastating,’ ‘despicable,’ ‘shocking,’ ‘morally terrible,’ ‘a horrible thing’ and ‘irredeemable,’” she said of the killer. “He knew it was morally wrong by society’s standards, and contrary to everything he’d been taught about right and wrong. He then made a choice. He chose to commit the crimes anyway, because it was what he really wanted to do.”

Thousands of people tuned in to watch the verdict online – a reminder of how deeply the attack affected the city. The mayor and police chief issued statements afterward, expressing solidarity with the victims and their families.

The case was also high-profile because of the attempt to use autism as a defence, which drew ire from the autism community.

Mr. Bytensky stressed throughout the trial that the defence did not represent a generalized claim about people with ASD, who are more likely to be victims of violence than perpetrators. Justice Molloy, too, emphasized during the proceedings that autism itself was not on trial.

The defence relied heavily on the testimony of Alexander Westphal, a Yale University professor with expertise in ASD. In her ruling, Justice Molloy rejected much of his findings, calling them selective. She said that he at times “appeared to be more of an advocate than an objective expert witness.”

She said she was convinced ASD could qualify as a “mental disorder” eligible for a defence of not criminally responsible under the Criminal Code, but added that this does not “say anything at all about any connection between ASD and criminality,” and stressed that every case is different. This case, she found, did not meet the requirements for an NCR defence.

The van attack case also highlighted the dangers of misogyny and online radicalization after it was revealed that the assailant had been reading and fantasizing about mass murders since high school. The court heard the killer took particular interest in the incel (short for involuntarily celibate) subculture, an internet-based network of misogynistic men who blame women for their inability to have sexual relationships.

Minutes before the attack, he posted a message to Facebook that made specific reference to a U.S. mass killer who brought “incels” into the public eye by killing six people and then himself in Santa Barbara, Calif., in May, 2014.

And though Mr. Minassian gave differing explanations of his motive after the attack, he told psychiatrists he felt “happy” with how it went, and that he wished there were more female victims.

The court was told that on the morning of April 23, 2018, the killer asked his father for a ride to Woodbridge, where he said he planned to meet a friend for coffee at a bookstore. After his dad pulled away, he walked four kilometres to a Ryder rental car outlet to pick up a cargo van he’d booked three weeks earlier.

According to an agreed statement of fact, he drove southeast toward Toronto, reaching Yonge Street at Finch Avenue West just before 1:30 p.m. As he watched clusters of pedestrians crossing the road there, he decided this was where his “mission” would begin.

He accelerated into the crowd. For 2.57 kilometres, he weaved on and off the sidewalk, plowing into and over people, and stopping only after a drink held by his final victim splashed on his windshield, obstructing his view.

On a side street, Poyntz Avenue, Toronto Police Constable Ken Lam yelled at him to get down. He used his wallet to intimate having a gun, saying later that he had hoped the officer would shoot him. When that didn’t happen, he surrendered and was arrested.

In her ruling on Wednesday, Justice Molloy said she also wished to “acknowledge the true heroes of that day.”

Among the many first responders and the people who comforted those who lay injured and dying, she also thanked “those individuals who chased after the van in an attempt to stop it, shouted out warnings to others who might otherwise have become victims and particularly those who, without regard to their own safety, attempted to reach through the open window of the moving van and wrest control away from Mr. Doe.”

The case will return to court on March 18 to schedule sentencing proceedings.

Mr. Bytensky said he had not yet discussed any plans to appeal with his client. Both he and prosecutor Joseph Callaghan expressed gratitude to Justice Malloy for her careful and respectful analysis.

“Based on all the evidence in this case, this was the fair and just result,” Mr. Callaghan said at the courthouse, where some victims and family members had gathered to watch the verdict.

Cathy Riddell, one of the survivors, said she felt “relieved and grateful” her attacker was found guilty.

She was in hospital for months after the attack, and had no memory of what happened. She learned details after the agreed statement of facts was entered into evidence at the beginning of the trial.

“Since that day, it has been very hard to absorb. It’s like I’m going through trauma now that I didn’t go through before,” she said. But with the trial over and a guilty verdict entered, she said she “probably will sleep tonight, for the first time in a while.” 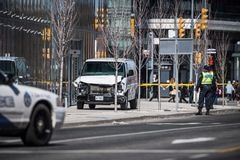