Marineland has applied for permits to sell five beluga whales to a U.S. facility that plans to use them for research and breeding, which is currently banned in Canada.

The Niagara Falls, Ont., tourist attraction has struck a deal with Mystic Aquarium in Connecticut that would see the mammals move there in January 2020.

“We welcome the opportunity to support Mystic Aquarium’s world-class research and are confident that the series of research studies they intend to undertake will significantly improve humanity’s understanding of this species, and positively promote conservation of wild beluga populations,” Marineland said in a statement.

Neither Marineland nor Mystic Aquarium provided financial details of the deal.

Exporting and importing captive whales is illegal in Canada under two new laws passed in June, but there are two exceptions: for research purposes or if it is in the best interest of the animals. The legislation also bans whale, dolphin and porpoise captivity, as well as breeding of whales. Marineland, however, was grandfathered in the laws.

The move of the five Marineland whales to the U.S. requires two permits from the federal government.

A new law banned whale, dolphin and porpoise captivity, but grandfathered in the two facilities in the country, which includes Marineland, where they are already being kept.

A spokeswoman for Fisheries and Oceans Canada said the park has been issued one permit to export the animals under the Convention on International Trade in Endangered Species of Wild Fauna and Flora. But she said Marineland has yet to apply for the second permit, which must be approved by the minister.

Marineland is also in the process of moving two belugas to a facility in Spain, which was approved by the federal government in August.

The park’s president, Marie Holer, said in an affidavit filed with the U.S. federal authority – the National Oceanic and Atmospheric Administration – that the move of the five belugas is being done in part to increase space for its remaining whales. As of the March 4 affidavit, Holer said Marineland had 54 belugas.

“Pollution of all kinds – noise, plastic, chemicals – is ruining habitat,” Romano said in an e-mail. “We need to know how to detect and respond. That becomes possible and effective when we better understand whales’ immune systems, hearing, diving, and other everyday behaviours. Whales in the aquarium show us this information in a controlled setting so we can use it in the wild.”

All five whales were born at Marineland to belugas that were captured in the waters off the eastern coast of Russia.

“It is estimated that a maximum of two calves would be born during the five-year permit, as only two of the belugas proposed for import are adults,” Mystic wrote in its import application to the NOAA.

Mystic and Georgia Aquarium will split ownership of the calves under a breeding loan agreement between the two facilities.

“Incidental to the research, display of the beluga whales in the Arctic Coast habitat at Mystic Aquarium will occur,” Mystic wrote in its application.

The American public has until Dec. 2 to comment on the possible importation of the whales. 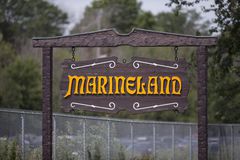