Saskatchewan’s premier wants an explanation for why an Easter drive-in church service was prohibited over the weekend.

Scott Moe’s office said the Saskatchewan Health Authority has been asked to account for its decision, as drive-in events seem to maintain safe physical distancing.

“While we must remain vigilant in observing physical distancing, we should also encourage innovative and unique ideas that support the ability of Saskatchewan residents to pull together while staying apart,” Moe’s office said in a statement Tuesday.

Other churches across the country have held drive-in services.

Moe’s office noted that hundreds of people were allowed to pay tribute Monday to the family of Edmonton Oilers hockey player Colby Cave, who died of a brain bleed in Toronto. Vehicles stretching several kilometres lined a highway as his family returned home to Battleford, northwest of Saskatoon.

Last month, the province issued a public health order limiting gatherings to no more than 10 people, one of several restrictions due to the COVID-19 pandemic.

Jordan Gadsby, lead pastor of the Nipawin Apostolic Church, said people were invited to an arena parking lot where they could tune into an Easter Sunday church service from inside their vehicles.

“We thought it would be worthwhile to try and do something a little bit creative and a little bit different,” he said.

Gadsby said people in the community were excited about the event, which would have met physical-distancing requirements because nobody needed to step outside a vehicle or roll down windows.

“It’s good for people to have something to look forward to, even if we’re not really in the same space,” he said.

“When everyone’s stuck at home for long periods of time, it takes a toll on our mental health and our spiritual health.”

On Saturday, he said he was called by a public health official who explained that complaints had been made about the drive-in service.

“I believe the wording was that you’re strongly recommended not to do this and we consider this to be a mass gathering, which goes against the public health guidelines,” Gadsby said.

He told the official that worshippers wouldn’t have physical contact, but there was still concern people would leave their vehicles and visit with one another.

To avoid placing the church and anyone attending at risk of being fined, the church decided to cancel, Gadsby said.

“Having to cancel this event was one of the most disappointing and discouraging moments of leadership for us.”

During a press conference Tuesday, health authority CEO Scott Livingstone said the church didn’t have a plan for keeping people inside their vehicles during the service.

Livingstone said he would follow up with public health officials, but added he believes the drive-in service presented different circumstances than the vehicular rally for the Cave family.

“A spontaneous event that we’re not aware of is quite different than an event that was planned, advertised and that we received public concerns about,” he said.

The Calgary-based Justice Centre for Constitutional Freedoms said it has sent a letter to the health authority expressing concern about the drive-in service being declared a mass gathering.

Jay Cameron, a litigation manager with the justice centre, said he believes what happened to the church wasn’t justified, because no health risk was posed by people staying inside their own vehicles.

“People are longing for a sense of community during the coronavirus outbreak and they still have a right of freedom of association and religion as protected by the Charter of Rights and Freedoms.”

Cameron said charter rights should not be infringed on based upon hypothetical situations, such as people possibly leaving their vehicles.

He said he wants the health authority to admit it made a mistake and that it won’t be repeated; otherwise, the centre will consider legal action. 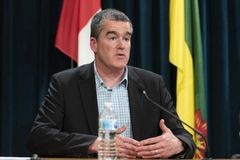