It was March, 2005, and Prime Minister Paul Martin was out to make some political mischief. He appointed nine senators, six of whom agreed to sit as members of the ruling Liberal Party, but he named three others as opposition representatives, including a New Democrat who was immediately renounced by her own party.

The two remaining appointees decided to sit as Progressive Conservatives, even though the party had disappeared two years earlier with the creation of the Conservative Party of Canada under Stephen Harper. One of the new senators was Elaine McCoy, a onetime Alberta cabinet minister, a Red Tory who was clearly not a fan of Mr. Harper’s brand of right-wing politics.

Mr. Harper lashed out, calling Mr. Martin’s appointments insulting and “intellectually dishonest” because there was no federal PC Party any more and being a Progressive Conservative was just “a euphemism for people who support the Liberal Party federally.”

The new senator was unfazed, noting that her decision was “a personal choice” and that the Progressive Conservative label reflected fiscally conservative and socially progressive beliefs. Ms. McCoy later told an interviewer that joining the Harper Conservatives “would have destroyed my soul.”

Ms. McCoy, who died on Dec. 29 in Ottawa at the age of 74 after a long struggle with pulmonary illness, remained true to that sense of independence until the end, refusing to have her views easily categorized and paying the political price for her sometimes outspoken outlook. “She was an authentic Alberta maverick,” said Paula Simons, a fellow Alberta senator.

Elaine McCoy was born in Brandon, Man., on March 7, 1946, the daughter of Jack McCoy, a mechanic with the Royal Canadian Air Force, and Jean Hope McCoy. She had an older brother, William. As the daughter of a military family, she moved frequently in Canada and Britain. Ms. McCoy earned a BA in English and a law degree at University of Alberta and subsequently worked as a lawyer for the Alberta Energy and Utilities Board and for TransAlta Corp.

As her legal career progressed, Ms. McCoy met then-Alberta premier Peter Lougheed, becoming a constituency volunteer and quickly embracing his approach to politics, including his pragmatic, centre-right approach to the role of government in the economy.

When Mr. Lougheed stepped down in 1985, he asked Ms. McCoy to stand for the Progressive Conservatives in his riding of Calgary West in the 1986 election. She won. Despite being a rookie, she was named to cabinet by premier Don Getty as minister of consumer and corporate affairs and minister for women’s issues.

After being re-elected in 1989, she became labour minister, where she clashed at times with union leaders but pushed for a rise in the minimum wage. She defended gay rights and took the lead in promoting the Lake Louise Declaration, the province’s action plan to combat violence against women. As minister responsible for human rights, she launched an inquiry by Alberta’s human rights commission into the Aryan Nations, a white supremacist group.

The Getty years were particularly harsh in Alberta as oil boom turned to bust, as it always does, and the province found itself in dire economic straits. Nancy Betkowski (now Nancy MacBeth), who sat in cabinet with Ms. McCoy, remembers her colleague as being “as sharp as can be” with a “delightful sense of humour.”

“A number of us were sitting around one day and Elaine came into the room and said she had figured out how to eliminate the deficit,” Ms. MacBeth recalled. “She said we just have to eliminate the Department of Health. I was minister of health.”

Scott Tannas, a fellow senator from Alberta, recalls meeting Ms. McCoy in the late 1980s when he was a young consultant pleading for a government bailout for a failing airline. “She was at the height of her career. … She had a Chanel suit. Her hair was perfect. Her eyes were unforgettable. She smoked those long cigarettes incessantly. She kind of reminded me of Eartha Kitt from Batman. She had this powerful presence and she was super smart.” He didn’t get the grant.

After Mr. Getty stepped down in 1982, Ms. McCoy was the first to announce her candidacy to succeed him as the provincial PC leader.

She called for a tough series of measures to handle the debt crisis, including liquidation of the Heritage Trust Fund and raising $1.5-billion a year in new taxes, which she preferred to call “user fees.” She also proposed slashing spending on roads and other capital projects.

The Edmonton Journal praised her platform, saying it was “so substantial, it cannot be ignored.” But while the newspaper lauded Ms. McCoy for her “boldness,” it wondered how successful she would be in selling it.

They were right to wonder. By the time the first round of voting occurred, Ms. McCoy came in eighth among nine candidates in a race that was ultimately won by Ralph Klein. Her straight talk about higher taxes and lower spending was too much for her fellow Alberta Conservatives. “People who speak very bluntly about these things always do badly” in Alberta politics, said Graham Thomson, an Edmonton-based columnist.

Ms. McCoy was excluded from the Klein cabinet and didn’t run in the 1993 election yet she remained active in public affairs. In 1995, she chaired a provincial task force that studied the idea of “right-to-work,” legislation that would ensure employees couldn’t be forced to join a union or pay dues as a condition of employment, a measure despised by unions but supported by the right. The task force ended up recommending against any such change.

Ms. McCoy also helped found the Famous 5 Foundation, dedicated to honouring the legacy of the five Alberta suffragettes who went to court in the “persons” case and argued successfully that women should be considered “persons” under the British North America Act and be eligible for appointment to the Senate. A statue in their honour was later erected on Parliament Hill.

In the Senate, Ms. McCoy developed a reputation for her independent approach.

“Throughout her career, she’s been a lone voice on a number of things,” Mr. Tannas said. “She’s never been scared to be seen as quirky or offbeat with her views.”

Lowell Murray, who sat with her as one of the Chamber’s last two Progressive Conservatives, until retiring in 2011, said she was always plain-spoken, well-informed and articulate. “I never saw her use a text during an intervention and she spoke in paragraphs.”

In 2016, after the Trudeau government announced its Senate reform plan, Ms. McCoy was one of the founding members of the Independent Senators Group and became its facilitator. But as the group grew and Trudeau appointees became more dominant, she became uncomfortable with the group and moved to the more conservative Canadian Senators Group in 2019.

Although Ms. McCoy considered herself an environmentalist, she was an ardent supporter of the Alberta oil industry and fought doggedly against legislation imposing a ban on large oil tankers off the northern British Columbia coast.

Ms. McCoy insisted that banning tanker traffic was “shooting at the wrong duck,” according to her colleague Ms. Simons, arguing that the authorities had failed to properly defend the coast from smaller spills.

“She went out of her way to hire her own independent maritime law experts to analyze the bill … and she tried really hard to find some sort of amendment that would protect the coast while not trespassing on Alberta’s future potential to build a pipeline,” Ms. Simons said. The effort failed.

As her health deteriorated, Ms. McCoy worked valiantly to remain active in Senate deliberations. She used a walker and was occasionally seen with an oxygen tank in the halls of Parliament. Even giving a speech on the Senate floor became difficult.

Liberal Senator Jim Munson said that when Ms. McCoy intervened in a Senate debate she did so carefully and was well prepared. “She brought the voice of Alberta to the Senate and she knew what she was talking about.”

In 1998, Ms. McCoy married Miles Patterson, a Calgary lawyer who died in 2011. They had no children. Mr. Patterson had four children from a previous marriage.

Six days after Ms. McCoy’s death, her mother, Jean, died at the age of 101. Ms. McCoy leaves her brother, William. 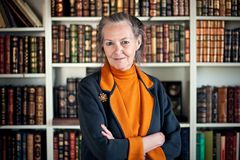