The RCMP arrested the chief financial officer of Huawei Technologies on Dec. 1, 2018, after the United States Justice Department requested her extradition on a charge of fraud. Soon after, China arrested two Canadians, Michael Kovrig and Michael Spavor. They have been detained ever since, while Ms. Meng has been free on bail since shortly after her arrest.

Ms. Meng’s defence team, led by Vancouver lawyer Richard Peck, is trying to have the extradition request thrown out as an abuse of the Canadian judicial system. It is focusing on an assertion by then-U.S. president Donald Trump 10 days after her arrest that he would personally intervene in the prosecution of Ms. Meng if he felt it would advance U.S. trade or security interests. Those comments suggest the U.S. government was using Ms. Meng as a “bargaining chip,” Mr. Peck told Associate Chief Justice Heather Holmes.

Mr. Peck said Mr. Trudeau, in a comment during a media interview on Dec. 19, 2019, had reinforced the impression left by Mr. Trump. Although the Prime Minister had previously insisted that commercial interests not be mixed with the imprisonment of foreign citizens, and that the rule of law be at the forefront, he now altered his position.

Mr. Peck quoted the Prime Minister as saying: “We’ve said that the United States should not sign a final and complete agreement with China that does not settle the question of Meng Wanzhou and the two Canadians.” Mr. Trudeau made the comment in an interview broadcast on the French-language network TVA when asked about a tentative trade deal between the U.S. and China and whether it could help bring Mr. Kovrig and Mr. Spavor home.

This comment, Mr. Peck said, reinforced an “abhorrent” statement from Mr. Trump on Dec. 11, 2018, in which he said, “If I think it’s good for what will certainly be the largest trade deal ever made, which is a very important thing, what’s good for national security, I would certainly intervene if I thought it was necessary.”

Referring to the Trump comment, Mr. Peck said: “With that utterance, Ms. Meng became a bargaining chip, a pawn in this economic contest between two superpowers.”

He said it appears to be the first time that the head of a state requesting extradition has publicly articulated “a willingness, and indeed an intent,” to intervene in extradition proceedings for any reason. He added that Joe Biden’s government has done nothing to disavow the impression left by Mr. Trump.

Another of Ms. Meng’s lawyers, Isabel Schurman of Montreal, elaborated on the point about Mr. Trudeau. “The comments by one head of state were now being adopted by our Prime Minister even though they were shocking, destructive of the rule of law, offensive to justice and fair play and offensive to the rule prohibiting the use of the legal process for extrinsic or illegal purposes,” she told Associate Chief Justice Holmes.

Robert Frater, a lawyer representing the Canadian Justice Department, which is supporting the extradition request, told the court that Mr. Trump’s comments lacked substance. “Looked at objectively, there is nothing to them.”

He suggested Ms. Meng’s claim that Mr. Trump’s comments created an abuse of process is moot anyway because the trade deal was done, there was no presidential intervention and Mr. Trump is no longer president. He said that the Meng legal team, realizing its arguments were thin, tried to shift the blame to Mr. Biden and to Mr. Trudeau. But there are no facts to suggest that either leader views Ms. Meng as a bargaining chip, he said.

Mr. Frater said the Prime Minister has “always tried to make a distinction between this case and any other political consideration. The attempt to shift the blame at the end of the game is not on here.”

The U.S. alleges that Ms. Meng lied to banks about her company’s conduct in an attempt to evade U.S. sanctions against Iran. Mr. Peck argued that Huawei Technologies, one of the world’s biggest telecommunications company, is perceived as a threat to U.S. economic dominance in the telecommunications sector.

Ms. Meng’s legal team urged Associate Chief Justice Holmes to consider a 2001 case known as Cobb in which the Supreme Court of Canada dismissed a U.S. extradition request after a U.S. judge promised to give the maximum penalty and a prosecutor warned of the danger of being raped in jail, as a consequence of fighting extradition.

Meng Wanzhou in talks with U.S. Justice Department to allow her to return to China
December 4, 2020 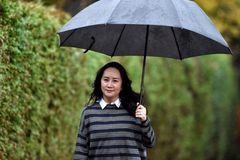 Dec. 7: ‘When Michael Kovrig and Michael Spavor are on a plane, Meng Wanzhou also gets on a plane.’ Readers react as U.S. in talks to resolve charges, plus other letters to the editor
February 3, 2021 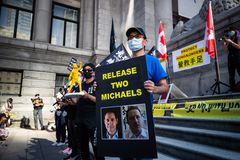