Another wave of public sexual-assault and harassment accusations is sweeping Quebec, and this time hundreds of those speaking up are naming names and engaging lawyers.

Since the start of July, Juripop, Quebec’s low-cost legal counselling service that offers free advice to victims of sexual harassment and abuse, has opened 450 files growing from scores of denunciations made over social media this month.

The accusations, which have often appeared anonymously and have not yet resulted in any criminal charges let alone convictions, have targeted high-profile politicians and superstar entertainers but also little-known people including teachers and massage therapists.

The wave started in early July with an Instagram account that urged people to denounce YouTube influencers and tattoo artists accused of abusing people. Before long, the scope expanded to include the Ubisoft video game giant, Bloc Québécois Leader Yves-François Blanchet, visual artist Jon Rafman and some of the biggest stars of Quebec entertainment, such as television personality Maripier Morin.

A steady stream of apologies, denials, cancelled contracts and bookings, and defamation cease-and-desist letters has followed. The complaints have spread to several social-media platforms and last weekend people took to the streets with protests across the province.

“It started very grassroots and out of the blue,” said Sophie Gagnon, a lawyer and executive director of Juripop. “At this stage, it’s hard to say if this is a good or bad thing. On one hand, people are losing their reputations, losing jobs, because of allegations on social media. On the other hand, some people will find justice and may force a cultural change.”

In one of the early revelations, singer Safia Nolin described a 2018 encounter in a Montreal bar with Ms. Morin where the TV and social-media star made sexually provocative comments, stroked her and bit her on the thigh hard enough to bruise her. Ms. Morin apologized to Ms. Nolin for her behaviour shortly after the encounter and again early this month when Ms. Nolin made it public.

On July 14, a Facebook page hosting dozens of allegations, called Hyènes en jupons (Hyenas in Petticoats), published an anonymous assertion alleging that Mr. Blanchet had, in 1999, forced a woman into a sexual encounter in a Montreal bar while he was working as manager for Quebec rocker Éric Lapointe.

Mr. Blanchet has vehemently denied the accusation and threatened legal action. He told reporters in Ottawa this week that he thinks the public believes him, so he may not follow through with a lawsuit.

The anonymous people behind the Hyènes en jupons page said this week that they have received numerous notices of intent to sue for defamation. The page was removed and restored twice this week and was down again Friday.

Ms. Gagnon said dozens of the people who reached out to her agency were caught off guard after they received notices that they might be sued for defamation after publishing their accounts.

This month, Yannis Mallat, the managing director of the Canadian division of France’s Ubisoft Entertainment SA, one of the world’s largest producers of video games, resigned amid sexual-harassment allegations against several Montreal-based employees. Quebec managing director Andrée Cossette resigned this week but said in an online post that her departure was not related to the harassment allegations.

In one of the most recent cases to come to light, the Musée d’art contemporain de Montréal suspended Mr. Rafman’s exhibit this week after several women accused him of coercing them into sex, often while on dates. Mr. Rafman issued a statement Thursday expressing regret that the encounters, which he considered consensual, had caused distress.

But the large majority of the incidents denounced on social media involve people who are far less famous. Ms. Gagnon said only about 20 per cent of the files that have come to Juripop involve players in Quebec’s media, arts and entertainment sectors. The balance included medical professionals, teachers, professors, students, work colleagues, bosses, relatives and onetime romantic partners.

Julie Lalonde, a women’s-rights advocate based in Ottawa and franco-Ontarian who follows Quebec culture, said the sheer number of disclosures crossing so many sectors is remarkable, along with the fact that the wave of cases is barely registering outside the province.

“Some of these cases should be Ghomeshi-level scandals but most people outside Quebec have no clue they are going on,” she said, referring to the 2014 sexual-assault accusations and subsequent trial and acquittal of former CBC radio host Jian Ghomeshi.

Ms. Lalonde said she wishes activists in the rest of Canada “brought the energy Quebec activists do” to combating sexual violence and exploitation. “No other place in Canada would have taken to the streets during a pandemic to denounce rape culture,” she said.

“During the Ghomeshi and #MeToo years, there were so many opportunities for Canadian feminists to take to the streets and demand change and those opportunities were never seized.”

Quebec’s July wave of allegations is the third time in recent years that a social-media movement of denunciation has taken hold in the province. Starting in 2014, a series of survivors reported abuse under a hashtag #beenrapedneverreported. In 2017, Quebeckers joined in with the #MeToo movement, which resulted in separate criminal sexual-assault cases against Just for Laughs founder Gilbert Rozon and entertainer Éric Salvail. Both cases are still before the courts.

Ms. Gagnon said the previous waves of denunciation concentrated more on survivors’ stories rather than naming aggressors. “One thing this shows is that there is still a very strong stigma that silences people, and it takes a wave of solidarity for people to pick up the phone,” she said. “It’s not normal that people don’t otherwise feel safe to denounce.”

It also points to the ongoing power imbalance between people who perpetrate sexual violence and survivors, she said, pointing to the case of Ms. Nolin and Ms. Morin as a prime example.

Ms. Morin, an occasional model who was formerly married to onetime Montreal Canadien Brandon Prust, has faced negative media coverage and lost endorsement deals, but also received a wave of support from fans including a petition with 100,000 signatures.

Ms. Nolin, a lesbian with brash language and style and an Algerian father, was a frequent target of racism, mockery and abuse even before the revelations. She has received support from music-industry colleagues since coming forward but has also been inundated with hateful and threatening comments. 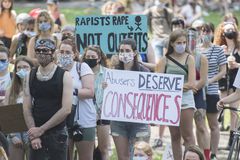 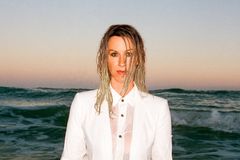 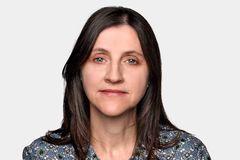