Rescue workers continued the painstaking search for survivors amid the rubble of a collapsed Miami-area condominium tower, as an investigation begins into what caused the four-decade-old building to crumble.

Along with an examination of maintenance shortcomings, that will likely include a focus on the construction of the Champlain Towers South – which was spearheaded by a Canadian lawyer and businessman, Nathan Reiber, for whom the project was a major foray into Florida real estate.

As of Sunday, nine people have been confirmed dead and more than 150 are missing. Authorities have collected DNA samples from family members of the missing to aid with identification.

Global Affairs Canada said at least four Canadian citizens are unaccounted for after the collapse, affecting three different families. They did not release the names of the individuals, but a spokesperson said Canadian consular officials in Miami are in contact with local authorities. 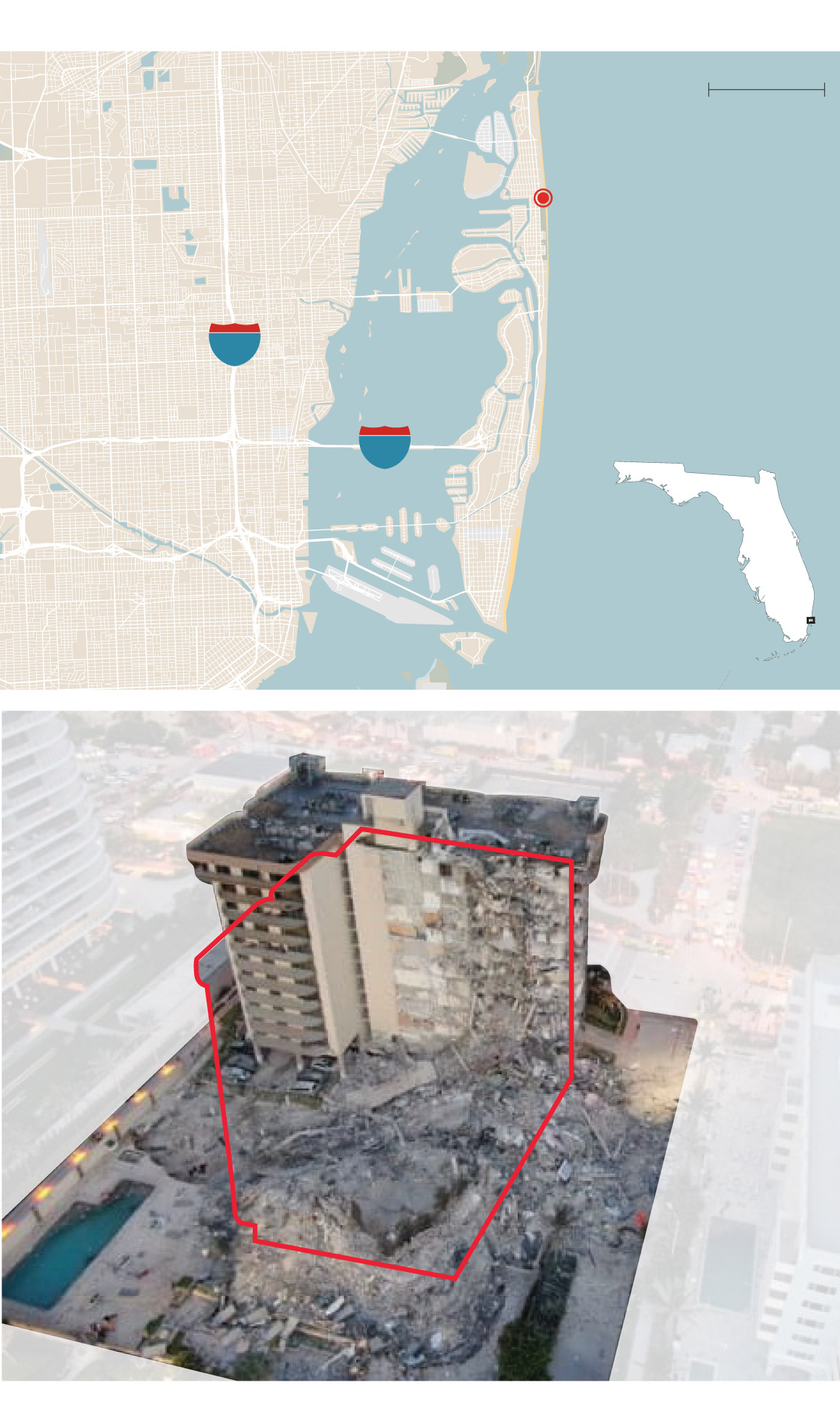 Hope is dwindling for family members, as nobody has been found alive within the wreckage since the immediate hours after the building fell last Thursday. Relatives, who have been kept from the site, have been frustrated with what they say has been a slow recovery effort.

“My daughter is 26 years old, in perfect health. She could make it out of there,” one mother told rescuers during a weekend meeting with family members. A video of the meeting was posted by Instagram user Abigail Pereira.

People moaned and wept as Miami-Dade Assistant Fire Chief Raide Jadallah explained why he could not answer their repeated questions about how many victims they had found.

“It’s not necessarily that we’re finding victims, OK? We’re finding human remains,” the official said, according to the video.

But even as the search continues, authorities are already looking at what may have caused the disaster.

Late Friday, town officials in Surfside Florida released a 2018 structural engineering report that had identified a “major error” with part of the design around the pool deck, as well as “abundant” cracking in the parking garage’s concrete columns.

The report was prepared by Morabito Consultants for the condo association, ahead of a mandated recertification process. In this Florida county, buildings must be shown to be structurally safe after reaching 40 years of age.

Evan Bentz, a professor of civil engineering at the University of Toronto, said that from the documents he’s seen so far – including the 2018 report – nothing explains what could cause the collapse.

“I read that document and it is typical for a structure of that age to have the problems that this project had prior to collapse,” he said.

“These are all important issues that need to be fixed. But what the report didn’t say is that there were problems of sufficient magnitude to threaten the safety of the entire building.”

Prof. Bentz says ultimately there are four reasons why the structure could have failed: a mistake with the original design, a problem with the materials, an issue with construction or poor maintenance.

“Usually when there’s an engineering failure to this extent – and this is on the same scale as an airplane disaster – it’s often the case that there’s more than one cause,” he said.

The aftermath of the building’s collapse has brought attention to Mr. Reiber, the Canadian who was the most prominent of its developers.

Mr. Reiber, who died in 2014 at the age of 86, was born in Poland and raised in Montreal. After earning his law degree, he spent the bulk of his career in Toronto, before moving to Florida in the early 1980s.

As recent U.S. media reports have noted, Mr. Reiber faced significant legal and ethical troubles around the time of his move, including allegations of tax evasion related to previous business ventures. In 1984, he was allowed to resign from the Law Society of Upper Canada after failing to co-operate with an investigation into income-tax charges against him.

Those battles continued well into his time in Florida. In 1999, he won a Canadian tax-court appeal involving a 1974 assessment related to his involvement in the buying and selling of luxury boats, despite the judge in the appeals case calling the manner of the transaction “professionally and ethically bereft.”

But with the Champlain Towers as a springboard, along with other new developments and apartment-to-condominium conversions, Mr. Reiber also successfully established himself as a Miami-era business-community leader and philanthropist.

In a glowing Miami Herald obituary after his death, Mr. Reiber was described as a family man with a sharp business sense who never lost touch with his immigrant roots. It described his role as a board member or benefactor for an array of charities, including those focused on health care and the arts, and noted that he addressed NATO while serving as executive vice-president of the Jewish Institute of National Security Affairs.

Mr. Reiber was not the only Canadian who was involved in the Champlain Towers’ development. Another now-deceased Toronto businessman, Nathan Goldlist, was listed as president of the complex’s management group during its early days.

Details of the Canadians’ respective roles are now difficult to discern. Attempts to reach surviving family members of Mr. Reiber and Mr. Goldlist on Sunday were unsuccessful.

However, it appears that the Canadian developers’ involvement in Champlain Towers, as well as their undertaking of new projects in Florida, ended many years ago. A corporate listing shows that Mr. Reiber’s construction company, Nattel Construction Inc., was dissolved in 1999.

According to Donna DiMaggio Berger, a lawyer representing the condo association, on the original declaration of condominiums, two development companies are listed: Sannat Investments Inc. and CAN-FLA Developments Inc.

John Pistorino, a prominent structural engineer in Miami, who wrote the region’s 40-year recertification program, said he has been retained to investigate the cause of the collapse.

Mr. Pistorino designed the recertification process as a young engineer, following the collapse of a federal building in downtown Miami in 1974, which left seven people dead.

“The concrete was compromised because the steel was corroding inside of it. No one fixed it or took care of it. It was a little over 30 years old,” he said. A key pillar of the recertification program was that a building needs to be constantly maintained.

Miami has an aggressive climate, he said. The air is full of salt from the ocean and that salt attacks concrete.

Mr. Pistorino estimates it may take three months to determine the cause of the collapse. He and his team will be looking at any available documentation that’s still available such as drawings and permit applications, correspondence with residents – there have been complaints from owners in the past about water – as well as evidence from the site.

From what he’s seen so far, Mr. Pistorino noted that there seems to have been “a lot of delayed maintenance of the building, which should never happen.”

Questions have been raised about why the condo association waited so long to act on the consultant’s report. But Ms. Berger said that characterization is unfair.

Ms. Berger said it took time to secure a US$12-million line of credit to complete the repairs, as well as find a contractor, plus COVID-19 caused delays. Moreover, she said, there was nothing in the report that warned of imminent danger.

In November, 2018, a town official reviewed the document and concluded that the building was in “very good condition,” she said. One telling detail, she said, is that the board members continued to live in the building.

“Would any rational people who read a report and thought … it was a hazard, continue to live there, with their children? It’s not logical,” she said. “And by the way, the vice-president and her two adult sons and their families are missing right now.”