On Nov. 26, 1955, the Edmonton Eskimos defeated the Montreal Alouettes 34-19 in the first Grey Cup game ever played in Vancouver. As the 39,417 football fans exited Empire Stadium, Bob Lansdale and the other press photographers processed their film of the game in a makeshift darkroom on site. By the time he finished, Mr. Lansdale had only an hour to catch his Saturday night flight back to Toronto, leaving him no opportunity to properly dry a sink full of negatives needed to make prints later.

Thinking quickly, he wrapped the moist negatives in dripping-wet blotter paper, then bundled them in leftover bread-loaf wrappers and candy packages from the concession stands for the trip across country. But the flight was an overnight milk run that touched down in cities across the Prairies, so he was concerned that by the time the plane finally made it to Toronto, the negatives would be stuck together and useless.

“So, at every stop, I ran for the men’s washroom and filled several washbasins to separate and re-wet the films,” Mr. Lansdale recalled in the book A Funny Thing Happened on the Way to the Darkroom!, written by his wife, Margaret Lansdale. “This created quite an attraction as curious patrons in the restrooms learned of what I had in the [sinks]. They started asking all sorts of questions about the game and I ended up giving an illustrated lecture in every men’s washroom from Vancouver to Toronto.”

The shots made it into the newspapers. Mr. Lansdale’s resourcefulness had literally turned a negative into a positive. “When you’re a working photographer, you have to get the job done or you don’t get paid,” Clint Hryhorijiw, a friend of Mr. Lansdale and a fellow photographer, told The Globe and Mail. “Bob was one of a kind. He got it done.”

Robert (Bob) Lansdale, a prominent Canadian photojournalist in the stop-the-presses age of ambulance chasing and popping flashbulbs, died of a heart attack on July 13 at Trillium Health Partners hospital in Mississauga, Ont. He was 90, and had been in failing health for two years.

As a press photographer in the 1950s and ‘60s, Mr. Lansdale documented a mid-century era in black and white, in a city lousy with competing newspapers. Working for press agencies with close ties to the Toronto Star and Star Weekly, his assignments ran the gamut from local fires, tea parties and robberies to trips covering army manoeuvres in wintry Churchill, Man., and overseas, where fortunate positioning and a disregard for his own welfare got him his most famous shot.

It happened on July 31, 1955. A mob of reporters and news photographers gathered on the beach at Dover, England, awaiting the arrival of Canadian marathon swimmer Marilyn Bell. The 17-year-old sensation was attempting to cross the English Channel from Calais, France.

After an epic swim of more than 14 hours, the salt-water-soaked schoolgirl crawled to the beach, landing under the high chalk cliffs and practically at the feet of Mr. Lansdale. As other photographers fumbled to load and reload their old-school flashbulbs, Mr. Lansdale cranked shot after shot using newfangled lighting. “I scooped everyone because I used strobe,” Mr. Lansdale would say later. “Many feared a short circuit could surely electrocute me while wading in the water.”

Tall, mild-mannered and cucumber-cool, he covered hot news with a knack for ingenuity and a profound knowledge of his equipment. As a commercial photographer later in his career, he handled large groups with a maestro’s authority, achieving the compliance of his portrait subjects not by bluster but with the quiet air of a professional who knew his trade cold.

“You could sense this guy had done it a zillion times before,” Mr. Hryhorijiw said. “Bob projected this incredible self-confidence that you did not mess with.”

Mr. Lansdale covered front-page 1950s breaking news that included the Springhill mining disasters in Nova Scotia, the riotous Newfoundland loggers’ strike and Queen Elizabeth’s official visits to her largest dominion. His assignments took him everywhere from Kuala Lumpur to Caledon, Ont., where a rifle-wielding farm boy went berserk on a wintry day in 1959 after his family sold his pet pony.

As Mr. Lansdale later recounted, when he arrived at the farm the police were searching for the boy outside. Reporters in the house interviewed the parents and huddled near a fireplace.

“I joined them there, but our solitude was upset when a reporter yelped, ‘He’s coming round the back!’” Mr. Lansdale recalled. “We all jumped to the window to see for ourselves and were surprised when the young man burst through the door at our backs, threatening us with his rifle.”

After a journalist escaped and ran to a gas station to phone in the latest development of the wild story, the boy ordered everyone out of the house. Thinking on his feet, Mr. Lansdale asked the agitated youth if he could go back inside to grab his fur hat. The boy let Mr. Lansdale go into the house, but the request had been a ruse.

“As I headed into the house, I quickly changed the lens on my camera to a telephoto and started knocking off shots showing the youth aiming the rifle at the officer, his parents and the reporters,” Mr. Lansdale recounted in A Funny Thing Happened on the Way to the Darkroom!

In distress and focused on the people he held at bay with his gun, the kid didn’t notice writer-photographer Russell Cooper of the Toronto Telegram sneaking up behind him. When the newsman overpowered the youth, Mr. Lansdale was able to photograph a melee that ended with the boy being wrestled into submission.

“In quick order, the youth was bundled away, the story was over, and I was heading back to the darkroom to process my exclusive photos,” Mr. Lansdale said.

With photojournalism, it is often a matter of being in the right place at the right time. “But Bob made his own luck,” Mr. Hryhorijiw said. “He thought about where he needed to be, he got there, and he nailed it.”

The middle child of three, Mr. Lansdale won a black box camera as a small boy at a fairground ring-toss booth – three throws for a nickel. Shocked that a child had won the top prize, the pitchman running the game tried to buy the camera back. The future photographer would have none of that, though it would take him a year to save up money for film.

As a teenager, Mr. Lansdale took on a paper route to finance his hobby. In high school he won a photo contest using that same box camera from years earlier and was awarded a new fold-out Kodak model.

In 1953, after graduating from Ryerson Institute of Technology (now Ryerson University), he landed a job with Federal Newsphotos of Canada, which distributed photo packages to dozens of newspapers across Canada. While on assignment in Europe, Mr. Lansdale got a rush message to head to the French coast to join the crew covering Ms. Bell’s attempt to become the youngest person to swim the Channel.

After photographing Ms. Bell’s kickoff in Calais, Mr. Lansdale was mistakenly marooned when the boats took off to tag along aside the story-making swimmer. “Left behind with no money and no passport I was in a real predicament,” he recalled in A Funny Thing Happened on the Way to the Darkroom!

Luckily, a boat was sent back to Calais to retrieve a jar of lanolin grease to fend off the jellyfish that were stinging Ms. Bell. Mr. Lansdale hopped on the boat to cover the completion of the historic swim.

At Federal, Mr. Landale earned awards (including a pair of Globe and Mail trophies for spot news) and met Margaret McGibbon Adie, his future wife, also a photographer. Friends described her as the love of his life. They were together for 45 years until she died in 2007.

In 1961, Mr. Lansdale joined Jack Marshall Ltd. Photography, a Toronto agency run by a friend and colleague. There he worked in photojournalism and as a commercial photographer shooting weddings and portraits.

“Being approachable and affable, he was a natural at candid, up-close group photography,” his son Robert said.

Beginning in the early 1960s, Mr. Lansdale was hired so regularly by the University of Toronto that he was unofficially recognized by the university community as the “U of T photographer.” His shots of superstar media theorist Marshall McLuhan on campus in 1973 showcased Mr. Lansdale’s elegant compositional skills.

In 1968, Mr. Lansdale with his wife founded Robert Lansdale Photography Ltd., which lasted until his retirement in 2002. “He did everything to make a buck,” his son said. “Gradually he was able to specialize in commercial photography.”

Although Mr. Lansdale embraced modern equipment as an economical tool for working photographers, his roots were firmly pre-digital.

“He came from an era when you had one chance to get the photograph, and then it was off to shoot something else, whether it was a horse race or a football game,” Mr. Hryhorijiw said. “The shots you took mattered. You had to be good, and Bob was one of the best.” 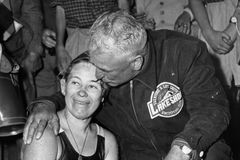