Chief of Defence Staff General Jonathan Vance has told an Ottawa court he did not take notes when he met with top officials in the Prime Minister’s Office and spoke by phone to Justin Trudeau after learning that Vice-Admiral Mark Norman was under criminal investigation.

Gen. Vance said the RCMP told him about the investigation of his second-in-command on Jan. 9, 2017. That day, Gen. Vance and the national-security adviser to Mr. Trudeau met for about five minutes with the Prime Minister’s principal secretary, Gerald Butts, and his chief of staff, Katie Telford, to inform them of what was going on.

Gen. Vance said later he received a call from Mr. Trudeau, and their conversation was brief. But there is no documented record of any of the meetings because they were all verbal and he did not take notes, he said.

Lawyers for Vice-Adm. Norman had asked whether he took notes from his conversations with federal officials. Any records of his conversations with Mr. Trudeau, his staff or the RCMP would have to be made available to the court. Defence lawyers have been trying to obtain thousands of government documents related to the case, some of which they believe will exonerate their client, but say they have met constant challenges.

His defence team has alleged political interference in the case, previously raising Mr. Trudeau’s comments – which he made before Vice-Adm. Norman was charged -- that the case would end up in court.

Gen. Vance was testifying on the second day of a three-day pretrial hearing in Ottawa that is focused on determining what evidence is relevant and what the government must disclose to the defence.

Outside the Ottawa court house, Gen. Vance told reporters he wants to ensure the military plays an “effective, correct role” in retrieving documents.

But he said he did not need to take notes on the conversations after he learned of the investigation.

“First of all, it was a shock," he said. "I didn’t think it involved us when I was getting the briefing and what I had to establish, and I didn’t need notes to do so, was two things: Is he under an active investigation, active criminal investigation, and, No. 2, are there reasonable grounds to believe that he may have committed a breach of an act of Parliament? I didn’t need to take records to establish that.”

Deputy Conservative leader Lisa Raitt raised the issue in Question Period, calling it “concerning” that there were no notes or documentation of the discussions.

Mr. Trudeau said Gen. Vance notified him of “steps being taken regarding this individual,” adding that the idea that any politician was involved in the decisions is “completely false.”

Vice-Adm. Norman’s defence lawyer Marie Henein also asked Gen. Vance on Wednesday about a list of names used in the military to refer to Vice-Adm. Norman in internal correspondence that includes Kracken, The Boss, C34, MN3 and others.

The defence team argued the use of what it called code names in internal exchanges hindered their request for documents related to the investigation.

But Gen. Vance, reviewing the list his department provided to the lawyers through an Access to Information request, said they are not code names but common abbreviations and short forms the military uses.

Gen. Vance said the use of the term “code word” would indicate a deliberate, “underhanded” attempt to hide and bury communication, saying that he saw no code words in the list.

The defence team filed the access request after a witness, whose name is protected by a publication ban, alleged in a court proceeding last month that the military used code names, making it difficult for anyone to request the documents, including Vice-Adm. Norman’s lawyers.

Gen. Vance said after he reviewed the lawyers’ Access to Information request, he alerted officials to search again and include the acronyms and other identifiers, which he said is under way.

The defence team said when they filed the Access to Information request for the list of code words, Defence Minister Harjit Sajjan’s office claimed exemption, and so the defence issued a subpoena for Mr. Sajjan’s chief of staff, Zita Astravas, who is expected in court on Thursday morning.

Vice-Adm. Norman’s lawyers have alleged Mr. Brison, who raised questions about the shipbuilding contract with Davie and led the effort to review it, was acting on behalf of Halifax-based Irving Shipbuilding.

Mr. Brison’s lawyer said a review of Mr. Brison’s personal e-mails in response to a subpoena to the Treasury Board shows no records related to Irving.

“If you’re looking for those documents, you’re not going to find them because we found nothing,” Mr. Mantas said. 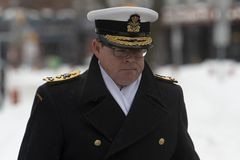 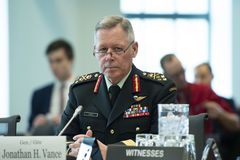