One law for motorists and another for cyclists?

People on bicycles should be allowed to roll carefully through stop signs, says the City of Montreal, which is arguing for changes to some of the traffic rules for cyclists. Although evidence suggests the idea would be safer, it is also controversial and threatens to antagonize drivers.

Mayor Valérie Plante and her Projet Montréal party came to power in the fall and are promising substantial improvements to cycling in the city, which already makes regular appearances on lists of the world’s best municipalities for people who ride. Better bicycle infrastructure is part of their goal, but so is pushing to change the rules under which cyclists operate.

If the municipal government gets its way – it cannot make the change unilaterally and has received a frosty reception from the provincial government in Quebec City, which would have to revise the law – Montreal would be the biggest city in North America to condone separate rules for cyclists. The shift would reflect the basic reality that bicycles and automobiles are fundamentally different, according to a senior official helping champion this idea.

“This kind of vehicle cannot be treated the same way as a car, and it’s illogical that it was,” said Councillor Marianne Giguère, who sits on the mayor’s cabinet-like executive committee and is responsible for sustainable development and active transportation.

“Telling cyclists that the rule says you have to do a complete stop … the message is you have to be as cautious as a car is, even though you’re a lot less dangerous.”

With the provincial government undergoing a revision of its highway law, Projet Montréal and others called for three specific changes aimed at cyclists. Under the proposals, Montreal cyclists would be allowed to follow traffic signals aimed at pedestrians, would be permitted to turn right on red at intersections and could treat stop signs as yields.

“This is one of the [ideas] that come under the category of encouraging people to ride a bike,” said Daniel Lambert, spokesman for the Montreal Bike Coalition.

The “Idaho stop,” named for the state that instituted a rule allowing them in 1982, means that cyclists must slow enough at a stop sign to be sure it is safe before proceeding. A cyclist hurtling through the intersection could still be charged.

Such an approach has been debated in numerous jurisdictions, including Edmonton, where council voted in favour of the idea in 2016. A city spokesperson said the concept is being assessed by an independent consultant and is under a joint review by Edmonton, several other Alberta cities and the provincial government.

In Ontario, the advocacy group Cycle Toronto has spoken in favour of such a change and a spokesman for the Minister of Transportation said this week she would be willing to look at such an idea. HUB Cycling, an advocacy group in British Columbia, also supports the Idaho stop, which a government spokesperson said was not being considered “at this time.”

Proponents of the Idaho stop say that it is safe and allows cyclists to maintain momentum, while acknowledging the reality of how they are using the road already. Critics say that it rewards the behaviour of rule-breaking cyclists and that there should be one law for all.

Critics have carried the debate in most North American jurisdictions, often helped by cycling advocacy groups that for decades were dominated by a faction that believed bicycles should mix with cars, as equals. In North America, legal systems also generally agree cyclists should be bound by the same traffic rules as drivers.

There has been a gradual shift in attitudes, though. Separate infrastructure for bicycles has taken root in some cities, and is credited with attracting people who would otherwise feel too vulnerable to ride. The Idaho stop, brought in there as a way to prevent scofflaw cyclists from clogging up the court, seems also to have had an effect on safety.

In the year after its introduction, a 2010 study found, the bicycle injury rate in Idaho dropped by 14.5 per cent.

“There is no single measure as quick and cost effective for increased and safer cycling than to relax stopping rules for bicyclists,” wrote study author Jason Meggs, a researcher at the University of California, Berkeley, School of Public Health.

“Stop signs and signals intended to discourage motor traffic have been placed in precisely the places where bicyclists most wish to ride … discouraging cycling and creating widespread non-compliance with a requisite backlash.”

Last year, Delaware followed Idaho in bringing in legislation to allow cyclists to treat stop signs as yields. Although these states remain outliers, most jurisdictions in North America recognize that cycling and driving aren’t really the same. Driving is a privilege in a way that cycling is not, granted only after a certain age and subject to revocation. Drivers require a road test, a licence and insurance, while cyclists typically do not.

However, the rules of the road are the same for both groups in most North American jurisdictions. Changing that would fly in the face of long-standing practice.

At CAA-Québec, spokeswoman Annie Gauthier said that drivers and cyclists in Montreal are not ready for such a shift. She argued that the city’s cycling infrastructure is insufficient and warned that such a change would exacerbate an already tense situation on the roads.

“All users should respect the same rules,” she said. “There’s a level of frustration already and, I think, at this point, it would not be welcomed by motorists to say there are special rules for cyclists.”

The spokesperson for Transport Minister André Fortin did not return calls. According to media reports, the minister is opposed to cyclists rolling through stop signs, although proponents of the change hope public pressure might change his mind. If not now, they argue, the change must come eventually.

“We want equity in the safety code, not equality,” said Suzanne Lareau, chief executive of Vélo Québec. “A bike [doesn’t have] as much weight as a car, you don’t go as fast as a car, you have better peripheral vision. It’s not the same and we have to take that into account when we manage the law.” 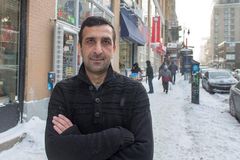 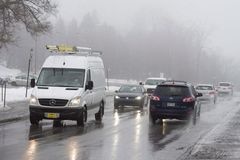 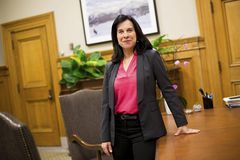