Roughly 1.2 million people in Canada, many of them from affluent neighbourhoods, spent at least one night away from home over the holidays even as governments were urging people not to congregate, according to an analysis of location data.

In the weeks leading up to Christmas, public-health experts and governments repeatedly warned that holiday gatherings would only increase the rising number of COVID-19 infections.

The analysis, compiled by marketing research firm Environics Analytics for The Globe and Mail, looked at a database of location data from 20 million mobile phones. In an attempt to quantify the number of people gathering indoors, the firm looked at the percentage of people staying outside their neighbourhoods for at least one night between Dec. 23 and Dec. 30, then tied that data to census demographic information by postal code, building a profile of the average holiday traveller.

Nationally, the median age of people living in neighbourhoods with holiday travellers was 48. They earned an average household income of roughly $118,600, and most – roughly 70 per cent – were homeowners. They were overrepresented in occupations such as business and finance, education and government, and only a third belonged to a racialized group. While roughly a quarter were single people, many were in households with three, four, five or more persons.

Combined, these figures paint a picture of the kind of Canadians who travelled most over the holidays: wealthy, predominantly white families.

Past studies have shown that neighbourhoods with a large number of blue-collar workers have higher day-to-day mobility rates than other areas, but that’s not what the overnight travel data shows, said Environics Analytics director Vito De Filippis.

“We’re seeing the opposite trend in this data,” he said. “Any way you slice it, it’s not [essential workers], it’s the higher-socioeconomic-status families, it’s seniors and singles and couples – young people.

“There is a trend we see with higher-socioeconomic-status families, this idea of personal control,” he added. “These people are quite successful in their careers and in life, and so they think, ‘I have control over my own destiny, and the decisions I make are the right ones.’ ”

Proportion of people in each

Proportion of people in each 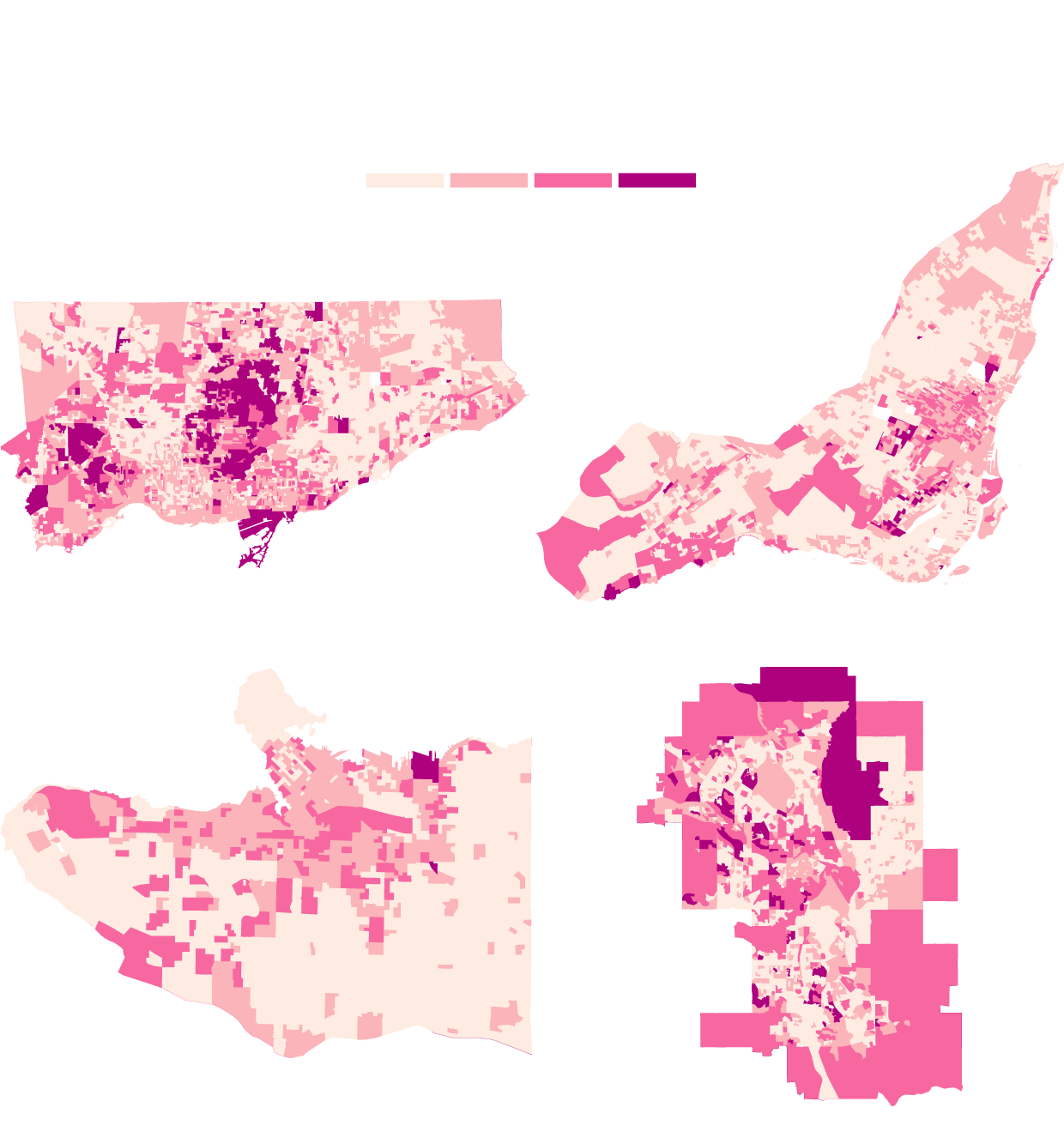 Proportion of people in each neighbourhood

who travelled during the holidays

“That’s a bit of a dangerous thing during a pandemic.”

Mr. De Filippis said the report wasn’t all negative, however. While Environics estimates 3.3 per cent of Canadians travelled over the holidays, most provinces saw a drop of at least 50 per cent in overnight holiday travel compared with the same period in 2019.

National overnight travel rates were also lower than those seen during Thanksgiving, when Canada’s second pandemic wave was already growing.

With location tracking data of this sort, Mr. De Filippis said, policymakers and public-health officials could be crafting more targeted messages. “It’s a tool in the toolkit that isn’t being used effectively.”

Zain Chagla, a professor of medicine at McMaster University and an infectious disease physician, said the socioeconomic discrepancies point to which groups see themselves as low-risk. “It’s remarkable,” he said.

Areas with large numbers of essential workers had fairly subdued overnight travel rates, Dr. Chagla noted. “Those communities are doing much of what public health is asking of them, and their burden of disease is really related to their ability to hold essential society up,” he said.

“I don’t think anyone who watched the news, read a newspaper, listened to the radio or engaged with any type of media wouldn’t know that they shouldn’t have congregated over Christmas,” Dr. Chagla said. “It suggests that even in the best of circumstances, people still have a blind spot and will make their own decisions.”

While most of Canada saw less travel during the December holidays than during Thanksgiving, Quebec saw a 15-per-cent increase. (Newfoundland and Labrador logged a 20-per-cent increase, but it has one-16th of Quebec’s population and registered low-single-digit daily increases in its COVID-19 case numbers throughout December.)

“I think there was some mixed messaging in Quebec,” Dr. Chagla said.

In the weeks leading up to Christmas, Premier François Legault first said gatherings of as many as 10 people would be permitted between Dec. 24 and Dec. 27. But he later retracted that statement as case numbers increased.

COVID-19 infections arising from holiday get-togethers have already made themselves apparent in national statistics, Dr. Chagla said, and over the next few weeks some of those people will die of complications from the disease – all consequences of decisions made more than a month ago.