The mother of a three-year-old boy who was stabbed repeatedly in the head and neck while lying in his bed has told a trial that the accused threatened her the night her son was attacked.

Clarice Smith testified that her then-boyfriend, Daniel Jensen, said he was going to have someone take her son away from her.

Jensen, 34, is charged with first-degree murder in the death of Hunter Smith-Straight, who was attacked in his Winnipeg home on Oct. 30, 2019.

The Crown alleges Jensen stabbed the boy as an act of vengeance against his mother, however, no one in the home saw the attack.

Smith addressed the court for nearly two hours Tuesday afternoon detailing the events leading up to the stabbing.

A one-way screen was brought in to shield Smith from having to look at Jensen, who sat in the prisoner’s box across from the witness stand.

During her testimony, Smith took deep breaths and answered questions with calmness, breaking into tears once when describing the last moments she saw her son awake.

Smith testified she spent the evening with Jensen, one of her sisters and her sister’s partner.

The group visited a casino and some bars and lounges while one of Hunter’s cousins babysat him at the home where Smith and Jensen lived with the toddler and other family members.

Smith said she and Jensen got into an argument while in a car on the way back to the couple’s home.

“He said I’ll get your son taken away from you,” Smith recalled.

When the group arrived at the home, Smith said she decided she wanted to leave with Hunter.

“I don’t know where we were going to go, but I was going to take [Hunter] somewhere ... because I didn’t feel safe with Dan,” Smith testified.

Smith told the jury she went into the bedroom where the three slept and dressed Hunter in a sweater and sweatpants. Then a friend came and convinced her to go to a bar at the Northern Hotel, so she put Hunter back to sleep.

Smith testified Jensen later became jealous when she chatted with some acquaintances at the bar.

She said she then told Jensen she was moving with Hunter back to her home community of Manigotagan, about 150 kilometres northeast of Winnipeg, without him.

Smith told the jury that Jensen assaulted her, left the bar and she didn’t see him again that night.

When she returned home, Smith said she was greeted by first responders and police escorted her to the hospital to be with Hunter.

Court previously heard Brenda Smith, one of Hunter’s cousins, called 911 when it was discovered that Hunter had been attacked.

Hunter was taken to hospital and placed on life support due to brain damage from severe blood loss. He was removed from the machines three days later and died.

Court also heard from a Winnipeg police officer who helped with the early stages of the investigation.

Det. Sgt. Ward Gordon was tasked with interviewing and collecting a blood sample from a witness who was at the home the night the toddler was attacked.

Gordon told the jury that he was also assigned to find old addresses of Jensen, who became an early suspect. 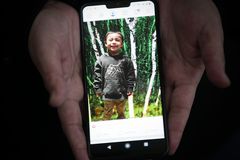 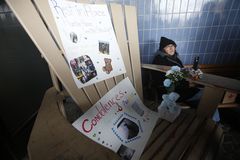 Three-year-old boy who was stabbed in Winnipeg to be taken off life support
November 1, 2019