Generations of Canadian politicians filed into an Anglican cathedral in snowy downtown St. John’s on Thursday to honour a man described as a one-of-a-kind political figure whose influence will outlast his lifetime.

John Crosbie, who died last Friday at the age of 88, was remembered at the state funeral as a patriot who played a key role shaping Canada.

Former prime minister Brian Mulroney delivered a eulogy highlighting Mr. Crosbie’s contributions as a minister in his Tory cabinet, alluding to his famous sense of humour but also his devotion to his home province of Newfoundland and Labrador.

“And so we say goodbye today, au revoir, to the Hon. John Crosbie – patriot, senior cabinet minister, devoted partner to his beloved Jane,” Mr. Mulroney told mourners at the Anglican Cathedral of St. John the Baptist in St. John’s.

He remembered Mr. Crosbie as a loving father, grandfather and great-grandfather, but also an “indomitable defender of the people of Newfoundland and Labrador, and a proud Canadian who served his country with high distinction, unblemished integrity and unprecedented achievement.”

Mr. Mulroney was among a large cast of past and present politicians from Newfoundland and beyond who came out to pay their last respects to the man who also served as Newfoundland and Labrador lieutenant-governor.

Prime Minister Justin Trudeau, who after Mr. Crosbie’s death hailed him as “a true force of nature,” attended the service, as did former prime minister Joe Clark and a number of former premiers of Newfoundland and Labrador. Mr. Trudeau did not speak with reporters on Thursday.

Former Quebec premier Jean Charest, who served alongside Mr. Crosbie in the Mulroney cabinet, had fond words on Thursday for his friend and former colleague, who he said “defined Canadian politics” when he was in Parliament.

“The country will never be the same, will it?” Mr. Charest said before entering the church. “There will never be another person like John Crosbie, ever. We will miss him.”

Former Newfoundland and Labrador premiers Paul Davis and Danny Williams called Mr. Crosbie an inspiration. He “embodied what we are” as a province, Williams said.

“We’re proud of our culture and our humour, but I think John also showed that Newfoundlanders and Labradorians are intelligent people and big contributors to the Canadian culture,” Mr. Williams said.

Seated at the front of the church near Mr. Charest, Mr. Mulroney and other colleagues, Mr. Tobin said the group swapped memories of their colourful friend.

“We were having a few chuckles,” Mr. Tobin said. “We were remembering some things that we probably wouldn’t remember publicly about John, some of his lines, some of the cut and thrust and debate with him, and so on, but everything said with total affection. He was a wonderful guy.”

Other Newfoundland celebrities including hockey broadcaster Bob Cole and comedian Rick Mercer came out to pay their respects.

Mr. Mercer remembered filming comedy segments with Mr. Crosbie and said he stood apart from other politicians, who needed far more coaching on how to be funny.

“It was like dealing with another comedian,” Mr. Mercer said. “He had impeccable timing. He came prepared, he knew what he wanted to do and therefore it was always a great day at the office.”

Mr. Crosbie leaves his wife, Jane, and children Michael, Beth and Ches, who is leader of Newfoundland and Labrador’s Progressive Conservative party.

Even during the sometimes sombre funeral service, Crosbie-isms shared by speakers drew big laughs. His son Ches said in a eulogy that his father was an avid reader, and later in life, when asked what he was reading, he would reply: “The Bible. I want to be ready for my final exam.”

Ches Crosbie praised his father as “loyal to the core,” saying he did not let partisan differences get in the way of helping others.

“For my father, politics was a calling to service,” he said. “He did it oh, so well.” He cited the late Mr. Crosbie’s promotion of free trade and the Hibernia offshore oil development as cornerstones of the province’s economic development. 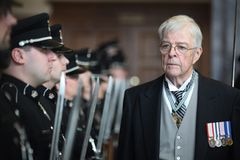