Ontario’s Ministry of Labour has five active investigations at Amazon facilities in the province, in addition to one recently completed at a company warehouse in Brampton that the local public-health unit shuttered after 617 workers tested positive for COVID-19 since October.

Two of these investigations are at Amazon locations in Bolton and another Brampton facility, on Steeles Ave., the ministry said Tuesday, in response to questions from The Globe and Mail. Those probes are related to COVID-19 protocols. Three further investigations are under way – related to occupational health and safety – at Amazon locations in Concord and Scarborough.

The investigations show scrutiny over health and safety issues at other Amazon facilities, beyond the Brampton one on Heritage Road, which Peel Public Health effectively closed on March 13, ordering all its nearly 5,000 workers to self-isolate for 14 days in what is believed to be the largest shutdown of its kind in Canada. The unit said it had determined that high-risk exposure to COVID-19 for everyone working at the Brampton facility “cannot be ruled out.” As of Friday, the case count had risen to 622.

In addition to Ministry of Labour investigations, The Globe has learned of COVID-19 cases at other Amazon facilities in Ontario. The company’s warehouse in Bolton had more than 100 workers test positive for COVID-19 as of the end of last year, freedom of information requests show. There have also been cases at its Mississauga facility, the mayor’s office said. Amazon won’t say how many cases there have been at its facilities in the province, and Peel Public Health would not provide case numbers for facilities other than Brampton.

A lack of transparency about COVID-19 in workplaces is cause for concern, said Natalie Mehra, executive director of the Ontario Health Coalition, an advocacy group that lobbies for public-health care. Inadequate information makes it difficult for workers to protect themselves, for the public to assess whether prevention efforts are working, and for family members and the community to understand where transmission is occurring.

“The more public information there is, the better people understand what the risk is of contagion,” she said, especially as the province enters a third wave of cases and more contagious variants increase.

Freedom of information responses give some indication of cases. One request about inspections filed in December to the Ministry of Labour includes a Nov. 28 field visit report about Amazon’s Bolton facility. Citing the company, the report pointed to 137 cases at the time. “The employer is aware of 137 workers that have tested positive for COVID-19,” it said. “Public health is involved in investigating the cases.”

A separate freedom of information request to Peel, filed late last year, asking for the largest workplace outbreaks reported to the region’s public-health unit, found that as of Dec. 4, Amazon’s Bolton facility had the highest total, at 107 cases (a different number than in the province’s report, but still totalling more than 100).

When presented with these case numbers, Amazon said last week “this isn’t accurate,” but wouldn’t provide further numbers or details. Amazon would not provide case numbers by facility to date, saying they “fluctuate from day to day and don’t provide an accurate picture.” It added that its facilities in Mississauga and Bolton “are not in outbreak.” (Peel Public Health says a workplace outbreak may be declared if there are two or more cases in the workplace that can be linked, within a 14-day period.)

Amazon’s Mississauga facility, west of Toronto, has had COVID-19 cases in the high double digits since the pandemic began, and cases are in the single digits currently, said Daniel Bitonti, spokesperson for Mayor Bonnie Crombie’s office, based on numbers the company had provided.

In addition, there have been 88 cases at Amazon facilities since November in the city of Toronto, its public-health unit told The Globe Friday. Toronto Public Health said it has not declared an outbreak at any Amazon facility since the pandemic started, and investigations have shown no evidence that cases were linked within a workplace.

For staff inside these facilities, a lack of transparency is adding to work stress, said one worker employed at the company’s Scarborough facility since September. The Globe granted the worker anonymity because of fear of workplace reprisals.

The company has implemented many health and safety measures, the worker said – making hand sanitizers available, installing Plexiglass dividers and having safety co-ordinators remind people to stay six feet apart. Productivity targets, however, have only grown with rising consumer demand, increasing pressure on staff to move quickly, the worker said. And although they receive frequent text notifications (copies were provided to The Globe) whenever a worker in the facility has tested positive, there is little detail about where the person worked in the building, what shift and the risks of exposure.

Now, with the Brampton shutdown, the worker said, staff are even more concerned, both from learning of the high numbers in that facility – and not knowing about total case numbers in their own – and from expectations their workloads will increase to compensate for the two-week Brampton shutdown.

Amazon said in a statement Tuesday that the health and safety of its employees is “always its top priority.” When asked for comment on past or current investigations at Amazon facilities, it referred to a recent one, at Brampton’s Heritage Road location, saying it has “fully co-operated” and that it is “in good standing” with the ministry over that facility.

The company has said it has invested more than $17-million in safety measures at Brampton alone, and made more than 150 process changes, such as increased testing and sanitizing. Amazon did not respond to repeated requests for an interview with a company spokesperson.

Regarding the shutdown in Brampton, Amazon repeated it would appeal the decision to order all shifts cancelled. As of Tuesday, no appeal had been filed, a representative for Ontario’s Health Services Appeal and Review Board said.

The company also said the Ministry of Labour has “offered advice for smaller-scale areas of improvement, which we immediately implemented,” at the Brampton Heritage Road facility.

Copies of ministry inspections, event information forms and field visit reports for Amazon facilities late last year, obtained through freedom of information, show a range of COVID-19-related health and safety complaints. Among those listed in the reports: workers weren’t staying six feet apart, a lack of access to hand sanitizers, a dearth of information about when a co-worker tests positive and the number of cases, and a lack of training in what to do if a worker tests positive.

“We take all concerns very seriously,” Amazon said in an e-mail Tuesday.

The world’s largest online retailer has come under fire in the United States over its safety record during the pandemic. Last month, New York State’s Attorney-General filed a suit alleging “flagrant disregard” for health and safety requirements at two facilities.

Workers have contracted the virus in Ontario, but they’ve hardly filed any workers’ compensation claims. There have been fewer than five approved claims in Ontario, and fewer than five not allowed, according to the Workplace Safety and Insurance Board as of Tuesday. There have been no exposure incident reports for Amazon, the board said (which can be filed when a worker thinks they may have been exposed to the virus at work).

“We have educated Amazon on their obligations to properly report these claims and continue to monitor,” WSIB said.

Gagandeep Kaur, organizer at the Warehouse Workers Centre, said many workers may not know they can file for workers’ compensation, especially given that many are new Canadians or international students, and are unfamiliar with the system or reluctant to file because of language barriers. 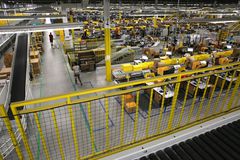 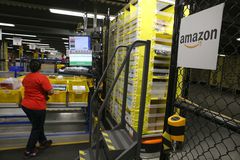