There’s not a lot of ho-ho-ho along Santa’s Village Road these days.

Docks have been torn away, boats left in boathouses crushed into ceilings and so much debris is pinballing down the swollen Muskoka River that anyone who isn’t an actual owner – or working for an owner – of the hundreds of cottages along Lake Muskoka are forbidden to venture out on the water.

A state of emergency still exists in Bracebridge, although it has been lifted in Huntsville, another “Cottage Country” town some 30 kilometres upstream and to the north.

Each morning, Bracebridge Mayor Graydon Smith rises, dresses and drives out Santa’s Village Road – so named after the main tourist attraction in this town that brags it sits on the 45th parallel and therefore is “Halfway to the North Pole.”

He pulls over by his family’s blue-and-white-trim boathouse and checks how high the water had risen – halfway up the windows Friday morning – and takes some photographs so he will have a record of what he believes to be a record flood. Worse, even, than 2013, when homes were lost entirely.

After checking the boathouse, Mr. Smith goes to the falls that rumble through town with the noise of a passenger jet taking off. He takes videos and sometimes posts them on social media, aware that the majority of cottage owners along Lake Muskoka do not live year-round in the area and want as much information as possible.

At 9 a.m. he presides over an emergency meeting at the fire hall with district officials, police, first responders and now even the Canadian military in attendance. At 11:30 a.m. he holds a news briefing that includes information on the stranded nearby community of Fraserburg and various road closings – Santa himself is unable to get to his village because of a washout not far from Mr. Smith’s boathouse.

This has been going on for more than two weeks now, the longest such stretch in memory. The Mayor of Bracebridge has had precious little sleep.

“How tired I am is irrelevant,” he says. “I may be tired, but I’m not as tired as a lot of people trying to save their properties.”

Bracebridge has been hardest hit because it is just before town that the two branches of the Muskoka River merge. The branch that runs through Huntsville peaked and began to recede this week, the state of emergency called off by Huntsville Mayor Scott Aitchison. A second branch carries the water from Lake of Bays and, beyond that, the Oxtongue River, which is still swelling with the later snow melt of Algonquin Park.

On Friday, Ontario Premier Doug Ford, who also has a cottage on the waterway, made his way to the region to see for himself and met with Mr. Smith. Mr. Ford said the damage from the flooding breaks his heart.

There has been criticism on social media and certainly in the area’s bars and coffee shops that the provincial Ministry of Natural Resources, which controls the flow as much as possible, did not anticipate such volume, although it was known there was much greater than usual snowfall in the vast provincial park.

“People complain that the MNR did not react quickly enough,” Mr. Aitchison says, “but that’s just not true.

“These dams were never intended to control flooding. They were built for moving logs and for transportation reasons. They weren’t designed for flood control.”

Huntsville officials knew there would be some flooding. They’d been informed that the snowpack in the Algonquin Highlands was far above normal. Officials check the flow on the Big East River, which empties into Lake Vernon and is a main source for the Muskoka River. The flow hit 183 cubic metres a second just before Easter. In 2013, the force was much higher but the waters receded faster.

“This,” Mr. Aitchison says, “was a very different event.”

Mr. Smith agrees. He regularly checked the levels on his boathouse back in 2013 and “This,” he says, “has exceeded that by a wide margin.”

Mr. Smith has heard the complaints of mismanagement and unpreparedness, as well, and while he refuses to point a finger any specific direction, he says, “I’m sure there are questions to ask regarding water management.”

Another local mayor, Phil Harding of Muskoka Lakes Township, has publicly declared that the Muskoka River water-management plan is sadly out of date and needs revising. The plan, which came into effect in 2006, was extended another five years in 2016 by the provincial government. The error, Mr. Harding says, is that they “used data from the eighties or nineties, absent of climate-change information.”

Back in Huntsville, while the water levels have dropped, the damage is still being assessed. Several local businesses remain closed. A handwritten sign on the window of Moose Delaney’s Bar and Grill says, “Sorry for the inconvenience.” A much larger and professionally lettered sign on the bar says, “Local and loving it since 1995.”

Maybe not so much lately.

Across the river from Moose Delaney’s, Sandra Pizzale watches as friends and family clear away the last of the sand bags they used to protect her son Gio’s affogato café, which sells gelato and other treats by the town dock.

The water rose to lick at the feet of Margarite, the café’s wood-carved bear that stands at the entrance.

“Margarite the Bear saved us,” Ms. Pizzale laughs. “She wouldn’t let the water rise any higher.”

The relief is palpable, but so, too, is the concern.

“In 2013, they said it was a 100-year flood,” the Huntsville-based chartered accountant says. “And here we are six years later – and it’s worse.

“We’re just trying to get back to normal.”

Floods finally subsiding across eastern Canada: ‘Now you get into the long slog’
Subscriber content
May 3, 2019 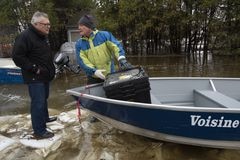 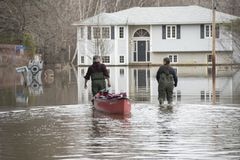 Before and after images show the scale of devastation in flooded parts of Quebec
May 2, 2019 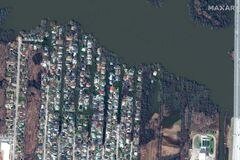