Jennifer Wigglesworth was climbing the Panty Wall the first time she started questioning the naming practices of her sport. At that famous cliff in Red Rock, Nev., almost every route name refers to women’s underwear.

This was mild compared with the names the Queen’s University graduate student turned up in a search back home in Ontario. A popular climbing cliff on Crown land near Calabogie, west of Ottawa, has routes called She Got Drilled, the Reacharound and Pussy Whipped. A route in Squamish, B.C., – dubbed a “neglected mega-classic” in an online climbing forum – is called Smell of Fat Chick. A cliff near Musquodoboit Harbour, N.S., has a climb called Parade of Whores. Some names have racist or homophobic connotations. Others sound innocuous, until you look up their sexual meaning on Urban Dictionary.

For obvious reasons, names such as these make many members of Canada’s growing rock-climbing community cringe. As the sport becomes more diverse, more climbers such as Ms. Wigglesworth are calling for a scrubbing of offensive names – no easy task for a sport prided for its rebel, free spirit.

They are challenging a hallowed practice: the right of the person who creates the route – known as the “first ascensionist” – to name it as they choose. Creating new routes often requires clearing a path on a slippery rock face and then drilling metal bolts into cracks so future climbers can clip their ropes to them to protect from falls. Given that climbing is a traditionally male-dominated sport, the majority of first ascensionists are men.

Sean Therien, the owner of Ground Zero Climbing Gym in Dartmouth, is a veteran route developer who has earned that title dozens of times over his 30 years of climbing. In 2010, he and his climbing partner came up with the previously mentioned Parade of Whores.

In an interview, he suggested that if people knew how hard it was to create new routes, they might relax about the names, so he sets the scene: He had been hanging off the cliff in the rain for five hours. His knuckles were raw from clearing moss, his shins were sliced bloody, he had cramps from his climbing harness.

Hanging off the cliff a short distance away, Mr. Therien’s climbing partner remarked wearily, “We deserve a parade.”

“Yeah,” Mr. Therien quipped back, “a parade of whores.”

So Parade of Whores went down on a piece of paper, attached to a map, and, according to tradition, was cemented into climbing lore.

“There is not a lot of thought process that goes into naming a route," he says. "Words blurt out of your mouth, and whatever comes out you write down.”

While names are often inspired by some quirky detail specific to that day’s climb, route developer Leslie Timms, the owner of On the Rocks, a guiding company that offers courses and tours on the Niagara Escarpment, says she is still careful to make sure her choices won’t don’t cross the line. “The reward is you leave your mark,” she says. “You want the name to reflect the work you put into it, and even a bit of yourself.”

That doesn’t mean names have to be serious – her contributions include sillier monikers, such as Whoopie Cushion (“A rock at the bottom made a noise like a fart,” she explains) and Sleep Husky, named for her climbing partner’s dog, who dozed at the foot of the cliff.

Routes are not always labelled by name – on a visit to Calabogie, there were no stone markers for the most egregious of the lot – but they are listed online so climbers can find and rank them, and post in forums about the routes they successfully ascend.

“Especially if it is a beautiful climb, and you would love to tell everyone about it,” Ms. Timms says. “It really sucks if it has a crappy name.”

“The hard thing is that if you mention being offended, people think you can’t take a joke,” says Geneviève de la Plante, a climber in Montreal who is co-ordinating the Bring In the Girls campaign, to teach more women how to create routes.

“I don’t think it’s bad intentions,” she says of the motives behind the names. But changing them – ideally with the permission of those who first named them – “would be a big gesture to show the women that they are welcome in climbing.”

Ms. Wigglesworth is researching women in climbing for her PhD and has interviewed more than two dozen female climbers about their experiences, including their views on route naming. Reflecting mixed opinions within the climbing community as a whole, some women reported viewing the names as funny, others described them as a bro-culture tactic to make women feel as though they don’t belong. Some female climbers said that they avoided certain routes entirely because of their names. Many of her interview subjects, Ms. Wigglesworth says, were frustrated that there was no easy fix to change them, especially since the names often only appear online or in guide books passed around by veteran climbers.

The global climbing community has long wrestled with controversial names. It took decades to change the name of a mountain near Canmore, Alta., from Chinaman’s Peak, to Ha Ling, after the Chinese cook who, according to local lore, won a bet in 1896 that he couldn’t plant a flag on its summit in 10 hours. In Sweden in 2010, the national climbing association announced plans to ban offensive names, following publicity about the number of routes with names inspired by Hitler’s Third Reich. (Kristallnacht was one; Crematorium, reportedly another.)

After Ms. Wigglesworth posted a blog about her findings, one argument she heard was that the worst names were decades old, and from a different time. Except, she points out, the route names in Calabogie are only about four years old.

Climbing a route called Hakuna Matata in Calabogie on a June weekday, a short hike along the rock face from Pussy Whipped, Ryan McCaig acknowledged he avoids bragging online if he climbs ones with some of the more distasteful names. But, aside from approaching the climbers who named them, he’s not sure how they can be changed. “I think it’s just young bros,” he says. “Most people roll their eyes at it. They probably regret it later.”

Mr. Therien, however, is unrepentant. Racist names, he says, should definitely be changed. But he mentions a classic Nova Scotia climb called The Heavy Petter, and another one named Penis Envy, which, don’t appear, he says, to have prompted controversy yet. “Who decides what’s offensive and where to draw the line?”

It appears that in the case of Parade of Whores, the line has already been drawn. He says he’s heard a new Nova Scotian guide book will refer to his route only as Parade, and the cliff where it exists, once known as The G-spot, will be rebranded The Spot. “I find it sad,” Mr. Therien says, “that people can’t just be more mature, and say, ‘Hey, that’s route got a spicy name.’ ”

Opinion
Without civilian oversight, sexual-assault survivors in the military will not be well served
June 14, 2019 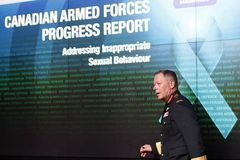 The deadly effects of a world designed for men
Subscriber content
May 29, 2019 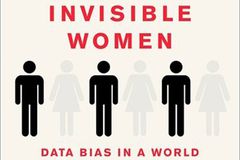