A long-anticipated attempt by NASA’s OSIRIS-REx mission to snatch a handful of a small asteroid went off without a hitch on Tuesday, though scientists have yet to learn how much, if any, of the precious material the spacecraft collected.

On Tuesday afternoon, jubilant mission controllers confirmed that the robotic probe had successfully enacted a complicated touch-and-go or TAG manoeuvre, drawing close to and briefly making contact with the asteroid Bennu, a 500-metre-wide ball of rubble that could hold clues to the origins of the planets and the chemical ingredients that allowed life to emerge on Earth.

At that point, the spacecraft uncorked a bottle of pressurized gas that was intended to churn up a cloud of dust and small particles in hopes of drawing in some of the debris.

Canada is a partner in the international mission and is slated to receive a 4-per-cent share of whatever OSIRIS-REx manages to bring back during a scheduled return in 2023.

"The spacecraft did everything it was supposed to do. We’ve tagged the surface of the asteroid,“ declared Dante Lauretta, a planetary scientist at the University of Arizona and principal investigator for the mission, during a live broadcast on NASA television.

Whatever comes of the attempt “is up to Bennu now," he added.

Mission team members said that by Wednesday they should have images from the spacecraft that can tell them if the asteroid’s surface was disturbed. By the weekend they also expect to have the results of a spin test during which the spacecraft will twirl around to see if there’s anything inside its sample canister and, if so, estimate the sample’s total mass.

“I’m thrilled. There’s tremendous excitement that we’ve got to this point, but it’s tempered by knowing that there’s a long way to go to bring some of the asteroid home,” said Tim Haltigan, senior mission scientist for planetary exploration at the Canadian Space Agency.

Canada provided a laser altimeter for the mission, which was developed in Toronto and built by MDA Corp. After OSIRIS-REx arrived, the altimeter was used to scan the asteroid’s rugged surface, creating a detailed three-dimensional “shape model” that allowed scientists to hone in on potential target sites for a sample acquisition attempt.

A technical failure of the device earlier this year prevented further mapping operations, but by then the final target site, dubbed “Nightingale,” had already been selected. Dr. Haltigan said that the instrument team has assessed the probable cause of the failure and that the laser altimeter “accomplished its mission.”

From the outset, the goal of OSIRIS-REx has been to capture at least 60 grams of the asteroid – enough for years' worth of investigations in laboratories back on Earth. The sample canister on board the probe can hold up to two kilograms.

Bennu was selected as a destination for the OSIRIS-REx mission for a combination of reasons, including an orbit that repeatedly brings it near to Earth’s. It is also thought to be an extremely ancient body that has changed little since it formed more than 4½ billion years ago. During a two-year surveillance of the asteroid, OSIRIS-REx detected carbon-rich minerals and clays, suggestive of a diverse but primitive composition that may resemble the material from which Earth first accreted in the early days of the solar system.

For those involved in the mission, the day unfolded in a way that would have been difficult to imagine when OSIRIS-REx was launched in September, 2016, or first arrived at Bennu in December, 2018. Because of the COVID-19 pandemic, there was no opportunity for a mass gathering of scientists at mission control with media looking on. Instead many team members, including those in Canada, connected in a group video chat and compared notes with colleagues as the capture attempt took place.

“That was really nice. It made it feel like we were all watching it together,” said Manar Al Asad, a research scientist at the University of British Columbia who has worked on the mission for the past four years.

“I saw people cheering and jumping up and down and I knew it had happened even before it was announced,” she said. “To see the team ... to see tears welling up in people’s eyes ... it was very exciting to witness.”

NASA has scheduled a science briefing to discuss initial findings following the close approach to Bennu and the sample capture manoeuvre on Wednesday afternoon.

Atom probes and framboids: What a Canadian meteorite says about the left-handed molecules of life
May 12, 2020 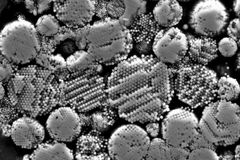 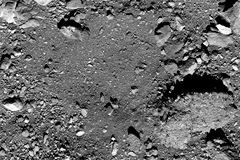