A Quebec judge will hear a request for a stay of proceedings from former deputy premier Nathalie Normandeau and her co-accused, who were charged in 2016 following a corruption investigation.

The parties are to appear in a Quebec City courtroom in March to discuss what the defence argues are unreasonable delays in the case. The challenge invokes the Supreme Court of Canada’s Jordan decision, which set strict timelines for cases to get to trial.

Arguments will begin on March 16 and if successful, could spell the end of a case involving the alleged awarding of public contracts in exchange for political financing that began with several arrests in 2016.

“We’ve all joined the request made by Ms. Normandeau where she asked for a stay of proceedings because the trial was not held within a reasonable time,” defence attorney Jacques Larochelle, who represents Cote, said outside the courtroom on Monday.

The Jordan ruling from the Supreme Court of Canada in 2016 set a limit of 18 months for cases before provincial courts to get to trial. According to Larochelle, the delays in the current case are well beyond the high court’s threshold.

In a letter sent to media last Thursday, Normandeau said the delays in her case were “cruel and inhuman,” affecting her personal and professional situation — particularly because she claims to have been a victim of a trial in the public.

The 51-year-old former provincial politician noted she’d been arrested nearly four years ago and her trial wasn’t likely to proceed before the end of 2020.

Normandeau was an influential minister who served as a Liberal member of the legislature from 1998 to 2011 and held key cabinet positions including municipal affairs, natural resources and Canadian intergovernmental affairs.

She served as deputy premier in Jean Charest’s government between 2007 and 2011.

In August, the Crown announced it was dropping more than half of the charges against her.

Five charges of fraud, corruption and conspiracy were withdrawn, with the Crown intending to proceed to trial on three counts, including breach of trust and fraud against the government.

Quebec court Judge Andre Perreault agreed Monday to assess the delays in the case and determine which parties are responsible.

Perreault dismissed a similar motion for a stay in March 26, 2018, but said at the case was “complicated.”

Noting that nearly two years have passed since that ruling, Perreault said it was “appropriate” for the court to look at the matter anew.

“As no trial has been set, I believe it is appropriate to review the deadlines ... to verify what delays are attributable to whom,” the judge said. 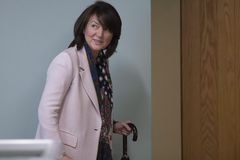