The Canadian sailors who fought a deadly fire aboard the submarine HMCS Chicoutimi in 2004 suffered from significantly elevated levels of post-traumatic stress, depression and asthma in the first five years after the tragedy, a new study says.

However, no cases of cancer were reported during that time frame, the Royal Canadian Navy confirmed Thursday, adding that a longer-term study is needed.

The commander of the navy, Vice-Admiral Art McDonald, said it was unacceptable that the long-awaited study was released five years later than expected.

“For this delay, for which I can offer no explanation … and for our failure to continue communicating routinely with the ex-crew during the intervening period, I have offered my unreserved apology,” McDonald told a news conference at Canadian Forces Base Halifax.

“We should have done better, and we will do better.”

The used British submarine, one of four purchased by the Canadian military in 1998, was on its maiden voyage to Canada on Oct. 5, 2004, when it caught fire in rough seas off the coast of Ireland.

“He and his family will forever remain in the thoughts of the Royal Canadian Navy,” McDonald said.

After the fire, virtually all of the crew spent an additional five days on the diesel-electric sub – working on equipment covered in grey soot – as it was towed to safety in Scotland.

Another group of military personnel, a 42-member contingent known as the care and custody team, provided security and maintenance for the charred submarine after it arrived in port.

Their health during the first five years was compared with the sub’s crew and a control group made up of 152 healthy submariners.

Navy officials confirmed that one crew member died in 2016, but they declined to confirm the cause of death, citing privacy concerns.

Lt.-Cmdr. Brent Jones, a naval health protection expert, said he didn’t known how many crew members had been diagnosed with cancer since 2009.

That’s why a longer-term study is so important, he said.

As well, military officials were unable to say how many crew members were still in the navy.

The study found 60 per cent of the 56 sailors aboard the vessel when it caught fire were diagnosed with post-traumatic stress within five years.

That means they were 45 times more likely to be diagnosed with PTSD than the control group, none of whom reported a PTSD diagnosis. The rate of PTSD among the custody team was one per cent.

Col. Rakesh Jetly, the military’s senior psychiatrist, said it would be difficult to say anything conclusive about the PTSD numbers.

“The reality is, it’s a number,” he told the news conference. “We don’t have a comparison group. It’s not like there’s seven similar sub fires within our NATO alliance that we can compare our rates to the other.”

However, Jetly said it was important to note that all of the submariners had been exposed to a deeply traumatizing event.

“Within seconds, in a high sea state, a complete blackout. You couldn’t see. A fire was there. There were casualties … It’s one of those events that imprints on people … The number 60 per cent? It wouldn’t be surprising if it was higher.”

The study found that between 2004 and 2009, 21 per cent of crew members reported suffering from asthma and 15 per cent were battling depression – rates well above what was found within the two other groups.

The study also found the submariners required more sick leave, and the proportion of sailors released from the military for medical reasons – 12.5 per cent – was more than double the rate for the other groups.

No cases of cancer were reported among the crew during that time period, even though the military has confirmed the sailors were exposed to a nasty chemical cocktail in the thick, black smoke that filled the vessel.

The navy shared the results with serving and former sailors earlier in the day. Officials offered them three options for a longer-term study that will look at the period between 2009 and 2019.

Over the past 14 years, many sailors have come forward to state they were worried about being exposed to fumes that are known to cause cancer, but the navy has repeatedly said the fire was extinguished quickly, resulting in limited exposure.

In May 2005, a board of inquiry determined that as the sub’s conning tower was being repaired on the surface, a rogue wave pushed a torrent of seawater through two open hatches, partially flooding two compartments and causing an electrical short-circuit and fire.

In June 2008, the navy produced a report that said the fumes and soot likely contained recognized carcinogens such as benzene, polycyclic aromatic hydrocarbons, dioxins and furanes.

And it said the crew likely inhaled cancer-causing contaminants.

”The actual risk of developing cancer will depend on the amount, or dose, of exposure,“ the report said.

The report also found that the known carcinogen Peridite – a noxious insulation adhesive – was among the materials that burned in the blaze.

At the time, military officials insisted it was unlikely crew would develop any form of cancer since their exposure was limited to the fire and the five days they spent breathing in the fumes.

Though the 2005 board of inquiry concluded that “human factors” contributed to the tragedy, the submarine’s captain and crew were cleared of any blame. 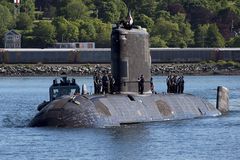 Submarines to start retiring in 2022 without billion-dollar upgrade
May 17, 2018 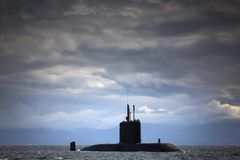