In a letter to commissioner Mario Dion, Angus says he thinks Morneau might have broken rules around conflict of interest and preferential treatment in allegedly green-lighting a $12-million contract for WE shortly after co-founder Craig Kielburger emailed Morneau about a youth entrepreneurship program in April.

That idea was distinct from the abortive Canada Student Service Grant program the WE organization was briefly entrusted with managing a few months later. It never received cabinet approval and both a Morneau spokesman and the Prime Minister’s Office say that despite some confusion on the point at the time, it didn’t get Morneau’s, either.

Nevertheless, the familiar tone of the email and the connections between the Kielburger brothers and Morneau’s family – including his participation in WE events and his daughter’s employment at the organization – speak to a close relationship that should have led Morneau to recuse himself from any decisions on the contract, Angus says.

“Over the years, both Morneau and his wife seems (sic) to have built a friendly relationship with the Kielburgers,” Angus wrote, saying they provided “a positive blurb” for his other daughter’s book and selected her to be a speaker at a WE Day event.

Angus also says the 11-day interval between Kielburger’s email request and Morneau’s alleged thumbs-up bypassed normal channels of departmental review, and that Morneau then failed to disclose that correspondence with Kielburger in testimony before the House finance committee last July.

“This raises questions as to whether this proposal which was approved so quickly was subject to preferential treatment,” Angus wrote.

Dion said in a reply to Angus he has already brought the matter to Morneau’s attention in the ongoing investigation into the ex-finance minister and Prime Minister Justin Trudeau’s role in handling the different WE agreement – subsequently scrapped – to manage a student volunteering program for $43.5 million.

A Morneau spokesman said Wednesday the then-minister never signed off on the $12-million proposal, pointing to a letter submitted to a House of Commons committee by the Finance Department’s top bureaucrat in July.

Although a “ministerial decision” document came across Morneau’s desk, he never approved it, the letter states.

Publicly released documents on the WE affair suggest some government officials thought Morneau had backed the youth program.

A finance department briefing document from April 21 – included in more than 5,000 pages the Liberals handed to the finance committee in August – states that “the minister decided to provide up to $12 million to Employment and Social Development Canada to support the WE Social Enterprise Initiative.”

A Privy Council Office memo to Trudeau on April 26 also states that “the Finance Minister has decided to fund” the program.

And a previously unreported briefing document for Morneau on May 7 reiterates a “preliminary funding decision” to support the entrepreneurship program “led by WE.”

Trudeau spokeswoman Ann-Clara Vaillancourt said Wednesday in an email “the prime minister later rejected” the proposal on May 15.

Morneau, who resigned in August, and Trudeau apologized last summer for not recusing themselves from discussions because of their familial ties to the WE organization – Trudeau because of speaking fees paid to his brother, mother and wife, and Morneau because one of his daughters was nearing the end of a one-year contract in an administrative role.

Morneau also waited until the day of a finance committee hearing in July to repay more than $41,000 in travel charges to WE Charity that the group covered for trips his family took to Kenya and Ecuador in 2017 to see some of its humanitarian work.

The ethics commissioner continues to investigate Trudeau’s and Morneau’s roles in choosing the WE organization to run the potentially $900-million Canada Student Service Grant, which the government presented as a way to help students with education expenses as they faced a summer of unemployment in a COVID-19-stricken economy.

WE withdrew from the agreement about a week after it was announced and the program was ultimately cancelled.

Liberals agree to back off delay tactics on WE Charity affair
November 16, 2020 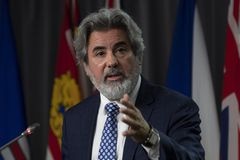