The New Brunswick Liberals have promised to freeze power rates, a populist move that drew derision from their political opponents.

Premier Brian Gallant said Wednesday if re-elected next month his government will legislate a four-year freeze of NB Power rates for residential and small business customers, and demand other efficiencies from the Crown-owned utility.

“It just feels like they’re taking a page out of (Ontario Premier) Doug Ford’s book. It sounds like a buck-a-beer kind of commitment,” said Green Leader David Coon.

“It seems that some of what Doug Ford has been doing is creating some political space that others are moving into. That’s why I say it smacks to me like the buck-a-beer approach to government, which is to throw something out there that doesn’t make any sense but has immediate curb appeal,” Coon said.

Ford won the June 7 Ontario election after, among other things, promising to drop the province’s minimum price on beer and attacking the hefty salary of Ontario Hydro’s CEO. The utility’s chief executive and all the utility’s board members resigned after the Tory win.

Campaigning for the Sept. 24 New Brunswick election, Gallant said many people’s power bills are going up faster than their wages.

“By freezing power rates, raising the minimum wage to $14, and investing in more job opportunities, we will create a fairer economy for all New Brunswickers,” Gallant said.

He said the utility will be obligated to undertake efficiency measures, and be prevented from imposing any weather tax to help pay for extreme events such as major winter storms.

NB Power has been forecasting annual power rate increases of two per cent for the next few years and has a debt of more than $4.8 billion.

The utility needs to refurbish the hydro-electric facility at Mactaquac, phase out its coal-fire plant at Belledune and begin to pay down its debt.

Gallant said he believes they can still address those things while working under a rate freeze.

“It is very possible to have NB Power be more efficient and save approximately $13 million per year. We had to do the same kind of exercise as a government,” he said.

“We reduced our own salaries as premier and ministers by 15 and 10 per cent respectively. We reduced the amount of management within the civil service by 30 per cent — which we think NB Power should be doing the same thing.”

“He’s actually trying to buy the election and he will say and do anything to try to secure an election victory,” Higgs said.

He said he believes Gallant would use revenues from a carbon tax to cover the rate hike.

Higgs said he agrees NB Power could be asked to find efficiencies, but rates should be set by the Energy and Utilities Board, not government.

“Political meddling is only kicking the problem down the road for future taxpayers,” he said.

Coon said rate freezes have been a proven problem in the past.

“That’s not responsible to freeze power rates for four years as we saw when (former Progressive Conservative premier)David Alward did that. He froze power rates and it caused no end of problems because there are costs that occur that NB Power has to address, and when the freeze came off then we got hit with significant power rate increases,” Coon said.

“To me it suggests there’s some sense of desperation in the Liberal camp. It’s not good policy. It’s not even good politics,” he said. 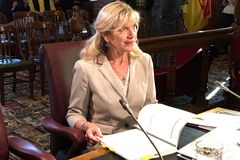 New Brunswick Tories say election will be a ‘referendum on carbon tax’
August 28, 2018 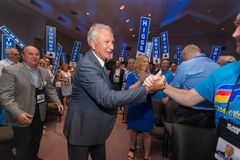 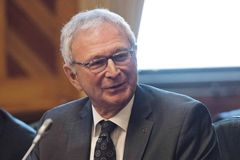