The premier of New Brunswick says discussions are under way with the federal government to provide financial relief to homeowners affected by this year’s spring flood.

Higgs said the amount of assistance has not been determined, but the government will provide advance funds to allow people to begin repairs right away.

“We’re going to make sure the relief comes as quickly as possible so I’ve asked the department to have people get their applications in as soon as possible, and we’ll do advancements,” he told reporters after getting off a flight from Ottawa.

Explainer: Here’s what you need to know about flooding in Quebec, Ontario and New Brunswick

Following last year’s record flood the province provided up to $4,000 in advance funding, but Higgs said he wants to increase that to about $15,000.

Higgs said he knows quite a few cottages – especially around Grand Lake – have been damaged by the floodwaters, but the government’s priority will be for repairs to primary dwellings.

And Higgs said an emphasis must be put on mitigation, including restrictions on building on flood plains, and raising some highways and roads that had to be closed.

“It’s a new day and two years in a row is telling us we can’t just do the same thing,” he said.

“In some cases there were highways or small secondary roads that we actually went back and repaired but still repaired them at the same level as before. Those types of things we have to change.”

Higgs said a priority would be the Trans-Canada highway where the flooding forced the closure of a section between Oromocto and Riverglade for an entire week.

“It’s obviously surrounded by lowlands. It would seem that the highway would have to be raised by two or three feet for four kilometres, or maybe not that far,” he said.

The highway reopened Wednesday but the section where the flooding occurred is restricted to just one lane in each direction and limited to 70 kilometres an hour.

Ahmed Dassouki of the Department of Transportation, said further inspections and possible repairs would have to be done before all lanes are reopened.

In total, 147 roads and highways were affected by the flooding this year, and 68 of them remained closed late Wednesday.

Dassouki said water levels are dropping and more roads would reopen in the coming days.

In the meantime, Stacey Cooling, chief of operations at New Brunswick EMO, said homeowners need to be patient.

“We understand that people are anxious to get home and check on their properties but people must continue to respect the barricades and the officials that are staffing them. Debris must be removed from closed roads and they need to be inspected by engineers before they reopen. This can take time,” she said.

Cooling said once floodwaters recede, it’s important to remove flooded items from homes as soon as possible to avoid the spread of mould.

Bill Lawlor, New Brunswick director of the Canadian Red Cross, said the agency is still providing hotel accommodations for 424 people who evacuated their homes, however that’s down from 534 at the peak.

The Red Cross has launched a fundraising effort to help provide assistance. As of Wednesday the fund had topped $290,000. 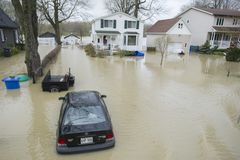 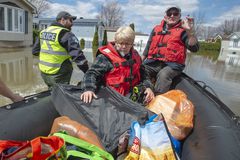 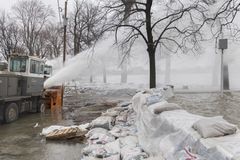