New Brunswick’s premier says his province will likely follow a promised move by Ontario to release COVID-19 modelling projections, with the information to be released sometime next week.

Blaine Higgs said meetings are ongoing and the information could be made available by Tuesday.

Higgs told reporters Thursday that he sees value in sharing the same numbers with the public that are available to provincial health officials, and he believes there should be consistent sharing of that information across the country.

“I know that Ontario, Quebec and maybe B.C. and Alberta are in different situations than we are, but nevertheless, having a consistency in information and how it’s interpreted will help us all make better decisions, and help us all learn from each other,” said Higgs.

However, the premier conceded that modelling “is not a precise science.”

“These are numbers and sometimes reality is not the same as what’s projected in numbers,” Russell said. “All we can do right now is work as hard as we can together collectively to fight this. Our success depends on that collective approach.”

Ontario Premier Doug Ford’s decision to release his province’s modelling numbers, expected to happen Friday afternoon, may put pressure on Ottawa to provide a national picture of the potential progression of the deadly virus.

Prime Minister Justin Trudeau has promised national modelling soon, but has said it would require more data from provincial and territorial governments.

Federal officials said Thursday they are hoping the data will be available within the next five days.

Health Minister Patty Hajdu estimated three weeks ago that 30 to 70 per cent of Canadians could become infected – somewhere between 11 million and 26 million people.

In Newfoundland and Labrador, Health Minister John Haggie said providing projections would be more of a challenge in his province.

Haggie said Thursday the challenge lies in the size of the province’s current data pool, which is several weeks behind a province like British Columbia, which has already released models.

He said the large cluster of cases linked to an exposure at a St. John’s funeral home last month, which as of Thursday represented almost 80 per cent of known cases in the province, skews the data.

“If you take that data out, then our numbers at the moment do not lend themselves to modelling,” Haggie said. “We’ve laid the groundwork for when that changes, so when the opportunity presents and the data is available, we will be in a position to produce models and scenarios.”

Like his counterpart in New Brunswick, Premier Dwight Ball said he would support releasing national models, but argued that no matter what they predict, measures like physical distancing are the most effective tools for creating better outcomes during the pandemic. 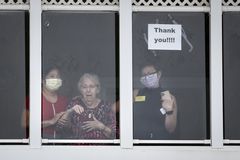 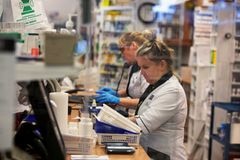